A Room of One’s Own-Thank You Virginia

A belated happy birthday to Virginia Woolf (born January 25th), a writer whose fiction I idolized when I was around sixteen. I had the firm conviction that her novels To the Lighthouse and Mrs. Dalloway, innovative, modernist, poetic, were about as good as literature got.

When I discovered Woolf’s book-length essay A Room of One’s Own, in college, I was thunderstruck. And I’ve never lost that feeling. I re-read Woolf’s arch 1929 critique of a sexist world, a discriminatory educational system, the need to nurture female talent, and I’m still pumping my fist in the air.

“A woman must have money and a room of her own if she is to write fiction.” A Room of One’s Own

Adeline Virginia Stephen was born on January 25, 1882, to Julia Stephen, a model for Pre-Raphaelite painters, and Leslie Stephen, a well-known biographer. She had seven siblings and half-siblings, and was brought up in an upper-middle-class Kensington household. That she suffered some sort of mental disorder (she was probably bipolar) was clear from her first breakdown at the time of her mother’s death in 1895. She collapsed again when her father died in 1904. In 1912 she married Leonard Woolf and in 1915 she published her first novel. Despite her recurring “madness,” she was able to publish and run Hogarth Press with Leonard and be active in the Bloomsbury literary group for the rest of her life.

That’s Virginia and her sister Vanessa playing cricket, proving that she had a lighter side.

“One cannot think well, love well, sleep well, if one has not dined well.” A Room of One’s Own

On March 28, 1941, Woolf filled the pockets of her overcoat with stones and walked into the River Ouse, near her house, to drown. An object that moved me beyond words was the simple wooden walking stick she took with her into the river, found floating near where she went in, preserved in the collection of The New York Public Library and shown in an exhibit of the library’s treasures a few years back.

“When, however, one reads of a witch being ducked, of a woman possessed by devils, of a wise woman selling herbs, or even of a very remarkable man who had a mother, then I think we are on the track of a lost novelist, a suppressed poet, of some mute and inglorious Jane Austen, some Emily Bronte who dashed her brains out on the moor or mopped and mowed about the highways crazed with the torture that her gift had put her to. Indeed, I would venture to guess that Anon, who wrote so many poems without signing them, was often a woman.” A Room of One’s Own

There is one surviving recording of Virginia Woolf’s voice. She delivered a talk called “Craftsmanship,” part of a 1937 BBC radio broadcast. 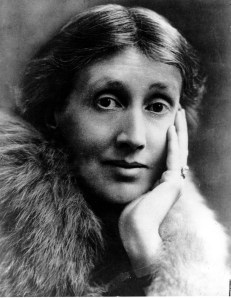 Here is Woolf’s take on Judith, Shakespeare’s erstwhile sister, also from A Room of One’s Own. Tell me if after reading this you are not also pumping your fist in the air.

“I told you in the course of this paper that Shakespeare had a sister; but do not look for her in Sir Sidney Lee’s life of the poet. She died young—alas, she never wrote a word. She lies buried where the omnibuses now stop, opposite the Elephant and Castle. Now my belief is that this poet who never wrote a word and was buried at the cross–roads still lives. She lives in you and in me, and in many other women who are not here to–night, for they are washing up the dishes and putting the children to bed. But she lives; for great poets do not die; they are continuing presences; they need only the opportunity to walk among us in the flesh. This opportunity, as I think, it is now coming within your power to give her. For my belief is that if we live another century or so—I am talking of the common life which is the real life and not of the little separate lives which we live as individuals—and have five hundred a year each of us and rooms of our own; if we have the habit of freedom and the courage to write exactly what we think; if we escape a little from the common sitting–room and see human beings not always in their relation to each other but in relation to reality; and the sky. too, and the trees or whatever it may be in themselves; if we look past Milton’s bogey, for no human being should shut out the view; if we face the fact, for it is a fact, that there is no arm to cling to, but that we go alone and that our relation is to the world of reality and not only to the world of men and women, then the opportunity will come and the dead poet who was Shakespeare’s sister will put on the body which she has so often laid down. Drawing her life from the lives of the unknown who were her forerunners, as her brother did before her, she will be born. As for her coming without that preparation, without that effort on our part, without that determination that when she is born again she shall find it possible to live and write her poetry, that we cannot expect, for that would he impossible. But I maintain that she would come if we worked for her, and that so to work, even in poverty and obscurity, is worth while.”