Feral children, wild children, human beings raised by wolves… or bears… or goats… or rats… How credible are the stories of their existence?

They’ve inflamed the popular imagination for centuries. Surely it is impossible to believe that a mama wolf will take in a human baby and suckle it with her own. Surely it is outlandish for a little boy or girl to come in from the wild, hale and fed if not very well groomed, with the claim of having been nurtured from infancy by animals. Yet their demeanor would seem to lend credence to the claim – no human language of any kind, an alien affect, absolutely zero table manners.

Stories of feral children surface  up to the present day. The archetype might originate with Romulus and Remus. 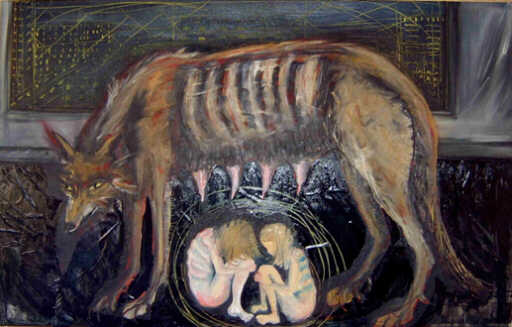 Roman legend has it that the twin sons of Rhea Silvia, a priestess, and the god Mars were raised by wolves. When it was found that she had been pregnant and had children, King Amulius, who had usurped her father’s throne, ordered her to be buried alive and for the twins to be killed. Instead, they were set in a basket on the Tiber, where a she-wolf found them and raised them until the boys were discovered as toddlers.

Probably the best known wild child today is fictional. Mowgli, invented by the protagonist of Rudyard Kipling’s The Jungle Book stories in the 1890s, became a contemporary star with Disney’s 1967 massive hit animated film of the same name. According to Kipling’s hugely successful telling, Mowgli lost his parents in a tiger attack in Central India and is adopted by Mother and Father Wolf. 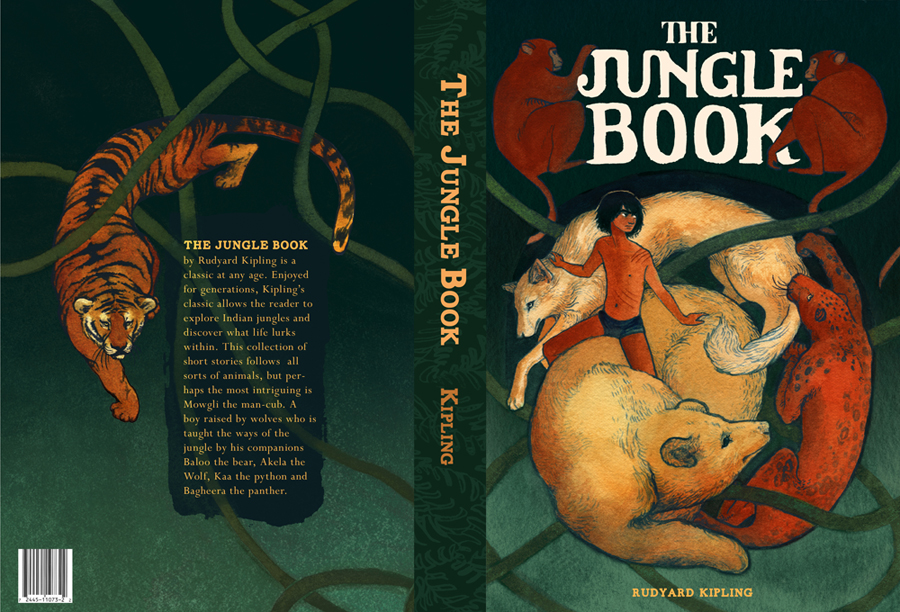 A tiger wants to adopt him, a panther befriends him, and Mowgli wins the respect of all through his unique ability to extricate thorns from the paws of his wolf brothers. 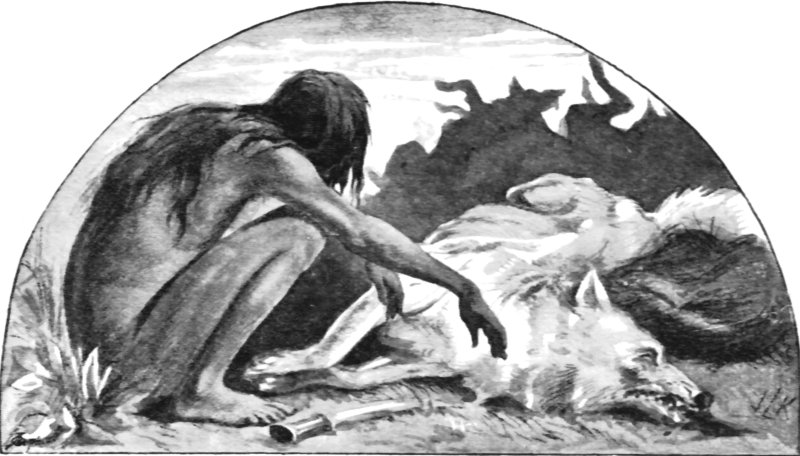 He is ultimately adoped by human parents and brought into civilized society.

In the Disney version, Mowgli, “man-cub,”  wants nothing more than to remain in the carefree forest among his baboon, elephant, sloth and panther friends, even after he has been told by many that he must return to the Man-Village. He only goes when he becomes smitten by young girl and follows her back to civilization. 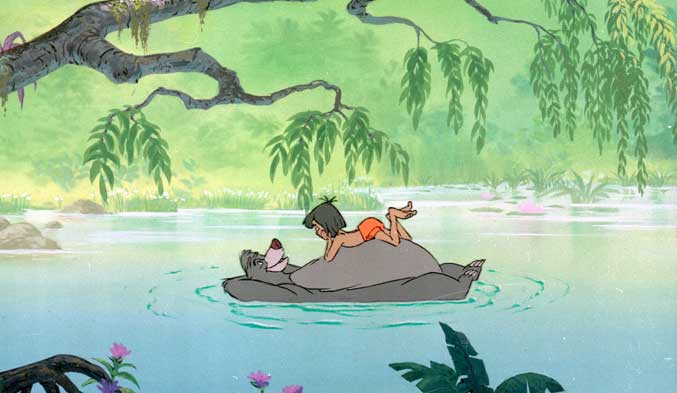 A similar feral child novel from slightly later than Kipling is Shasta of the Wolves. In Shasta, a boy raised by a pack in the Pacific Northwest goes back and forth between a human tribe and his wolf clan… ultimately deciding to stay with the pack. 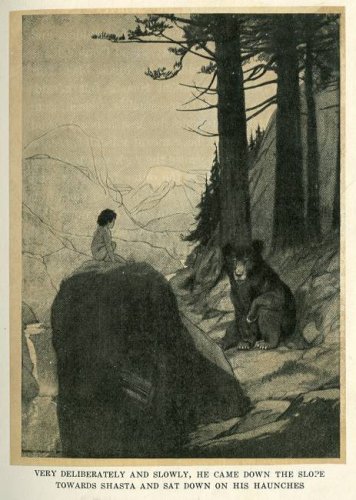 Mowgli has always been seen as a major influence on Edgar Rice Burroughs in developing his own feral child story Tarzan. 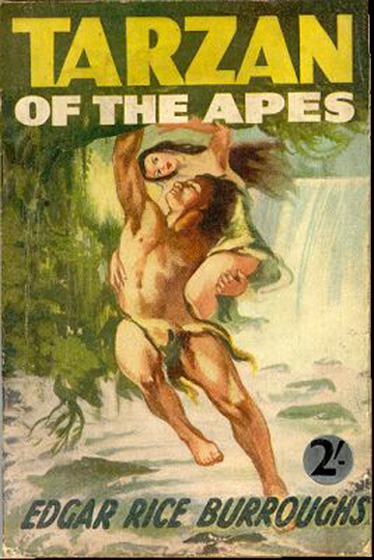 Appearing first in 1914 and followed by fully 25 sequels, Burroughs’ Tarzan of the Apes captured the American imagination. The movies expanded the franchise — Between 1918 and 2008, 89 movies starred Tarzan, with the most famous portrayal being that of Olympic swimmer Johnny Weissmuller. Tarzan is the quintessential noble savage, a man who manages to navigate two worlds with ease.

Orphaned as a child, Tarzan finds himself adoped by the leader of the ape tribe that killed his father – while Tarzan is his ape name, his English name is John, Clayton, Viscount Greystoke. As a young adult, Tarzan falls in with Jane, an American whose father and the rest of their party have been marooned in the jungle. They fall in love and he follows her back to the United States, marries her and the couple return to Africa, where they have a son. Intelligent, handsome, athletic, Tarzan lives up to his noble background though in the guise of a forest creature. His loin cloth is all he needs for clothes, a tree branch his preferred bed, raw meat the nutrient he favors. His upbringing represents the opposite of deprivation – this child of nature gained agility, speed, endurance and strength from his ape family – and yet, when he returns to civilization, he is able to adapt, learn languages, speak grammatically and make his way in civilized society.

Before the mythic creations of Mowgli and Tarzan, other, real, historical feral children fueled the public imagination. One related phenomenon is that of people afflicted with the genetic condition known as hypertrichosis, which causes an individual to resemble an animal in the growth of fur all over the body. Many children with the condition were exhibited in American side shows in an earlier period. 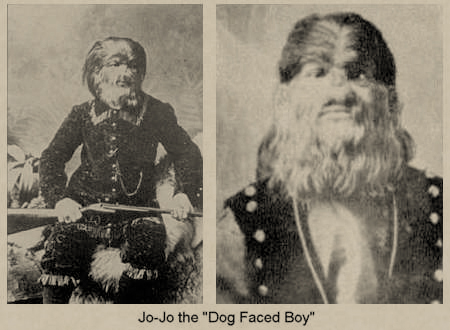 But non-hairy wild children fueled public fascination the world over. The best known, Victor of Aveyron, lived at the turn of the nineteenth century in rural France. 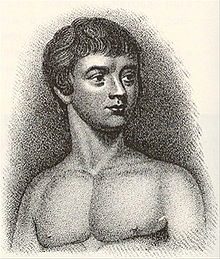 He was prepubescent when he emerged from the woods near Saint-Sernin-sur-Rance in 1798, having been spotted by a trio of hunters. How he had lived during his childhood was unknown, but that he only grunted, that he showed no modesty about his nakedness, that he periodically returned to the forest, that he had numerous scars on his body, that he seized potatoes hot from the hire, told his captors that his was a feral childhood. Shortly after he came in from the woods he was seen frolicking nude in the snow – a sign that he could tolerate exposure.That and the central feature of his existance, his lack of speech. It was clear that he could hear. A young physician named Jean Marc Gaspard Itard adopted the boy and worked with him for five years to teach the boy and the case became a cause celebre. 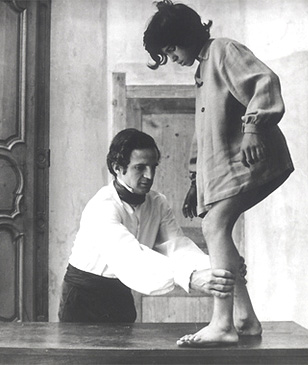 Whether the boy could learn language inflamed the debate over what distinguished man from animal. Did the Wild Boy of Aveyron exist in a pure state of nature? Could he be civilized? Ultimately, Victor learned only two phrases : lait (milk) and Oh, Dieu (Oh, God). Itard published his A Historical Account of the Discovery and Education of a Savage Man in 1802. Today we know of Victor and kindly Dr. Itard through L’Enfant sauvage, The Wild Child, Francois Truffaut’s masterful 1970 film.

Peter of Hanover wandered out of the woods near the town of Hamelin, near Hanover in Germany, in 1726 — or was hunted down; accounts differ — and soon became the talk of Europe. He was around fourteen, naked, mute, and resistant, when he arrived in London and came under the protection of King George I and his court. The child had a predilection for acorns, and was fascinated upon hearing a watch strike the hour for the first time. George I did not speak English himself, and hailed from the same part of Germany as this mysterious wild child, explaining some of his attraction. 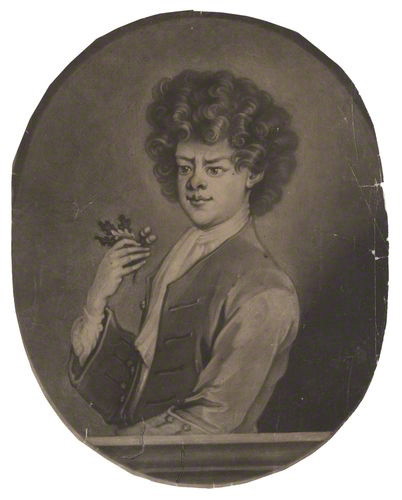 Plus, anthropology had come in vogue, with people bringing back accounts from foreign lands about savages, Hottentots, children reared by animals. Was Peter truly human or was he more along the lines of an orangutang? The media went wild over Peter, commenting on his primitive demeanor, wondering at his forest upbringing, marveling that the King adopted him as a kind of court pet. Writers hailed him as a wonder of nature and his likeness thrilled visitors to a celebrated was museum. Daniel Defoe proclaimed him the only truly sensible person alive. Peter never learned to utter a word, and eventually spent a long life being cared for on a farm in the country.

Another feral child was even more mysterious. Kaspar Hauser simply appeared one day in 1828 at the city gate of German’s Nuremberg, strangely dressed and, once again, mute. 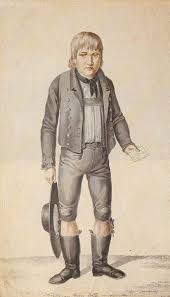 He was around 17, and he carried a letter asking that he be given a place in the calvary. He could write his name, but he would eat only bread and butter and preferred to spend his days seated on the floor playing with toy horses. Philosophers visited him to try to understand what could have caused his strange, dull behavior (no swinging on vines for this one). The fascination has continued up to our time, with a 1974 movie done on his life, The Enigma of Kaspar Hauser by Werner Herzog. 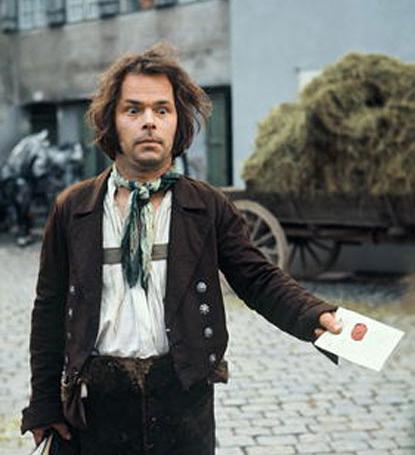 The foundling did manage some speech, developed a love for music, and became a skilled horseman, and eventually the memory returned of his childhood, having been imprisoned in a dark room, fed by a man he never saw. Not a child raised by wolves, but by a predatory human. He was eventually murdered in a public park by a stranger at the age of 22.

Feral children are not all boys. One famous wild child of the eighteenth century was Marie-Angélique Memmie Le Blanc, who was born in 1712 and became known as The Wild Child of Songy. Born into a Native American community and brought from Canada to Marseilla during the bubonic plague epidemic of 1720, the girl survived for ten years walking through the forests of France. 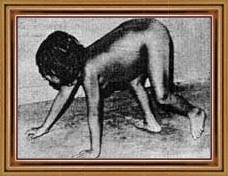 She survived not by living with wolves but by battling them with a club. Captured, she went for ten years without speaking but eventually did take up words. Accounts of her life were widespread – popular pamphlets, books by historians and naturalists all fed the maw of interest in her feral upbrininging.

Of the many more instances of children who managed to survive in the wild, some have been discounted outright. Still, it is fascinating to see the interest that embraces those nurtured by all different sorts of animals. Nineteenth-century men and women devoured tales about the Lobo Girl of the Devil’s River, captured after her wolf sojourn, who managed an escape in 1846 and was last spotted at age 17 in 1852. Earlier, people hungered for tales of an Irish boy brought up by sheep, recorded by Nicaolaes Tulp in 1672. There was the Bear-Girl of Krupina, Slovakia, dating to 1767. The Ostrich Boy, named Hadara, lost in the Sahara by his parents at the age of two and reclaimed ten years later. The Chilean boy raised by pumas. Robert, who lived with vervet monkeys for three years when orphaned during the Ugandan Civil War. A Peruvian boy nurtured by goats. I have even heard of a girl raised by rats.

So nothing in Savage Girl should inspire disbelief, no matter how farfetched it sounds. No, nothing at all.

2 responses to “Wolf Boys and Girls”