What would Blandine Van Couvering have worn?

When I set out to portray The Orphanmaster’s characters, I wanted to make their dress as true to the time as I could. I wanted to clothe Blandine in the garments a practical, middle-class young Dutch woman of the day would wear.

Clothing is decidedly perishable, so we don’t have that many actual articles of dress from long ago to hold in our hands and analyze. But I read what I could. I also pored over the sumptuous paintings of  Franz Hals, Gabriel Metsu, Johannes Vermeer and other artists of Holland’s Golden Century to glean details from their models.

Gabriel Metsu’s The Hunter: note kas in back

After too much of this, I found myself wanting to outfit myself in period clothing, like a historical re-enactor.

We can start by looking at the clothing Blandine removes in her idyll with Drummond, as she undresses herself in the frozen ice-cabin of her youth. Getting dressed for a Dutch woman of the time involved the application of layers upon layers of fabric. Modesty dictated some of these layers, the weather and sheer sartorial delight the rest. Getting undressed required a laborious reverse procedure.

Blandine would have worn stockings, which in her time were really woven socks that pulled up to the thigh to be tied with ribbon or leather strips, or buckled on, either above or below the knee. No elastic back then! (Nor were there zippers. According to shipping records, pins were imported to New Netherland by the barrel. Clothing had to be fastened somehow!)

The ice-cabin scene isn’t the only glimpse of stocking. In The Orphanmaster, Hannie de Laet pulls up her white petticoats to reveal knitted black stockings underneath them.

Next came a chemise, also known as a shift, which fell to just under the knee and was sewn of fine white linen that would feel comfortable against the skin. The chemise served as both a nightgown and a day slip. Most women wore the same chemise continuously until it required washing.

A word about linen, which is fabricated from the fibers of the flax plant and in the seventeenth century represented one of the major products of the Netherlands. In particular, the region around Haarlem (the city in Holland, distinguished from the uptown Manhattan neighborhood by two “a’s”) was famous for the quality of its linen fabric.

Holland cloth-makers prepared the material by first soaking it in buttermilk then laying it out across fields under the bright sun to bleach. Some wealthy Parisians sent their linens to Haarlem to be whitened, believing that the quality of sunlight there had certain qualities that could be found nowhere else. One of my favorite paintings, by Jacob van Ruisdael, shows these Haarlem bleaching grounds with bolts of the cloth laid out. 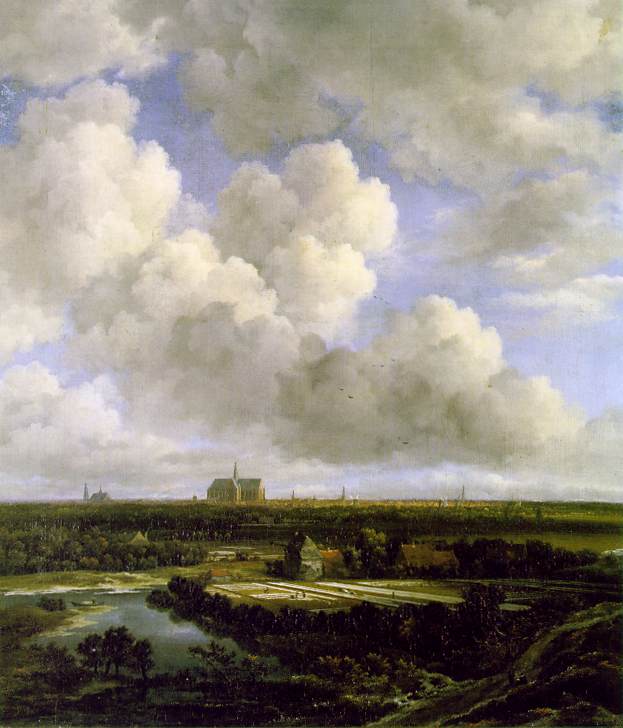 In The Orphanmaster, Blandine trades at Beverwyck for fifteen bolts of bleached Haarlem linen. In the book’s first chapter, she arranges to sell, alongside rum, knives and thimbles, sturdy osnabrig, practical diaper, handsome Hamburgh linen and ultrafine lawn, all different weights and shades of the textile. The fabric was used for everything from gowns and shifts to handkerchiefs to caps. The women at Margaret Tomiessen’s caudle party perform their minute stitches on bright-white linen to be used for the extra-special sheets and tablecloths of a bridal trousseau. These linens would be stored in a kas, a towering closet such as the one Blandine has in her dwelling-place.

Something I was not able to write about in The Orphanmaster: the linen ruff. They are ubiquitous in the canvases of the Dutch masters. For centuries, the ruff had been a staple of dress for well-to-do women and men both. Each one required yards and yards of starched linen and consummate skill to create, but by the time of The Orphanmaster that style had faded. Much more precise in terms of historical period is the soft linen “falling collar” that a horrified Piddy sees in the first scene, its limp ruffles fixed in place beneath the witika mask.

A woman’s stays went on over the linen chemise. Stiffened with whalebone and laced in front, this item ensured support for the bust and gave women the voluptuous figure you see in many Dutch paintings. Was it uncomfortable? Is a corset uncomfortable? A bra? Or Spanx? There is no limit to what women will do to achieve the proper figure, which in 1663 demanded something like an inverted ice cream cone.

We think of petticoats as undergarments, but in Blandine’s time they were a layered and brightly colored sequence of flounces. Hence Blandine’s emerald petticoat that so dazzles a love-struck Drummond.

A gown, the top layer of the outfit, might be worn on top of two or three petticoats; it was a really an overskirt, and would be looped up with ribbons to expose the flash of the petticoat underneath. The gown could be sewn of satin, an especially lustrous kind of silk, or it could be wool, which proved more effectively fireproof if you were a person who frequently tended the hearth.

Clearly visible in the work of  Vermeer, for example, is the glossy, fine satin that makes the women’s dress. I wouldn’t think that Blandine could afford many satin items at her early stage of life and career, but she might have a single garment that she highly values, such as the crimson silk petticoat in the kermis scene.

The Sheen of Satin

The blousy sleeves on Blandine’s costume would have reached just to her elbow. You can see in Dutch paintings the  classic profile of the day: shortish sleeves, a low, broad neckline and a dropped shoulder, which taken together represented popular taste in the mid 1600’s. Women’s shoulders and necks were apparently considered the most alluring elements of their physique.

Off the Shoulder Luxe

A decorative “stomacher” might be pinned to the front of the stays in order to conceal them and make a fashion statement. It made for a long silhouette, with the front of the stomacher reaching in a point down below the abdomen. Or a laced bodice might be worn over the stays, over the chemise. More whalebone! Luckily for bodice wearers, the Dutch had the largest whaling industry in the world at that point in time. 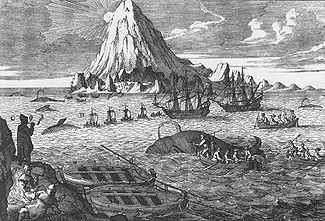 A typical costume for Blandine is what she wears on her trip to Beverwyck: “a cornflower blue dress with a tight bodice, blousy sleeves and a yellow petticoat underneath.”

Leather gloves—often perfumed – were seen as more the province of royalty. For the ordinary citizen, the muff, that warm fur tube with a hand-hole on either end, was considered essential in winter, both for fashion and for warmth.

When Blandine and Drummond stand on the New Bridge over the Canal, comparing notes on the witika murders, it is as if they are competing in some sort of muff contest. Drummond presents Blandine with a small pistol that is specifically designed to be concealed in a pocket within a muff, in her case one of beautiful silver fox. But his muff dwarfs hers in size, a truly macho muff, probably comprised of bear fur. In fact male style of the day tended toward larger muffs than were fashionable for females. Make of that what you will.

In any case, the ampleness and lushness of both their furs is testimony to the booming fur trade in New Netherland, the business that brought so many colonists to America. Blandine herself likely engaged in a lucrative trade with a fellow settler or an indian to acquire her silver fox pelt.

Blandine refuses to wear a cap, but she would have been distinctly in the minority. With infrequent shampooings, a linen cap would be useful in covering dirty hair or lice. Blandine would wear her blonde hair pulled back in a bun, with curls framing her face.

A Bun and Curls

When she goes out (always accompanied by Antony), Blandine wears her warm blue shawl. She keeps it with her always, even when she is holed up above the Red Lion. Women had nothing like a coat, and a shawl or a cape kept them warm.

One specialty outfit that Blandine wears is her scarlet riding dress, a costume that included mannish coats, doublets and hats and had become wildly fashionable at this time. The cross-gender flavor made some uncomfortable. The diarist Samuel Pepys had this comment on women in riding outfits: “Only for a long petticoat dragging under their men’s coats, nobody could take them for women in any point whatever.”

Blandine imports hers from London, easy for her because she trades there, and the ensemble includes a jacket and gown of red wool, a brocade waistcoat and brass buttons, with a mink cape. Drummond professes himself surprised: “Never did someone who wanted to be a man so much embody a woman.”

Men were also more than a little obsessed with fashion in the seventeenth century. Drummond is known for his high-toned costume, his black brocaded doublet and his polished black jackboots. Blandine finds herself falling for him when he appears on the New Bridge in a cobalt cloak and casually unbuckled boots (back then, most shoes had no rights or lefts).

Men at the time were making a transition away from the doublet, a snug, short, padded jacket that had been worn for hundreds of years, to the waistcoat. Legend has it the brightly colored vest evolved at the instigation of King Charles II, thus giving us the modern costume we have arrived at for business dress, the classic three-piece suit of a waist length jacket, waistcoat and trousers.

Charles II also initiated the long, dark, curly periwig that Drummond adopts after he shears off his own hair to disguise himself among the regicides in New Haven. That wigs were both new and highly desirable is evident in Lightning’s intense longing for one.

As for men’s footwear, Louis XIV made fashion history in the mid-seventeenth century when he declared that only those in the royal favor were allowed the privilege of wearing high red heels on their shoes: les talons rouges. They become a coveted indicator of status. 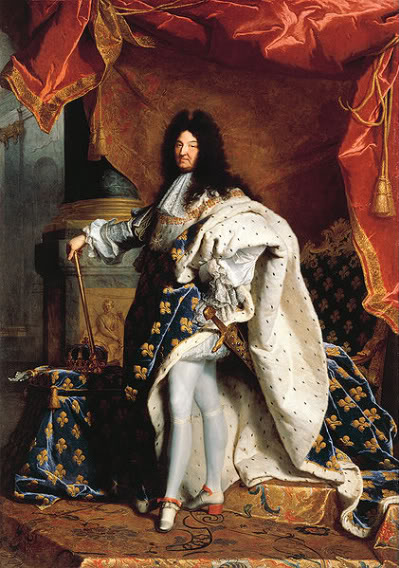 Modern-day French designer Charles Laboutin renders a witty “quote” of les talons rouges with shoes that flash scarlet soles whenever their wearers kick up their heels.

In The Orphanmaster, Martyn Hendrickson, a style setter of the colony, has spent some formative time in France, and his influence seems to have trickled down to les talons rouges of his wealthier peers on New Amsterdam. Martyn frightens Visser one night by appearing in his “extravagant cloak and his broad-brimmed cavalier hat.” As deranged as Martyn is in his mind, in his fashion he proves impeccable.

As ungainly as mid-seventeeth century styles might appear today, it is good to remember a sentiment of Oscar Wilde’s, whom Edward Drummond uncannily paraphrases two centuries before the fact: “Fashion is a form of ugliness so intolerable that we have to alter it every six months.”