The New York Times Book Review: “Sooner or later, a historical crime novel is bound to drag you down some dark alley and into the nastiest, most lawless precincts of the period. Jean Zimmerman followed this tradition in her first novel, The Orphanmaster, a descent into the hellish criminal haunts of 17th-century New Amsterdam. In Savage Girl, this canny author puts all that aside and turns to the Gilded Age for a sweeping narrative, set within the cloistered ranks of high society in 19th-century Manhattan, that raises touchy questions about what it means to be civilized.”

Booklist: “Suffused with a gothic aura of dark suspense, this is a finely wrought psychological work…, rich with historical detail. The mystery stretches from society’s heights to its absolute depths and touches everything between, always increasing in dramatic tension. Zimmerman’s settings spring off the page, from the stinging dust of the American desert to the dank despair of the Tombs prison in New York. Immensely readable, Savage Girl takes the reader by the throat and doesn’t let go.”

Library Journal: “A fanciful and occasionally surreal take on a Gilded Age New York that is reminiscent of Caleb Carr’s The Alienist or even Edgar Allan Poe…For readers who  like their historical novels tinged with darkness.”

The Hollywood Reporter: “True Detective fans lamenting the long wait for season two will be drawn to the creepy Edith Wharton-meets-Stephen King page-turner.”

“A richly detailed 19th-century murder mystery and a fresh gloss on the Pygmalion fable, all in one. The story, narrated by a man who may or may not be a serial killer, compels you to keep turning the pages all the way to its shocking – and satisfying – end.” —Christina Baker Kline, author of Orphan Train

“A provocative and modern take on the historical crime novel, Savage Girl reveals the dark and twisted side of the ‘civilized’ class of the Gilded Age. Filled with fascinating and unexpected details, this absorbing tale will draw you deep into the lives of its engrossing characters as it lures you to its startling end.” —Koethi Zan, author of The Never List

“The best historical fiction brings the reader back to a bygone era and the depth of humanity then. Jean Zimmerman does all that and more in her elegantly written new novel. I simply could not put down this this tale of sweet and painful love, of a savage girl and her encounter with modernity.”—Da Chen, author of My Last Empress

A riveting tale from the author of The Orphanmaster about a wild girl from Nevada who lands in Manhattan’s Gilded Age society. 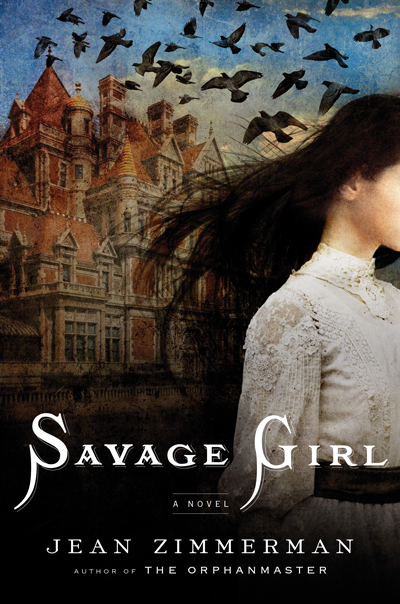 Jean Zimmerman’s new novel tells of the dramatic events that transpire when an alluring, blazingly smart eighteen-year-old girl named Bronwyn, reputedly raised by wolves in the wilds of Nevada, is adopted in 1875 by the Delegates, an outlandishly wealthy Manhattan couple, and taken back East to be civilized and introduced into high society.

Bronwyn hits the highly mannered world of Edith Wharton–era Manhattan like a bomb. A series of suitors, both young and old, find her irresistible, but the willful girl’s illicit lovers begin to turn up murdered.

Zimmerman’s tale is narrated by the Delegate’s son, a Harvard anatomy student. The tormented, self-dramatizing Hugo Delegate speaks from a prison cell where he is prepared to take the fall for his beloved Savage Girl. This narrative—a love story and a mystery with a powerful sense of fable—is his confession.