Children’s Books That Make Us Us

Most of the elegant exhibition vitrines at the New York Public Library’s show The ABC of It: Why Children’s Books Matter stand at a height conducive to adult viewing. And wonderful as the show is, it’s really not a place for children – with the exception of a few nooks along the way offering copies of Goodnight Moon for young ones to handle – but a place for us well above knee height to get sucked back into our literary pasts.

The winding display was chock full of books and objects from the Library’s massive collection, and it ranged over the history of juvenile literature. There were picture books from China. There were vintage, quirky numbers, like The Cries of New-York, detailing children selling “various kinds of cherries” on Manhattan in 1816. 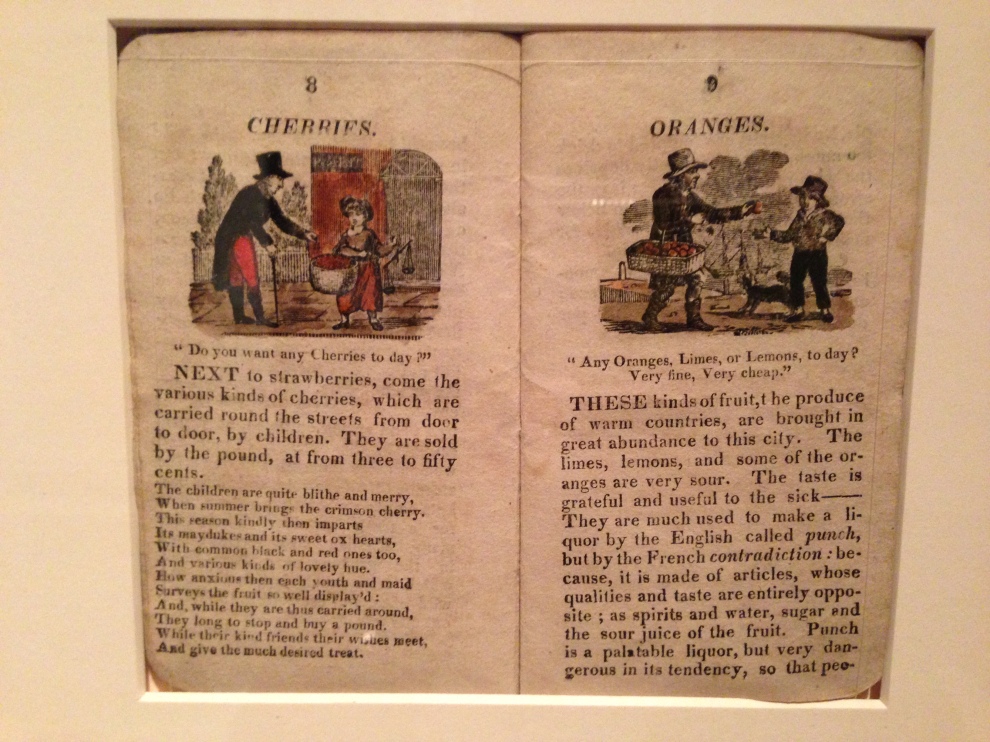 Another book, from 1727, represented the oldest known copy of the most important English-language primer, with an array of four-syllable words, fornication surprisingly found alongside exhortation.

I was interested in Instructions on Needlework and Knitting, from 1847, published in London, whose valuable pages had an actual doll’s dress sewn into the book.

But I found myself gravitating to my tried and true, the darling books of my own important and valuable childhood, when caring people made sure my library was stocked with the perfect pages to make my imagination fly.

All my old favorites were here in some form or another. I saw sketches by Hilary Knight as he worked up to a published Eloise, with the scamp lying on her stomach facing  her turtle Skipperdee or making an island in the “bawth”. The collaboration between Knight and Kay Thompson was “intense, exhilarating,” I learned.

Harriet the Spy, 11-year-old brilliant tomboy, was represented along one wall with a pleasantly tattered copy of the book that could have been my own. That book taught me a lot about what it would take to grow up smart and sly in the world of adults.

The Phantom Tollbooth depicted a land I felt transported to when I was about ten, and going back farther, the Dick and Jane readers drew me in and gave me the creeps simulaneously.

I had forgotten about Ruth Krauss and Maurice Sendak’s A Hole Is to Dig, and the pages on display at the Library touched my heart. 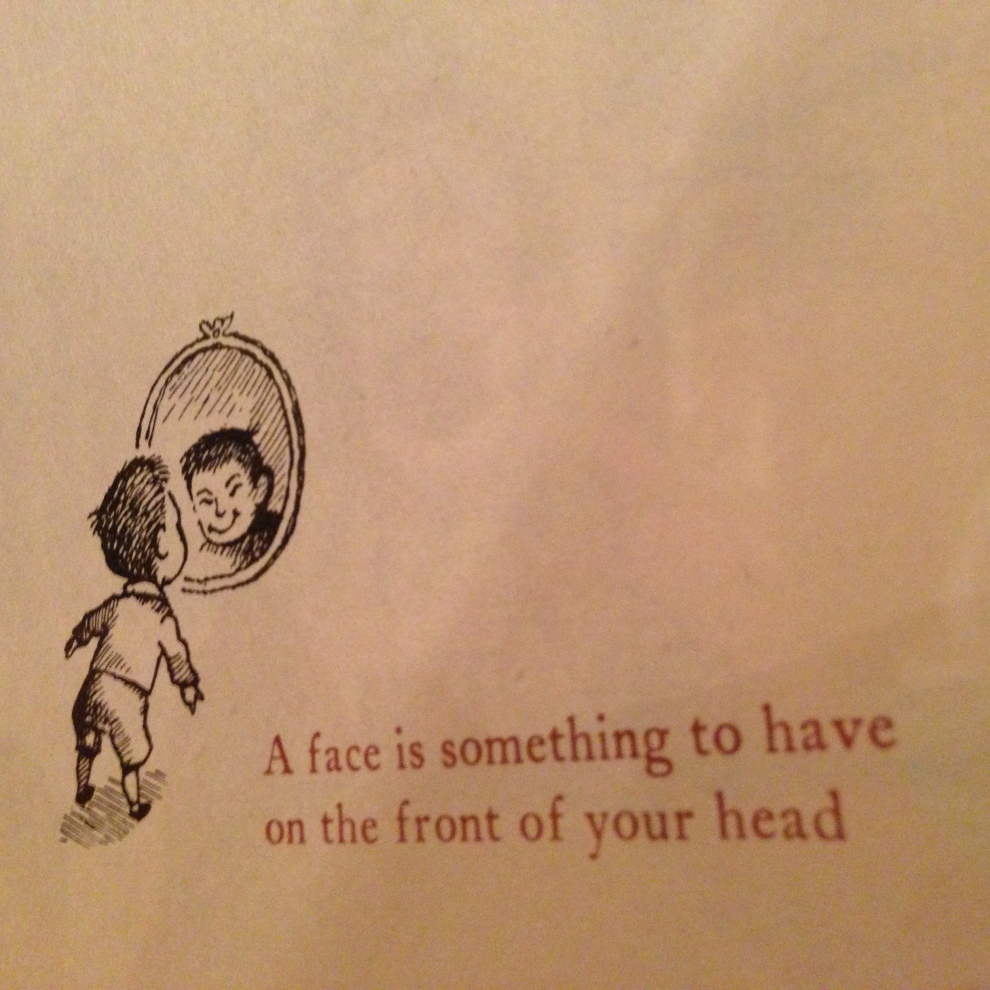 Harold and the Purple Crayon. Timeless. Ferdinand. Charlotte’s Web: “Some pig.” “Terrific.” E.B. White wrote it while reporting on the founding of the U.N. for Harper’s Magazine, and it was no doubt shaped by a concern about who would save the world. The world he created was of course much more real than a big room full of serious old men. 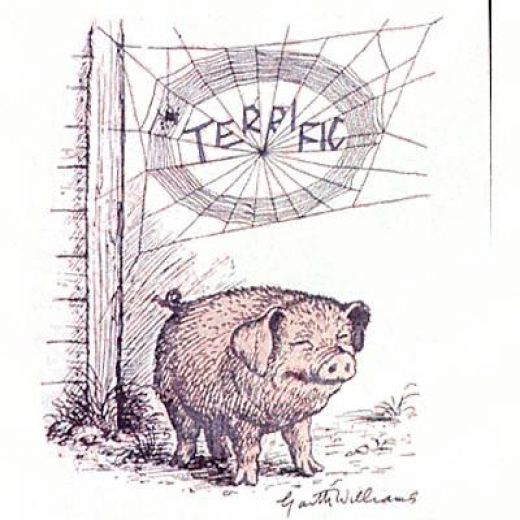 I walked about adrift in nostalgia for my books, my bookcases, my bed where I read my books, my family’s club chair where I slouched with my summer pile from the library. “Libraries raised me,” said Ray Bradbury. I remember poring over tales of the creepy Loch Ness monster and the equally terrifying but also funny abominable snowman. I can  relate to Eudora Welty’s memory:

I read library books as fast as I could go, rushing them home in the basket of my bicycle. From the minute I reached our house, I started to read. Every book I seized on, from “Bunny Brown and His Sister Sue at Camp Rest-a-While” to “Twenty Thousand Leagues Under the Sea,” stood for the devouring wish to read being instantly granted. I knew this was bliss, knew it at the time. Taste isn’t nearly so important; it comes in its own time.

I think that when reading I imagined myself to be Mary Poppins in another life (not the children who were her charges) and so I was fascinated to see P.L. Travers’s very Mary-like green-cloth umbrella with a parrot-head handle, and the Dutch wooden doll that served as the model for the magical nanny, which her American editor gave the library in 1972. “My favorite of all!” exclaimed the mom of two girls, who commenced to sing A Spoonful of Sugar.

I turned the corner and bumped into another historical nugget, the Tweedledum and Tweedledee parasol handle that Lewis Carroll bequeathed upon the former Alice Liddell, now “Mrs. Hargreaves,” in 1891. The original Alice. She held that ivory in her hand.

More heirlooms, including all the original Pooh dolls from the Milne family, which have resided at NYPL since 1987.

I was invited to craft an original story in a Mad Libs vein, with a digital setup on the wall. After I plugged in words, the narration involved a witchy persimmon and an oak turned into a sorrowful seed, reinvented from Hans Christian Anderson’s The Snow Queen. Anderson said, “Life itself is the most wonderful fairy tale.” All fun, but where are the fairy tales? Where are MY fairy tales? The ones I read and reread until the paper book jackets tore.

Oh, there, finally. The Blue Fairy Book. A first edition of the Andrew Lang collection, which had something like a dozen volumes.

Mom, Dad, Grandma—and I think it might have been Grandma—thank you for giving me The Blue Fairy Book, the Red, the Green, and the others, volumes I would crack open to release their dreams, their mystery and passion. Beauty and the Beast, which I read in The Blue Fairy Book, still gives me a shiver.

3 responses to “Children’s Books That Make Us Us”