Bluebirds Dancing in the Rain

I always wondered about the Danish Home. I’d passed the faded sign on Cedar Lane a hundred times, and never followed it down. 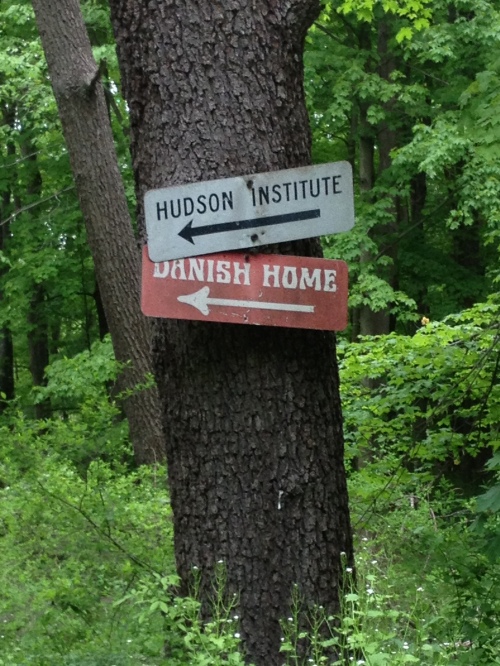 I always pictured Keebler elves performing pirouhettes atop a barrel in the woods.

Saturday I had a chance to check it out, because the troupe of Morris Dancers known as the Bouwerie Boys were set to perform at the site. It was, of course, a home for seniors. Nonresidents were welcome.

A light drizzle from the still-cool sky only enhanced the lush perfection of the setting. May flowers.

An imposing building of dark stone. A castle.

Maud and I learned about the Danish Home. Founded in Brooklyn in 1906 for those of Scandinavian descent, it moved in 1954 to Croton-on-Hudson, New York. Eighteen or so seniors inhabit the former stable–the castle–built by financier JM Kaplan earlier in the century as part of a 40-acre estate. It felt like a different country.

A harbinger of good fortune greeted us when we stepped across the wet grass behind the building while waiting for the dancers to arrive. Atop a cockeyed birdhouse tethered to a hydrant sat a bluebird.

Well–with a flash of sapphire and a touch of rust it fluttered away, not allowing a picture. Thank goodness it didn’t fly up my nose. We learned from Eric Anderson, who runs the place, that bluebirds and barn swallows squabble over the dozen birdhouses on the property, each camp currently claiming half.

Morris dancing also is supposed to bring prosperity, fertility and good luck after the long winter. Each village of the Cotswolds, in England, where the tradition originates, has its own style and costume, and all the moves are passed down from father to son.

No elves, but something elfin about these husky grown men and their skips and hops, their bells and ribbons and flashes of “whites.”

The Bouwerie Boys dance all over the New York area (you can find their schedule on Facebook) and a little drizzle seemed to bother them not a whit.

Nor did it trouble the elderly ladies in attendance, though umbrellas were in short supply. One kept up a steady gab throughout the performance. “I want to know what this is all about!” she said at one point and, later, with authority, “Goes back to Shakespeare’s day.” Which was not, in point of fact, correct. The year 1452 was the earliest recorded show of Morris dancing, so by Shakespeare’s day the steps were ancient. 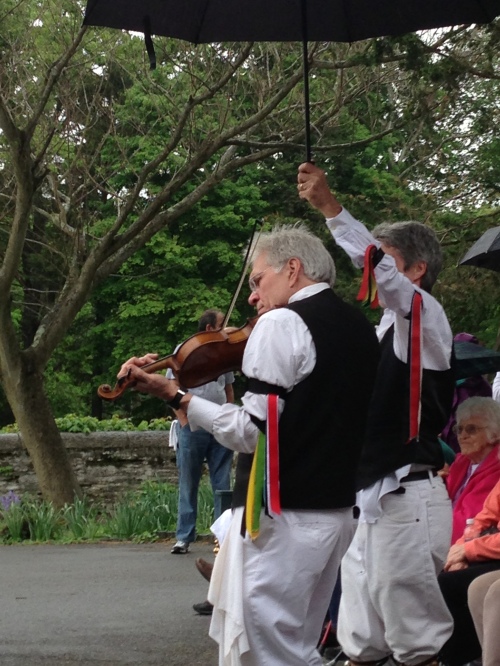 The fiddle player in his “reel” life is the violist for the Manhattan String Quartet. By the end of the performance he’d popped a string.

Then the dancers sang a jolly tune: I like to hear those small birds singing early in the morning – hurrah for the life of a country boy.

Finally, shots of a clear liquid were passed among the dancers. Well earned, after valiant leaps in the light, ancient rain.

9 responses to “Bluebirds Dancing in the Rain”