Thug politely pledged to test out my biscuit recipe when I contacted him/her/them, that is as soon as the dust settled. (His actual words:  I love biscuits and will try your shit out.) Thug Kitchen has after all experienced a viral explosion since the novel cooking site launched in October. Critics call it profane, and profane blended with strawberries and avocados seems to produce a bit of gastric discomfort. Is this some kind of trick? Are we being had?

I call the combination real.

What is it with men and cooking? Top chefs are almost uniformly male. Backyard barbeque-meisters, natch. Boys learn from their fathers.

But those who are not chefs of reality TV or summer parties, the men who man the stove day in, day out, making family meals, making solitary meals, prepping the onions and boiling the rice – still sadly a minority. Even Brooklyn foodies cook less than their wives. 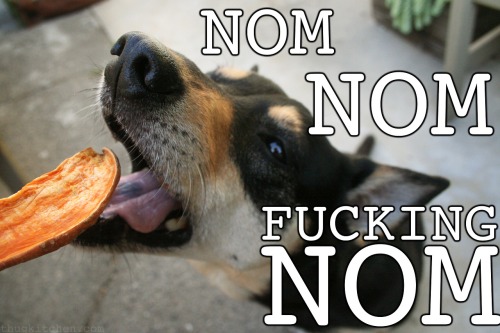 The press will tell you different, that hordes of men are cooking now. After all, the men of the fourth estate are different, and they write what they know. Men have of course increased their kitchen activity since, say, the 50s and 60s, since women gave them a shove with the spatula and said, Do it. Make me proud in here. A wee bit. (And truth be told, younger men are stepping up. A 25-year study of Gen Xers found that men were making two-thirds of the meals married women were. Not too shabby.)

Both my brothers have achieved local fame over the years for their culinary expertise. I still remember the roast goose Andy put on the Christmas table a couple of years back, crisp and done to perfection, but he also puts his kindergartener’s dinner on family table every day. Peter assembles a crazy raw kale salad. Don’t know where they got the gene, as the sum total of our father’s skill is a perfect hard-cooked egg.

Thug Kitchen unites macho and grilled-romaine-with-a-touch-of-seasalt as easily as a stroll in some vegan park. Saveur called it the number one food blog around. 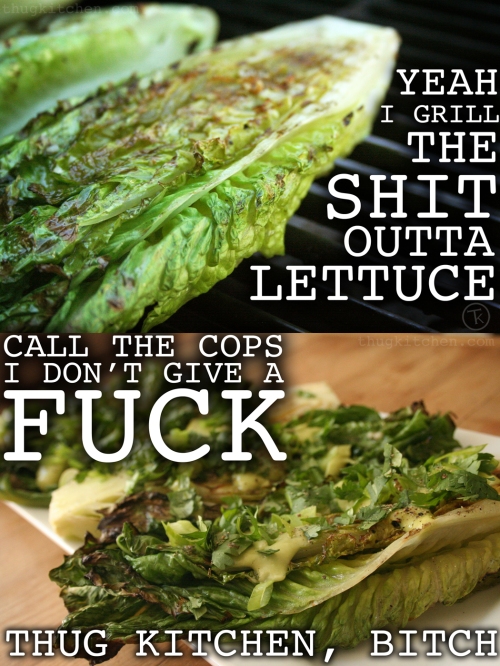 “ANYBODY CAN GRILL A FUCKING BURGER OR HOTDOG. Elevate your grilling game with something that simpleminded motherfuckers wouldn’t even consider. Grilling veggies is some classy shit and it only takes a few minutes. I am not talking about some played out portabella burger that tastes like a dirty sponge. Eggplant, artichokes, okra, lettuce: all that shit can be thrown on the grill and are in peak form during the spring and summer. People are guaranteed to come correct next time you invite them over. Raise the fucking bar and grill to impress.”

It doesn’t need to be Oscar Mayer any more.

Thug actually is vegan, if you scroll down the site to take a better look, past the blast of biting admonitory locution. No fathers in man-aprons grilling steaks here. Instead, dishes a lady would love: lavender lemonade: “Calm Your Bitch Ass down like a Boss-Drink Some Fucking Flowers” runs the heading, and the recipe advises, “This is some good shit to make when you are feeling bougie as fuck.” Roasted strawberry and coconut salad inspires this heading: “Eat a Goddamn Salad. Fuck it-Eat Ten Then Brag about it.” But TK told the NY Daily News, “You don’t have to be fancy to give a f— about what you eat.”

Thug appears to be a collective. I got a note framed in the royal we. (They’re going out with a book, as soon as they get a proposal together. A book we ladies can share with the gentlemen in our lives.) If so, they must be having a blast, sucking down their strawberry-grapefruit margaritas and talking trash.

Can I come out to L.A. for dinner? I clean up nice and I bet you do too.

2 medium grapefruits or 1 big son of a bitch

juice of 1 lime (about 2 tablespoons)

Take the pit out of the avocados and scoop out all the green flesh into a large bowl. Mash it up with fork. I like my guacamole chunky but do what you gotta do. Cut the grapefruit up into segments like you would cut an orange. Remove the peel and cut the segments into pieces about the size of a nickel. Put all the grapefruit into the bowl with the avocado. Add the cilantro, red onion, lime juice, and salt and mix it all up. Taste it and add more shit until you like it. Serve immediately or chill it for a bit. I’m not gonna tell you how to eat guacamole, just follow your fucking heart.