I’m learning what boredom means, and learning from boredom.

My assignment this week was to look after some trees at a Con Ed site where a new gas line is being installed.

Six trees stood along the south side of East 10th Street, their trunks rising from tree pits all along the sidewalk, spanning the length of the trench the pipes were going in. What do we have? Pyrus, pyrus, gleditsia, pyrus, pyrus, ginkgo. It has a nice, leafy ring to it: pear, pear, honeylocust, pear, pear, ginkgo. Another arborist was present when the trench was initially dug to ensure the health of all the visible roots. I was on call now because NYC requires that an arborist be present on construction sites whenever there is work being done around trees. Isn’t New York munificent? Trees won’t die on the city’s watch.

So here I was. And as Con Ed filled the trench, there was little for me to do. I would pop over and check the roots to the tree side of the trench once in a while. The roots are still intact. Proceed, good men, proceed.

Once, some time ago, I was playing canasta with friends and my husband. One of us – it was probably me – embarked on a longwinded description of the plot of an independent movie. One of my friends interrupted, saying, “I’m already bored!” The line still has me laughing.

At the site I’m already bored at 8:00 in the morning, when I step out of my car, even before I stick the orange and white cone on the hood and pray that the traffic cops give me a break in my no-parking parking spot. Here is what I see: men pouring sand into a three-foot-deep cut along the sidewalk, cones along the length of the site, a few trucks, a yellow backhoe, a tamping machine that vibrates with a noise like a helicopter, a machine for cutting pavement, a mound of red gravel to go atop the tan sandbox sand, the crimson flags of the flag men. And a crew that works incredibly hard as I stand there, a clipboard-carrying inspector.

Random literary fragments float through my head. Baudelaire supposedly sold his soul to the devil in exchange for never being bored. Samuel Johnson: If you’re bored of London, you’re bored of life. John Berryman wrote

Life, friends, is boring. We must not say so.
After all, the sky flashes, the great sea yearns,
we ourselves flash and yearn,
and moreover my mother told me as a boy
(repeatingly) ‘Ever to confess you’re bored
means you have no
Inner Resources.’

I shift my feet. Look up. The pears are coming into bloom.

My mind drifts to the most famous pear tree in New York history, the one planted on Third Avenue and 13th Street by Peter Stuyvesant on his colonial bouwerie, the verdant farm that lay far uptown from the Manhattan city center at the foot of the island. ‘Tis said he was nostalgic for his homeland, and an imported Dutch pear sapling gave the aging ex-New Netherland director the succor he needed in his retirement. The tree survived 200 years as the city grew up around it, bearing fruit until its last season, after which a wayward horse-drawn wagon struck and killed it. This was 1867. 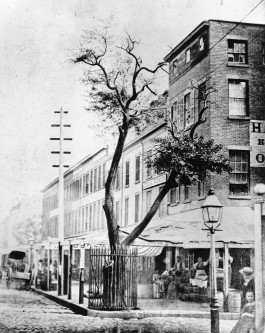 The people of New York City mourned, and the stump was preserved for many years – the New-York Historical Society has a fragment in its collection. Now there’s a plaque on the building. That a tree could inspire such devotion is remarkable. I can’t help but think about some of the people I come across on the streets of Brooklyn or Queens, who run up to me asking breathlessly if the city intends to take down their tree – hoping to see it gone! 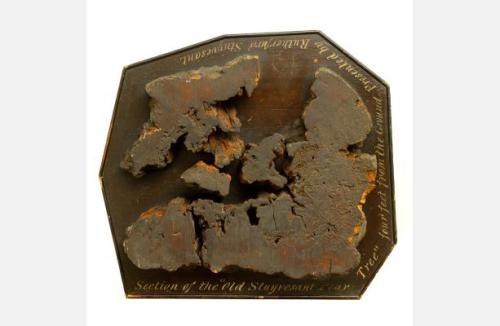 A man of Stuyvesant’s stature with a big old country estate probably had many a grove of fruit trees. By chance, this was the only one that survived. Still, this dray-destroyed pear tree became the iconic tree of the city, of which the scraggly specimens on 10th street are but poor simulacrums.

I have one job here, really, on 10th Street, when it comes right down to it. In the trench beside the ginkgo, a root six inches in circumference protrudes from the tree side, stretching to the other side.Who knows where that muscular, healthy root winds up. It might head down to the bowels of Manhattan or crack someone’s cellar wall. In any case it is bringing in nutrients that allow the ginkgo to survive. Here I am, not a trench digger or a trench filler or a pipe fitter, but the sole saviour of this root. I have to convey to the men working how vital it is that in their efforts to fill the trench they don’t harm this essential piece of the tree in any way. I point at it, explain, plead . At one point I actually see a guy vault over the root, landing on it with his workboots. No, no, no!