I’ve tried to wean myself from portents, omens, tricks of the light.

Colors that pop have always seemed to be telling me something, like these asters I saw recently at a botanical garden. I took a deep breath, feeling good things were coming my way. 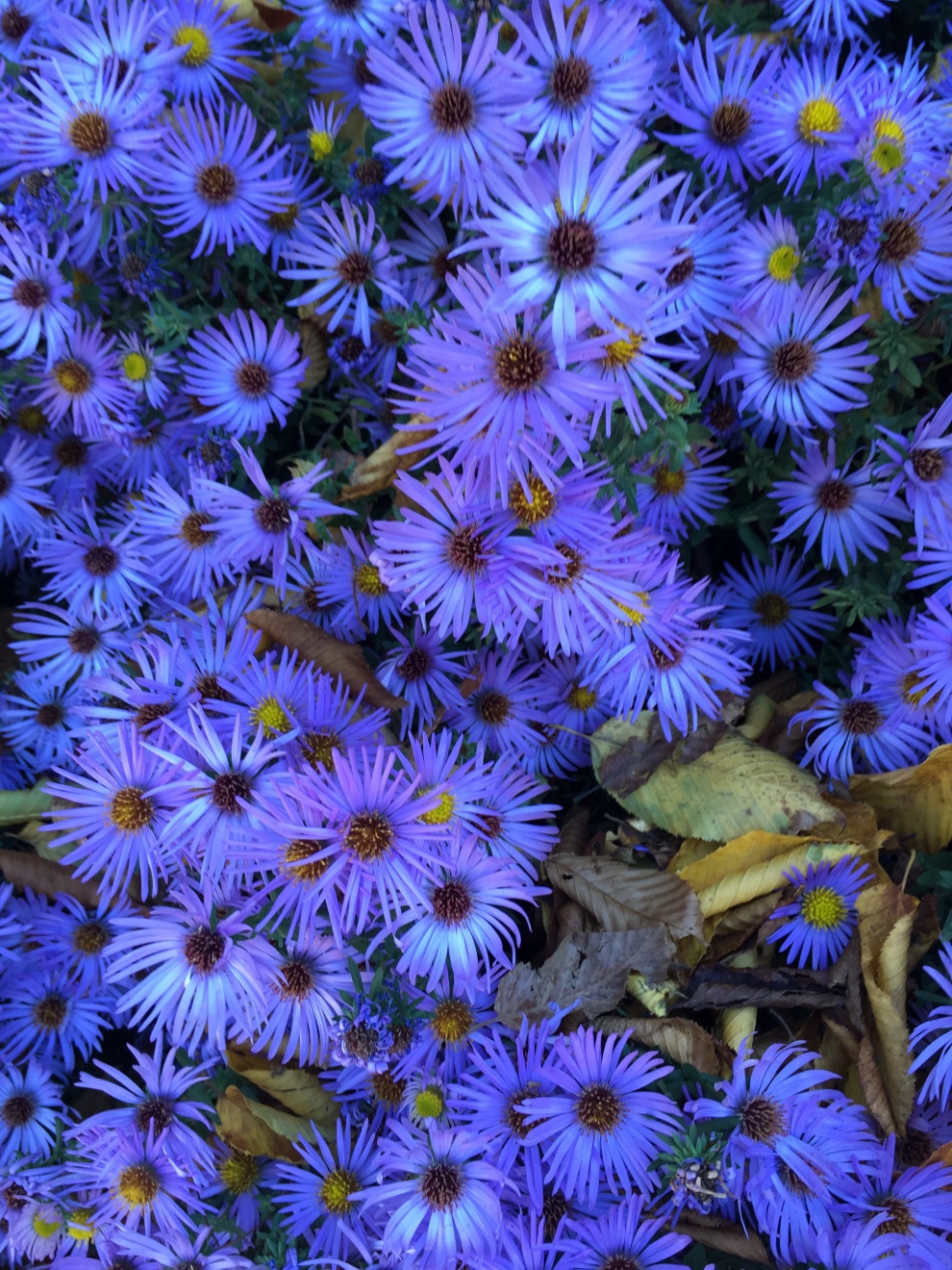 Today I was on the southern shore of Staten Island, supervising tree planting in a New York City park, and everything seemed loaded with meaning. It wasn’t a cheery day, per se. The skies hung dark and grey. This body of water was Arthur Kill, off of the town of Tottenville; the view across was to Perth Amboy, probably not the most swellegant spot in the world. I was chilled beneath my fleece. Still, the sweep of the coast was ravishing.

Colors popped. The detritus on the beach seemed hallucinatory.

So did the incredibly complex needle structure of the Pitch Pines (Pinus rigida) we were planting, along with sweetly bushy Junipers.

A perfect little lighthouse floated in front of me. Fishing boats. Buoys. All around brambles, the vivid red of rusty blood. The near-black loam – until recently a dump filled with lovely things like burned cars – was thick with enormous weathered oyster shells. They spoke to me of good things in the past, Indian oyster feasts on the shores here, and in the future, oysters on the half shell that I would consume on ceremonial occasions. The air itself grew more briny, more aromatic, as the day went on.

I’ve always been able to say a) this wonderful thing is happening, therefore b) this wonderful thing will happen. The trouble with that is there is no actual causal relationship between felicities. Life throws things up like a packet of sparkling pins and they don’t always land back in the pincushion.

But today. We were erecting a small forest, perfect in every way. It could have been painted, a brilliant illustration.

One of the crew was leveling an American Sycamore in its pit. The tree held onto one leaf at its very top like a Christmas star.

The planter, Robert, was like a cheerful Bluto, with a pierced eyebrow, an extravagant beard and those tribal lobe-stretching earrings that it was a little surprising to see on a landscaping guy. The tree was straight as a yardstick at the bottom, but leaned south with its upper limbs.

“I hope that rights itself.” I said.

“It’s like in life,” said Robert, smiling. “Everything gets better.”

The crew told me a humpbacked whale had visited just off shore a week ago, chasing baitfish. I wished I had seen it. Maybe I could come back. Now that’s a sight that would pop.