What exactly was the Victorian bustle, and why did it become a fashion staple? 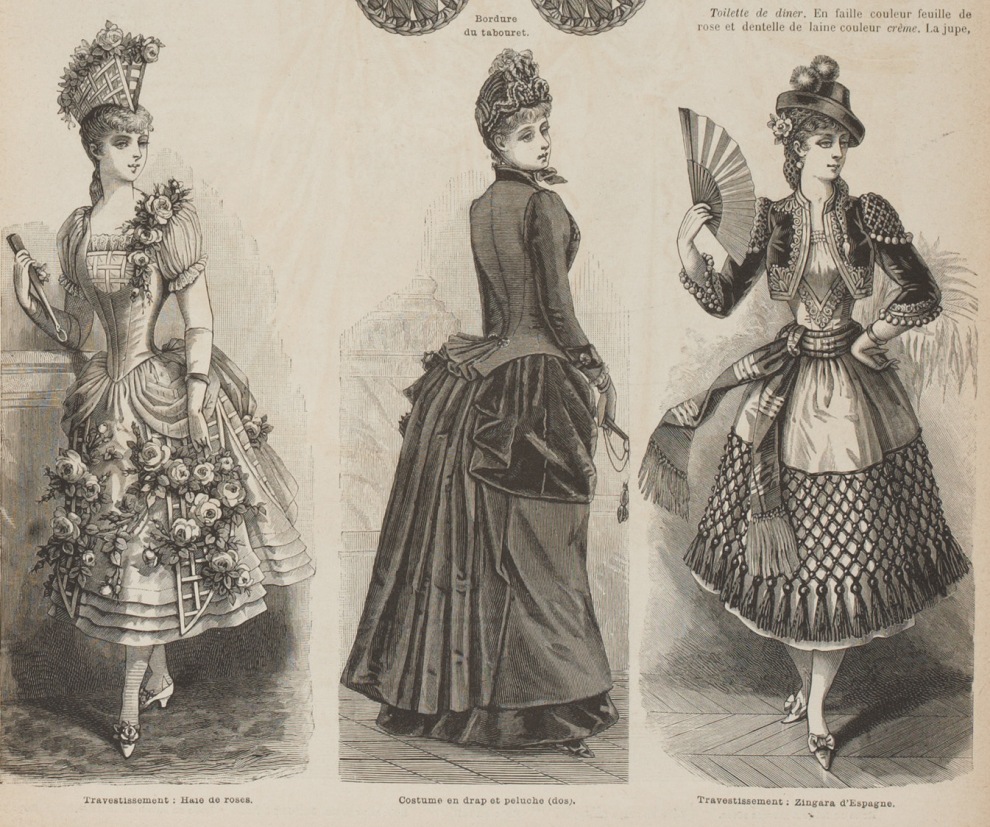 In Savage Girl, the main character follows a trajectory of fashion changes, from a threadbare shift to simple girlish day dresses to glamorous evening wear, including what is generally thought to be the ball gown of the century. She is not limited by a budget, so she can indulge in the most spectacular attire available, with outfits like the fashion plates that follow. When I wrote about Savage Girl, these inspired me. 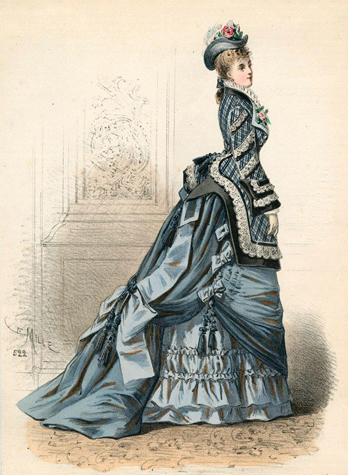 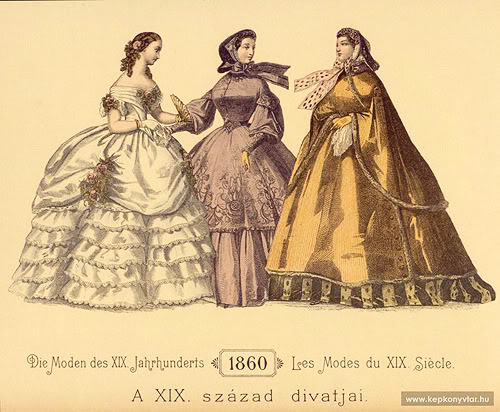 All of these materialized out of  earlier attempts to widen the bell of the skirt. Panniers, for example. Made of linen and baleen, they sat at the waist and held suspended tapes of cane, metal or whalebone that gave the dress an exaggerated shape. 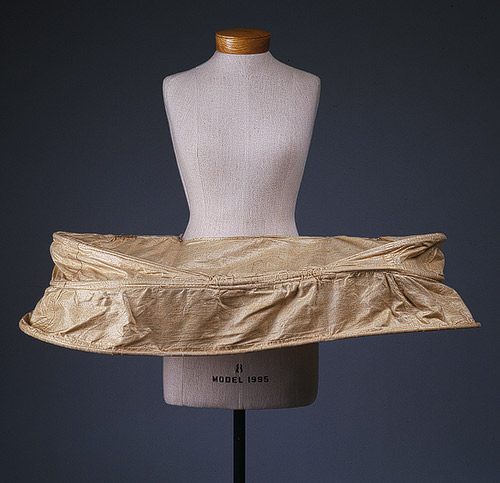 A set of panniers was also handy if you needed to rest your tea cup for a second to blow your nose. 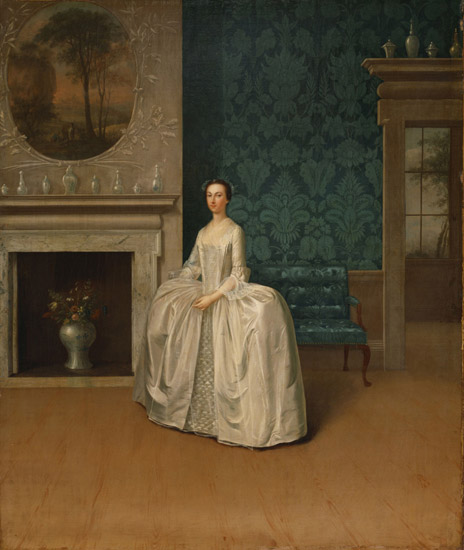 Panniers grew trendy in the middle of the 18th century. It was said that people had to have the doorframes in their houses enlarged so that women could make their way from room to room.

There were many flouncy permutations of the skirt between the mid-18th and mid-19th centuries, most having to do with how many layers of petticoats you could afford – or manage to carry as you made your ladylike way along. 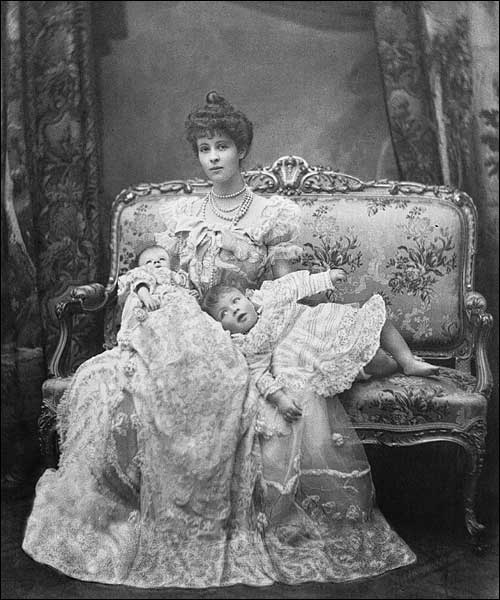 With a bustle, a contraption of horsehair and metal did the heavy lifting. The bodice would be delicate and would end at the close-fitted waist. The voluminous fabric of the skirt might be pulled up in back with a large decorative bow. Eventually the bodice extended down in the form-fitting style known as the cuirasse. 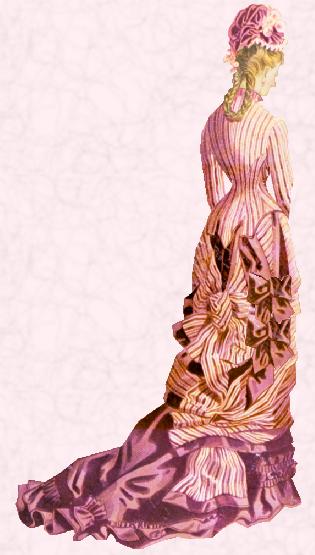 Another variant, the polonaise, cascaded down the back in ruffles, 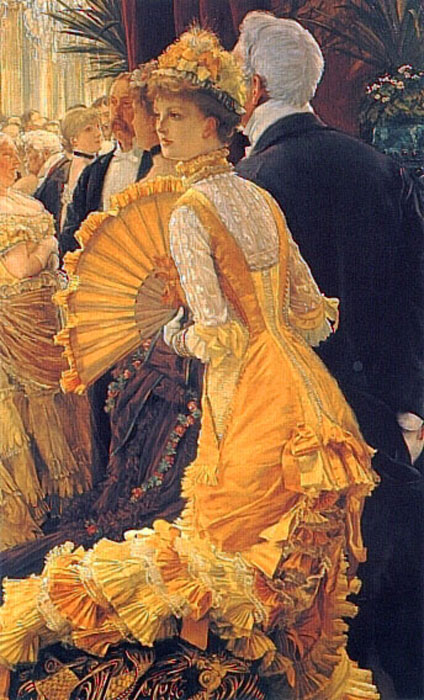 Trimmings were crucial, the gaudier the better. Nineteenth century men made fortunes off of selling ribbons. 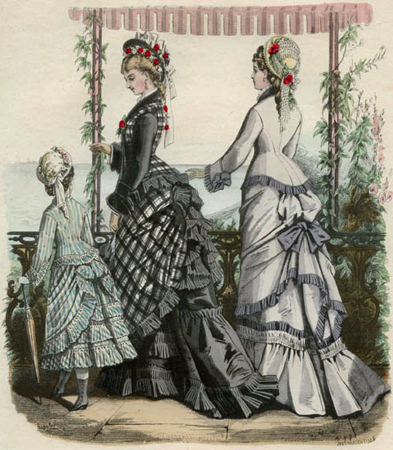 A lot of these decorations were arranged on a horizontal axis. Petticoats helped lift the train off the muck of New York streets. Imagine threading your way across a busy avenue filled ankle deep in horse manure.

But why, why the bustle? Where did it come from, this emphasis on a ladylike woman’s posterior?

One phenomenon not long before the bustle’s popularity that I find interesting is that of the Hottentot Venus, a South African slave named Saartjie Baartman who was taken from her home and displayed at London and Paris freak shows from 1810 to 1815. 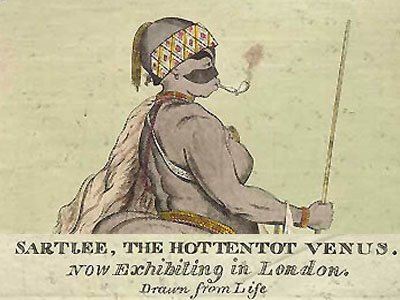 People were wild for her, paying two shillings apiece to gaze upon her steatopygian form in wonder. Wild, she was called, savage. Hers was a tragic story; five years after her arrival in Europe, she died. 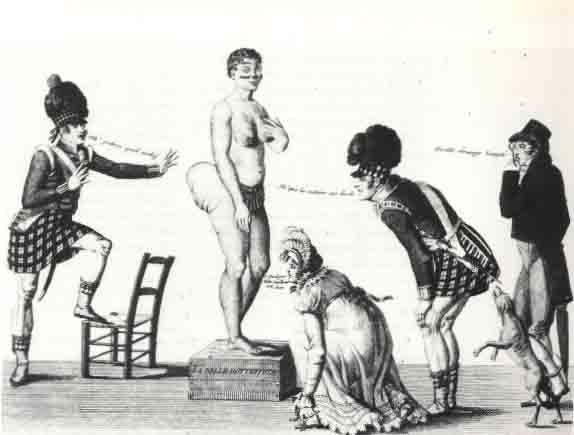 But it wasn’t long after her whirlwind tour that the bustle came in a la mode for decidedly un-Hottentot ladies.

The accentuation of the inherently rounded female form goes back many centuries. Consider these upper paleolithic carvings. 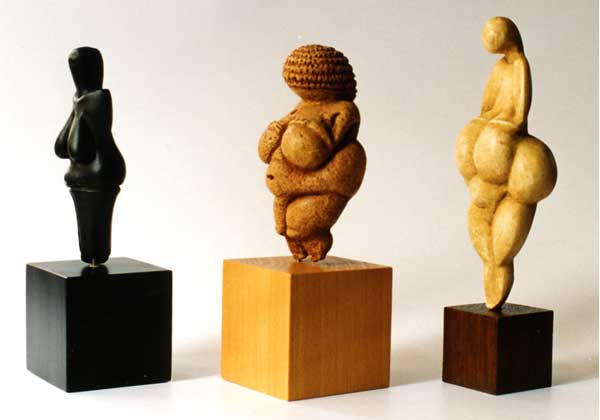 In the Cyclades, a group of thirty small islands that encircle the sacred island of Delos in the southwestern Aegean figurines survive that show a similar profile. 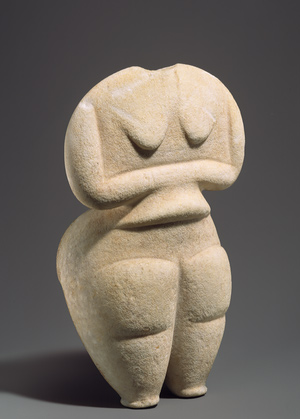 I am sure the female models upon whom these marble figurines were based never saw a dress of any kind, let alone a crinoline or a ball gown.

But look at the simplest Cycladic sculpture and tell me you can’t imagine it a Victorian dressmaker’s dummy. It wouldn’t even need a horsehair bustle.