An Evening of Stand-Up Tragedy

The art of complaint never sounded so un-peevish. Almost noble, actually. We went to hear Tony Drazan perform his variety of standup, a part scripted, part improvised monologue, at Nuyorican Poets Café on East 3rd Street. Known for its poetry slams, the institution has been there since buying the rundown building for $10,000 multiple decades ago. It can accommodate all kinds of talents, and Tony is one of them. No matter that it was the coldest night yet this fall – that wouldn’t hold back New Yorkers. A motorcycle roared past us down Avenue B, and a guy walked by with a surfboard perched on his shoulder. Comedy should be easy. Or would this be comedy? Time would tell.

We started out at a ramen joint around the corner, Minca, on East 5th Street. A waitress named Kyoko in a Hello Kitty sweatshirt served us steaming bowls of pork broth with all the fixings. 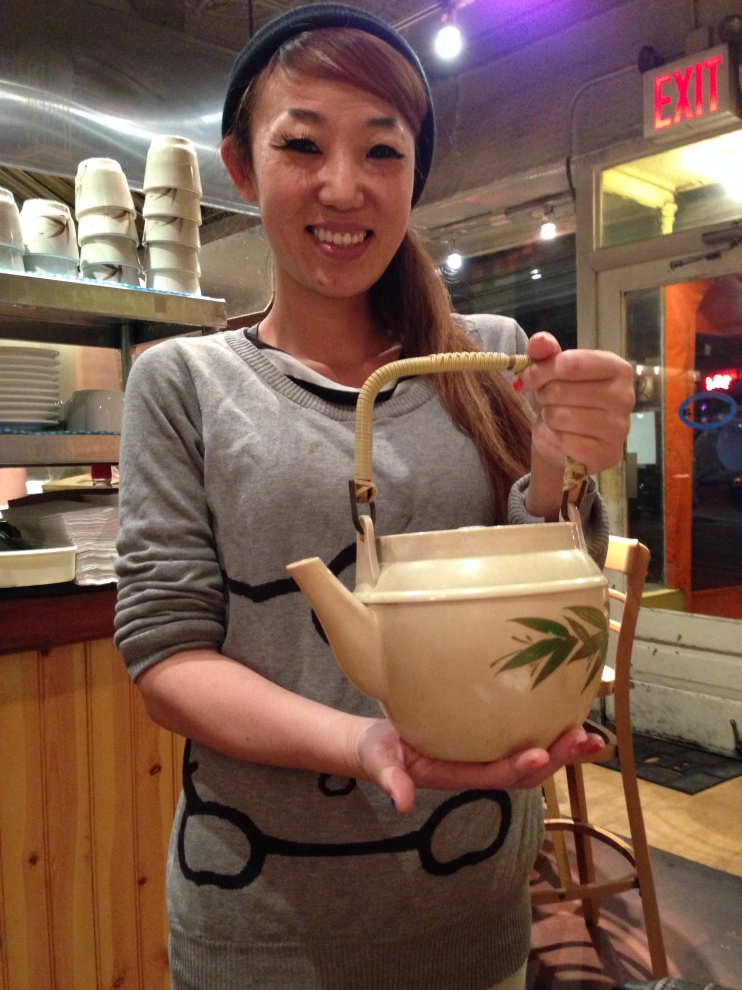 What makes me happy in this world? A bowl of soup with charshu. Slow-roasted pork, to you. I am a hungry simpleton when confronted with ramen, and I also like hot plain tea.

Tony sat down for a pre-show cup and laid out some of his strategy for these stand-up routines. He performs once a month. It’s not his “real” job, he’s a screenwriter and film director with lots of credits. He’s a hockey dad, with a nine-year-old son, Leo.

He told us some of the things that had happened at past gigs.

“I used to stop and apologize and say I don’t know what I’m doing here. It would relax me.”

Around us, the young men have van dyke beards and deep black eyes, the girls have long black hair, and it looks as though everyone’s related. Above us on the wall, some intriguing artwork. We’re looked down upon by kings.

At Nuyorican Café, people started showing up. A cognitive scientist named Amol Sarba fixed a black contraption called a halo around Tony’s head. Its low-level electrical charge is supposed to boost brain function, and the process recently had a write up in The New York Times. Sarba told us he himself wasn’t convinced until he tried a video game he’d never played before after wearing the device and “absolutely crushed it.” Tony got interested when he heard that traffic controllers and jet jocks were trying out the device. “Don’t let this discourage you,” he offered to audience members as they settled themselves.

Bare bones, this was, ancient brick and a graphite-colored curtain, with a mike stand in the center of a faded oval rug. That was the space. Two dozen people trickled in, some all the way from L.A. Many of them knew the performer. It was intimate. You could almost forget Tony was  wearing jumper cables.

He commenced. Talking about good intentions gone bad. He wandered. Circled around to the point. To another point. “This is about survivor envy,” he said. Not survivor guilt. A friend, a music composer, got sick with cancer, fell into a coma from November to March. Woke! Rapidly regained his strength. And as strange as it sounds, “I was envious that my friend had survived brain cancer.” 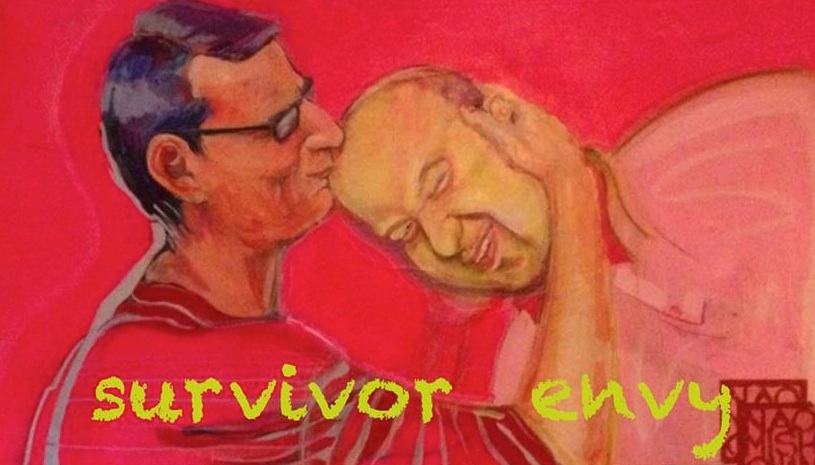 Sarba stepped up to remove the headgear. “I’m trying to be more game in my life,” Tony deadpanned. Lenny Bruce was brave, but Lenny Bruce never wore a rig like that on his head during a performance.

More meandering. Probing. Tony’s father, before he died, “had primary progressive aphasia – he couldn’t find the word. It wasn’t Alzheimer’s – he could always recognize me as his asshole eldest son up until the end.” Back to the recovered friend: “He woke up and started pulling out the tubes. He felt renewal in his life and that’s when I began to feel jealous. Somehow he was the better for it. He came out stronger than me.”

In the audience, there was a shift. I was thinking of a phenomenon from a number of years back called the Apology Line, open for business 24-7, which allowed callers to leave a message in which they detailed all they were sorry for. You could also call and listen to other peoples’ woes.

Tony spoke, a stand-up, sit-down tragedian, about having always believed that bad experiences shape you. He lost his mother when he was ten, he said, and that loss always gave him the sense  that “any special achievement I had was because I had survived her death, was honoring her death.” He picked up women by confessing his tragedy.

“Does this make any sense?” he asked us. The anecdotes twined around, curled, unfurled, from Long Island to Beverly Hills to Manhattan. Dark. Funny. To now, when he admitted to feeling paralysis and sadness even as he was performing. He stood, moved the chairs around from place to place, sat in one, sat in another one. He picked up an enormous piece of paper with scribbled notes, folded and refolded it and consulted it now and then – part performance, part origami. Told us about a Barney’s Warehouse Sale in Santa Monica where he had his first of many panic attacks. The thread… it was so loose, so elastic, but might it not break? The audience roots for the performer to tell his story as he needs to tell it.

Looking for answers, he visited a sikh internist, a cardio guy, a homeopath, an autoimmune specialist. Most recently came Tai Chi, the horse stance, internal energy training. More loss. More venting. Not everyone can make a complaint emerge this fresh. Make it not just a run of the mill kvetch. And, at the end, something new:

“We’re all vulnerable. It occurred to me that my old way of being was misplaced. I didn’t need to be a champion for any of it.”

Silence. In the end there was only the sound the heat made in the metal ducts.

2 responses to “An Evening of Stand-Up Tragedy”