The Metropolitan Museum on a Saturday afternoon in fall: everything seems very still, but perhaps that’s because I am moving fast, whisked along in a wheelchair to save my aching foot, the cool gallery breeze in my face, going to see a show I’ve been hungering to experience. On the way we pass the spectacle of so many different works, in diverse media, all amounting to a taste-whetter for what is to come. First, in the great hall, the five monumental displays of flowers on all sides, hydrangeas something of a blur as we roll past. The arrangements, fresh weekly, have been bankrolled since1969 by a fund established by Reader’s Digest co-founder Lila Acheson Wallace, and each one is more fabulous than the last. 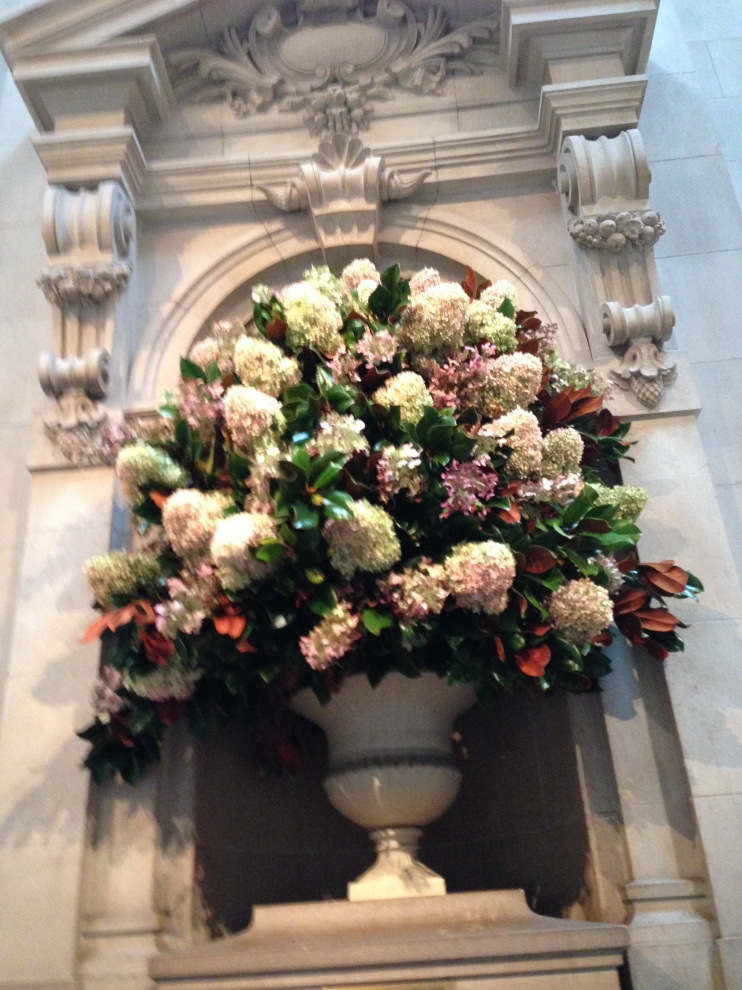 We zoom past Lorenzo Lotto’s Cupid and Virgin, the somewhat silly canvas from the 1520s that shows the mischievous creature urinating on Venus, a symbol of fertility. 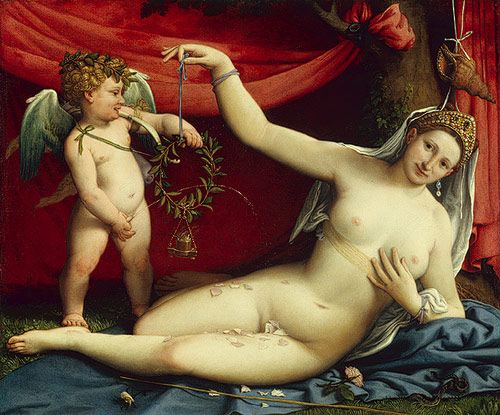 Another Virgin, one that came to the museum with a thirteen-million-dollar price tag, is shown in the Madonna and Child painted by Duccio di Buonisegna in the fourteenth century.

We whiz by the effigy of one Elizabeth Duvenick, sculpted by her husband, Frank Duvenick – Henry James called him “the unsuspected genius” — dripping with gold leaf, in the courtyard at the front of the American Wing.

“A zombie,” says a young boy passing by. Good point. Then we’re off through the hall of Rodins – a sculptor I recall loving as a teenager, then thinking was impossibly tacky, though now I’ve come around again.

Blink as you ride along and you’ll miss the medieval bronze baptismal font held aloft by kneeling pilgrims.

And through it all there is the sense that Zorn is here, someplace. John Zorn, that is, mister avant composer and saxophonist, whose work is being celebrated at the Met in over a dozen performances today throughout the galleries in honor of the musician’s 60th.

We can’t squeeze into the one performance of the man himself, so we are forlorn, Zorn-less, but over the heads of a crowd as we make our way along we hear the noise of string instruments breathing.

There should be a special genre of art in New York City called Over-People’s-Heads.

The Metropolitan tears you in all directions, in a happy way, a way that jazzes up your senses and makes your mind feel more alive. The show we are here to see, Interwoven Globe: The Worldwide Textile Trade, 1500-1800, does the same thing in a more focused way. Now, I have to say from the start that although this exhibit has been touted as the Met’s blockbuster of the season, I wasn’t expecting to have to fight my way through the crowds to get at the items being displayed. And I was correct. This is a haven principally for textile lovers, and there is plenty of space to stretch your limbs and be dazzled by the bed covers and kimonos on display. This is not an Over-People’s-Heads show.

Did someone say bed covers? This coverlet, called a colcha, originated in India for the Portugese market in the early seventeenth century. It was embroidered of yellow tussah silk, also called wild silk, on a cotton background, showing images that included a hunt, the adventures of Hercules, the Judgment of Solomon and Phaeton driving his chariot too close to the sun. Among many other things. 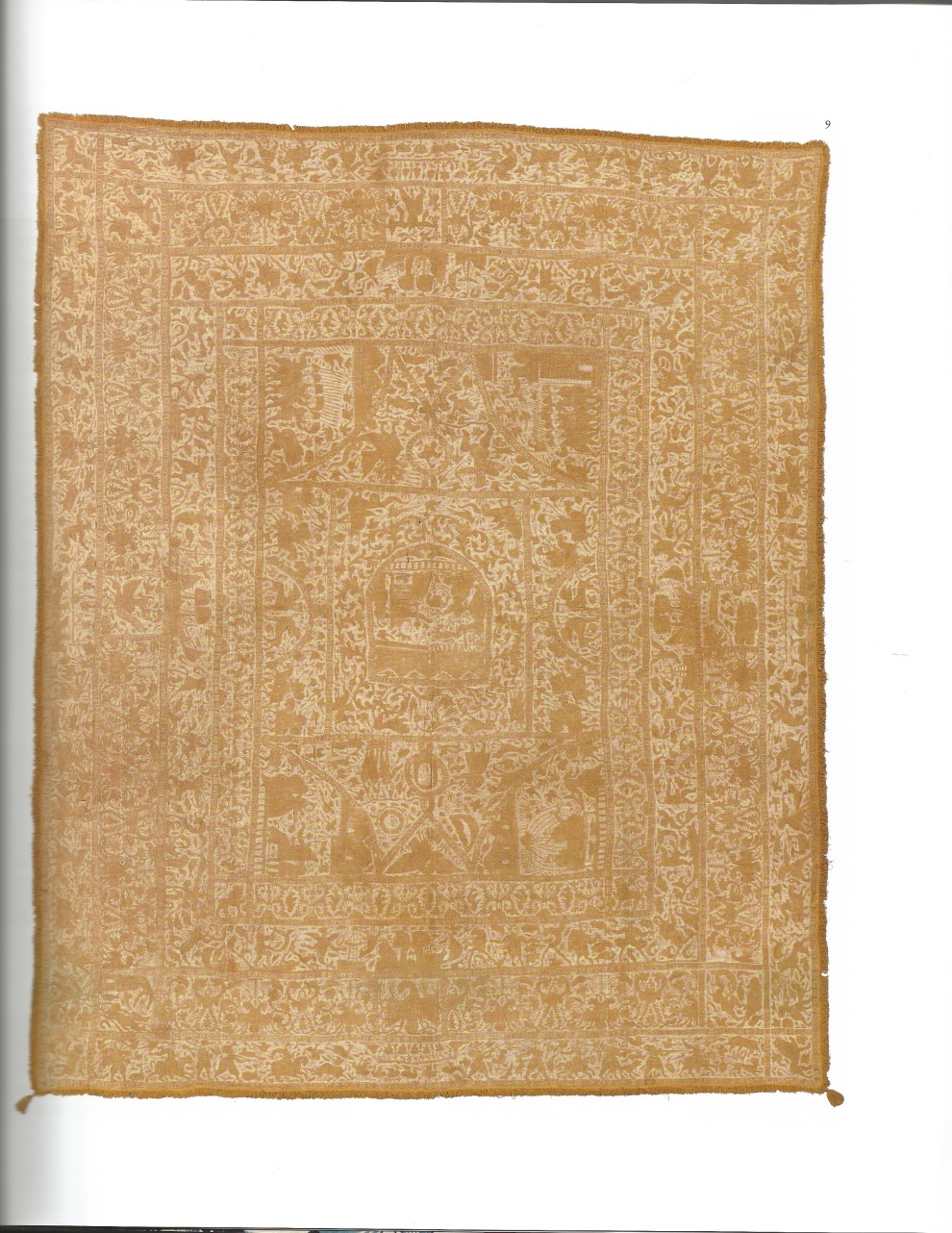 People used to embellish their mattresses with textiles almost unimaginable to those of us who have spent too much time over the years at Bed, Bath and Beyond. Interwoven Globe takes as its premise the interconnectedness of cultures around the world in producing objects that were both intrinsically beautiful and historically fascinating. Japan, China, Turkey, Iran, Europe and the Americas all played a part. The fashion for the “exotic” bloomed in trade.

From the first glide into the opening room, I’m sort of oozing, mentally, into the fabric, wondering about the lucky few who get to take the stuff down from the wall and actually handle it, when I see another gem. A damask woven in China of silk satin for the Iberian market.

Elephants such as the ones depicted were customarily given as tribute to Chinese emporers and imported by Portugese kings to be used as diplomatic gifts to the courts of Spain, Austria, France and England. The ones marching along on the textiles were Asian, I learned – you can tell by the diminutive ears. On this piece the elephants have multiple tusks – of course the weavers couldn’t access an actual image of one! Instead, they drew on the Buddist six-tusked elephant described in a fifth century Chinese translation of a sutra as being sparkling and resplendent.

Another coverlet, this one produced in Mexico, was made to celebrate the wedding of the couple shown in the center.

Trellises surround them.They wear Europen style clothes, embroidered of silk dyed red with the insect cochineal and yellow with a plant known as weld, which was probably grown in Spain. The silk itself was imported from China. Again, a crisscrossing of cultures went into a flawless product, which happens to be signed by its maker, Dona Rosa Solis y Menendez, with a date of January 4, 1786 and a place, Merida, the Yucatan.

I see dresses, not just coverlets and bolts of fabric. This one was sewn in France of “bizarre” Chinese silk in 1710.

Bizarre being a term twentieth century textile historians came up with to describe silk designs at the junction of the Baroque and Rococo periods, usually heavily brocaded and beaded, with glittering metallic threads.

More women’s dresses. Gowns you could rest your elbows on, they had such wide panniers, a variation on the hoop. The robe a la francaise, here sewn in Germany of Chinese-painted silk moire, which definitely would have been my choice in the 1740s if my door frames were wide enough to allow me access.

And men’s dresses. The banyan, or informal morning gown that well-dressed men wore over their clothes, is represented. Sewn in France from Indian fabric that had been stamped with wooden blocks.

The inimitable John Singleton Copley caught Joseph Sherburne lounging in his banyan in 1767, wearing a cap to cover his shaved, not at the moment bewigged pate.

Charmingly, then, a dress also for a very lucky little boy. Linen embroidered with tulips, roses, carnations and fruit trees. Yes, a boy. Male children wore frocks alongside their sisters until they were around five years old. 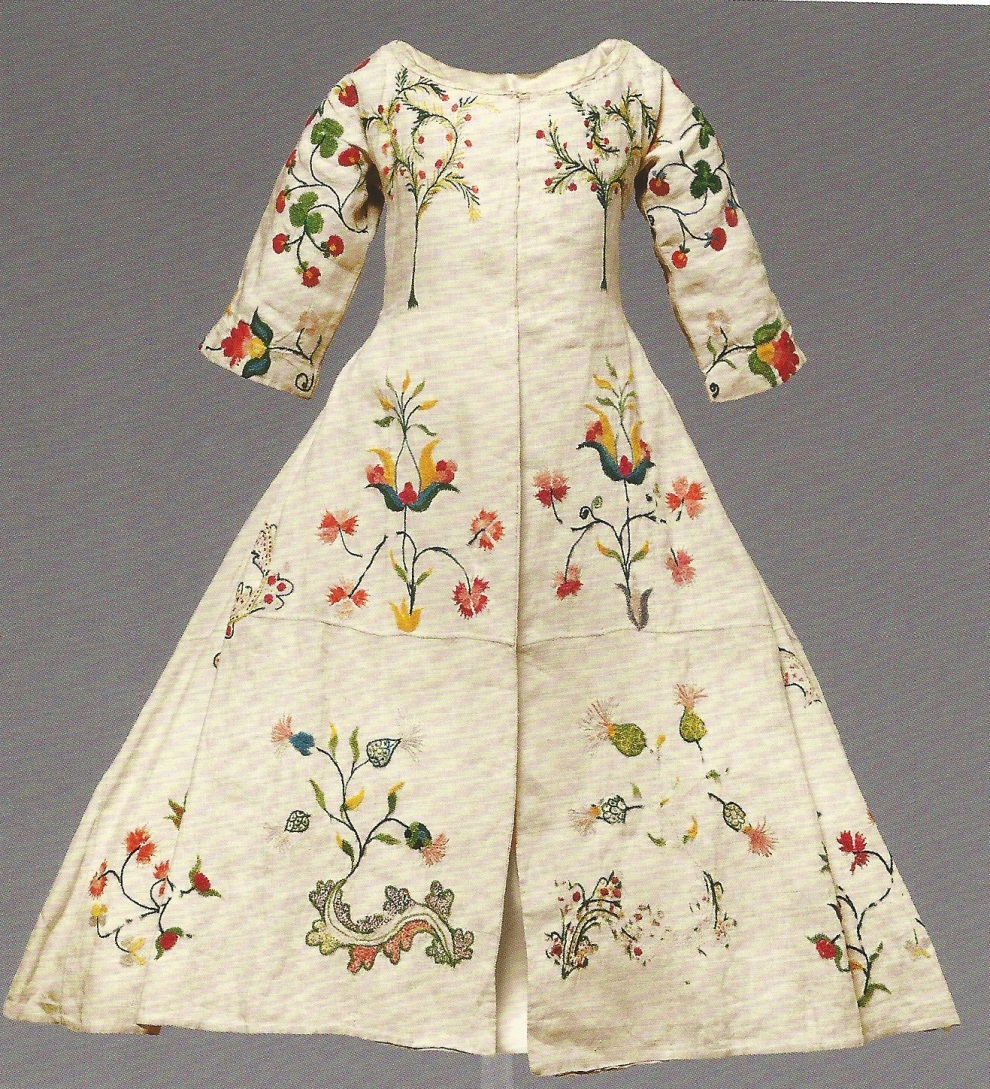 Something I really like, that brings this luxurious trip to the past down to earth: a textile sample book, dogeared by English merchants’ hands, with 500 swatches of ordinary cloth, no fancy silks or embroideries here, that would have been worn by sailors, artisans or enslaved people in North America. 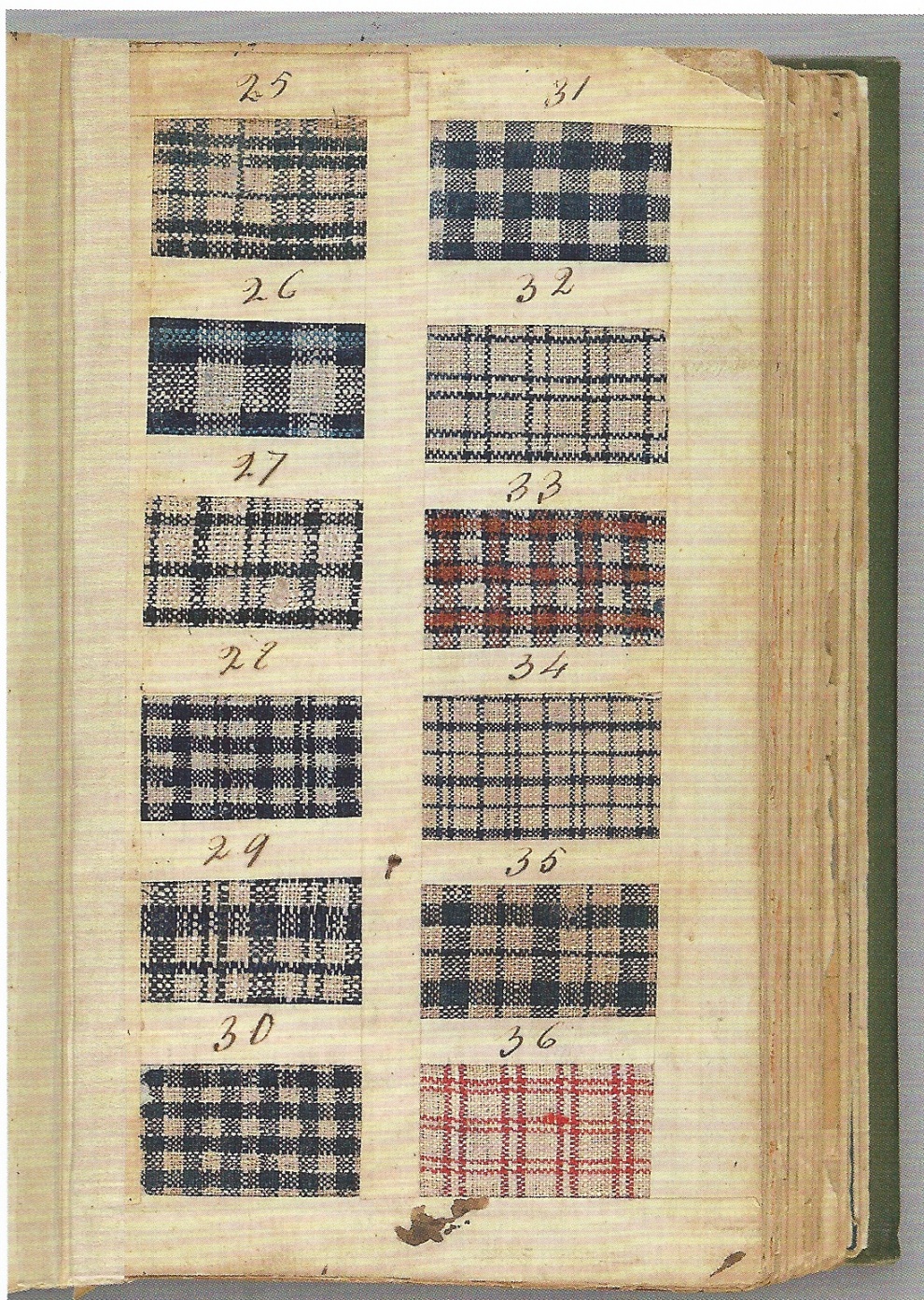 And I haven’t even started on chintz. Suffice it to say there is a tutorial that totally satisfies my long-term desire to understand the mechanics of chintz production. It’s incredibly elaborate, and if you pay me enough money I might try to explain it to you someday.

After this flood of textile experience, sitting with some restorative strong coffee in the courtyard, I notice the air smells like roses, and the fabrics we all wear appeared simple, streamlined. There are some stripes, yes, but no elephants, no carnations, no trees of life, no metallic threads glinting in the pale sunlight. I see a woman in a plain pink sweater. I see denim. I see a young man in a simple, blue-checked shirt, his foot in a boot, sitting in a wheelchair like me, running his hand through his hair. He seems weary, now that women no longer dress themselves in the robe a la francaise, now that all the flash has gone out of coverlets.

9 responses to “Silk Thread on Cotton”