The dance, choreographed by Mark Dendy, is called “Ritual Cyclical,” and it takes place at Lincoln Center, at the north end of its outdoor plaza, on the Upper West Side of Manhattan.

Not at the fountain. That would be too conventional. 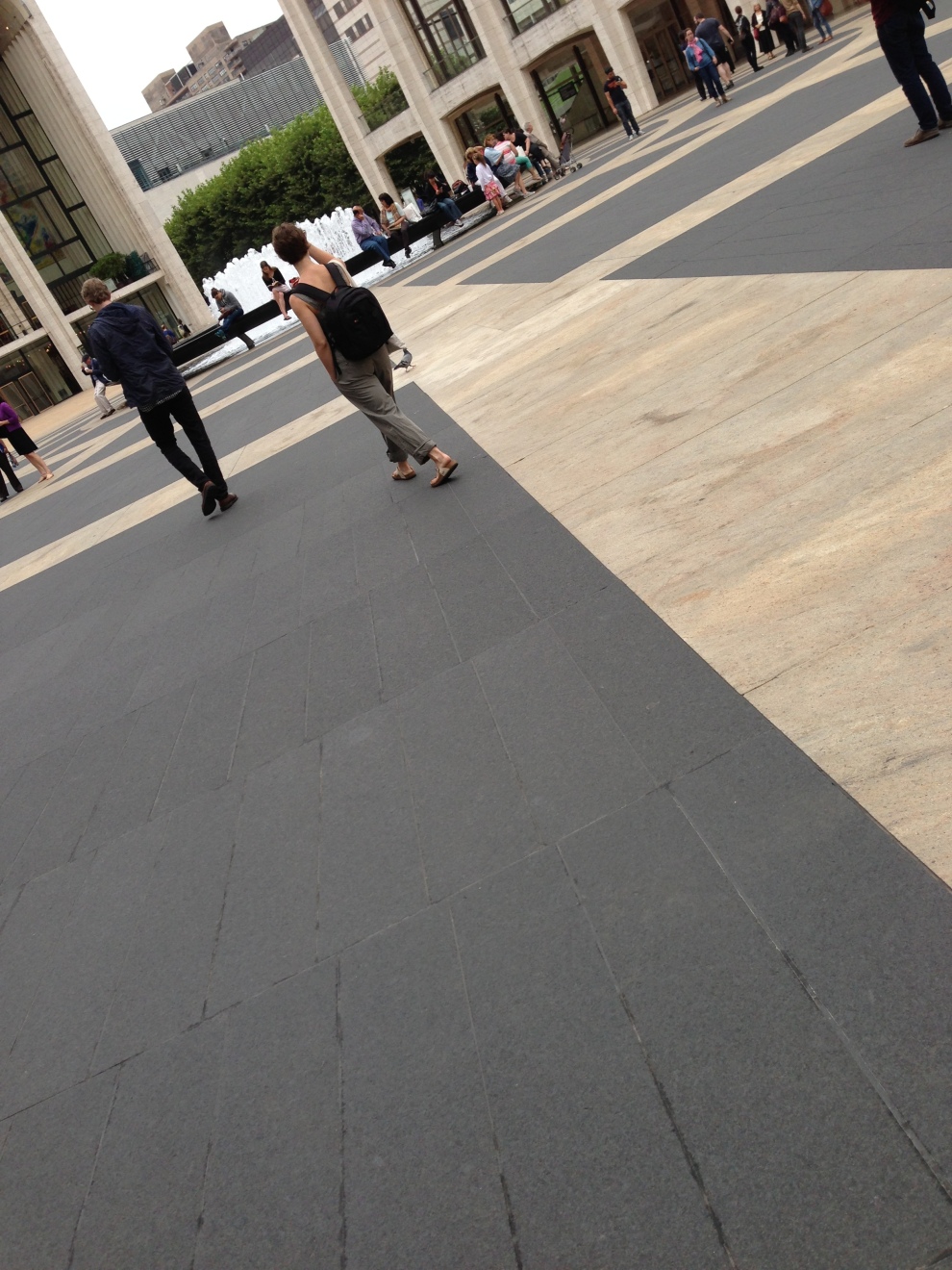 It takes place at the pool, the rectangular, shallow reflecting pool crowned with a sculpture by Henry Moore.

We know the dance is supposed to mysteriously start out of nowhere so as soon as Josefa and I get there we start looking for signs.

It’s hard, because New York is all signs. We have heard there will be some eighty dancers in this flash-mob-ish piece, so anyone could be a performer. Everyone is facing the pool, then someone dressed in business clothes will bolt behind you, a hand on your shoulder. A dancer.

A disembodied voice welcomes us: How to see this piece? Fluidly, moving along, circulating, there is no front, it’s all around, constantly shifting, and changing, and the audience needs to change with it.

We talk about cameras. Josefa has a great camera and a better eye, and most of these are her images. 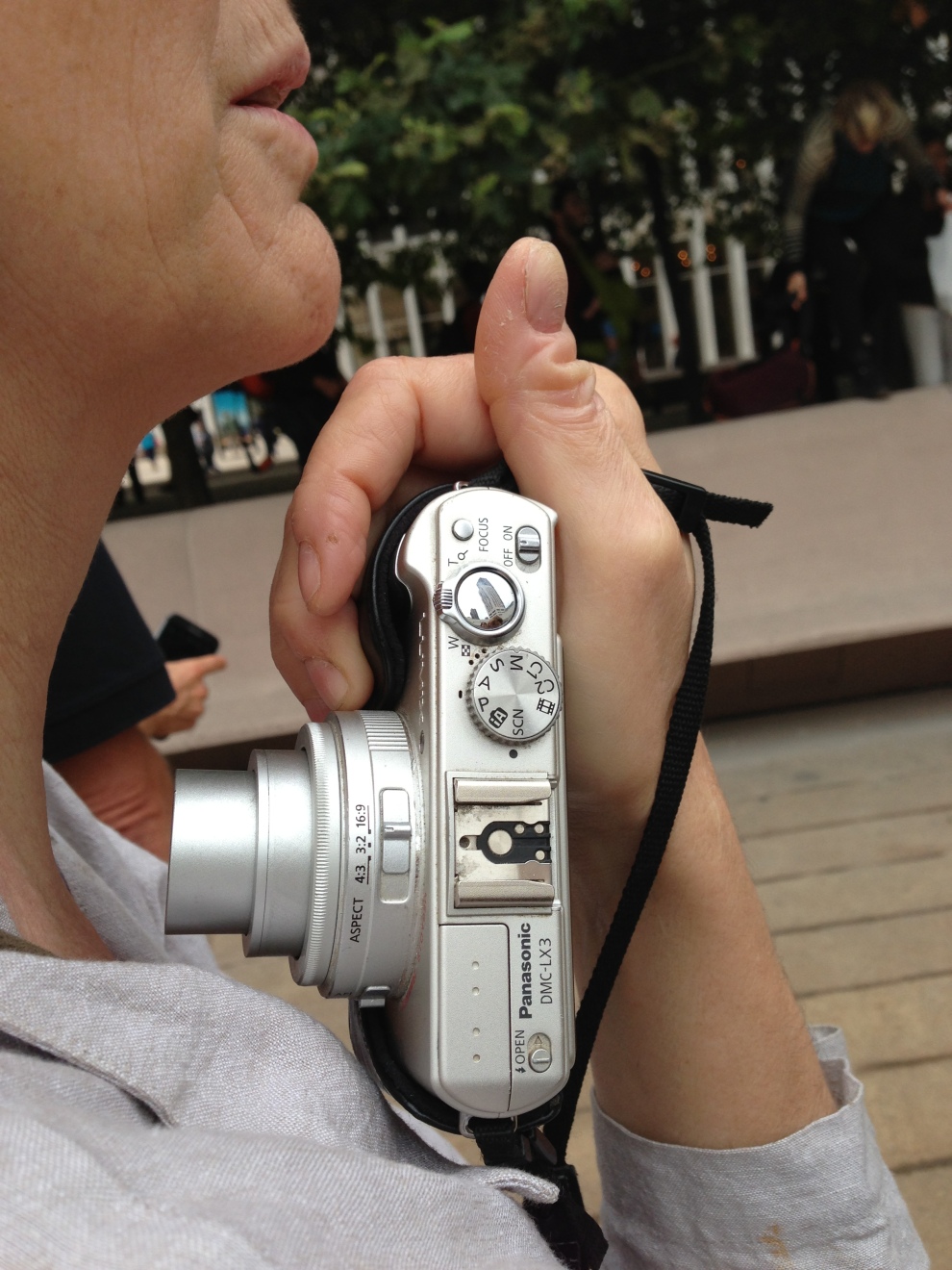 How to get the best shot here, where good shots are difficult? I complain that I can’t get a long-distance picture and Josefa tells me a little about the debate over the telephoto lens. In the world of photography, she says, there is thinking going on about what is the responsible way to document something. Is it intimate in a way that is not so good to shoot from far away, rather than close to the subject? The telephoto might be dishonest.

Around peoples’ heads, around  peoples’ cameras, we see people holding their hands up to the sky, waggling their fingers.

It’s as if they are hailing a space ship. The music of the Kronos Quartet soars from speakers all around. It’s six o’clock, just past the afternoon and still not dusk. An hour of expectation, and this piece seems to be a lot about expectation. We’re all crushed up against one another, against hair and shoulders, bellies, hips. It isn’t so bad, strangely.

New Yorkers in their summer finery. 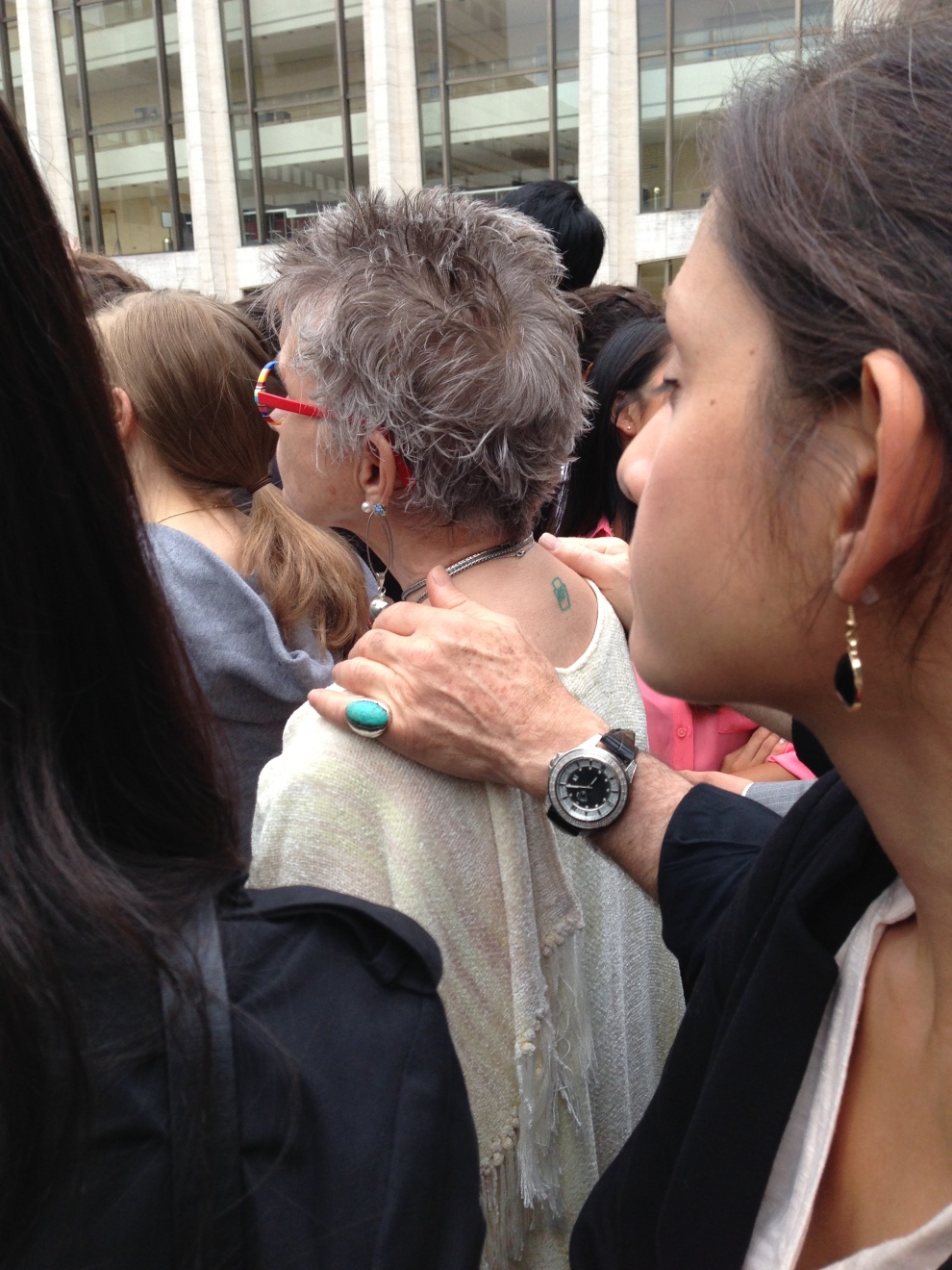 The woman with red glasses has a green tatto of a number on the back of her neck. Josefa always wonders what the numbers mean.

Kids in fatigues already barked at spectators to stand back, clear the area. But the crowds surge. 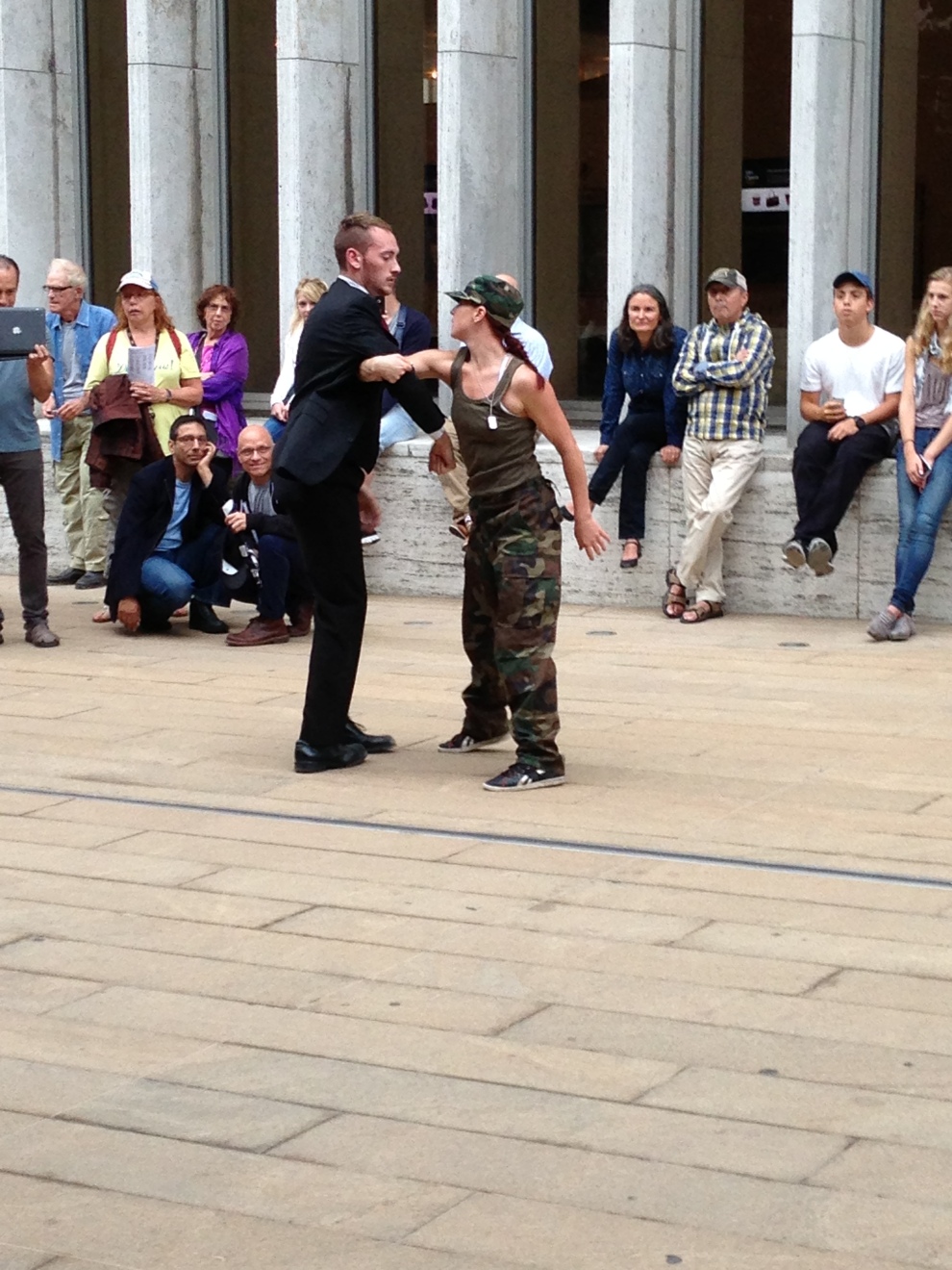 There’s a bum sitting on a concrete bench. Should he be here? Really. Harrumph.

Now girls in white are caressing the water, dripping it across their bodies. A beautiful white-shirted man removes a golden crown from his head. 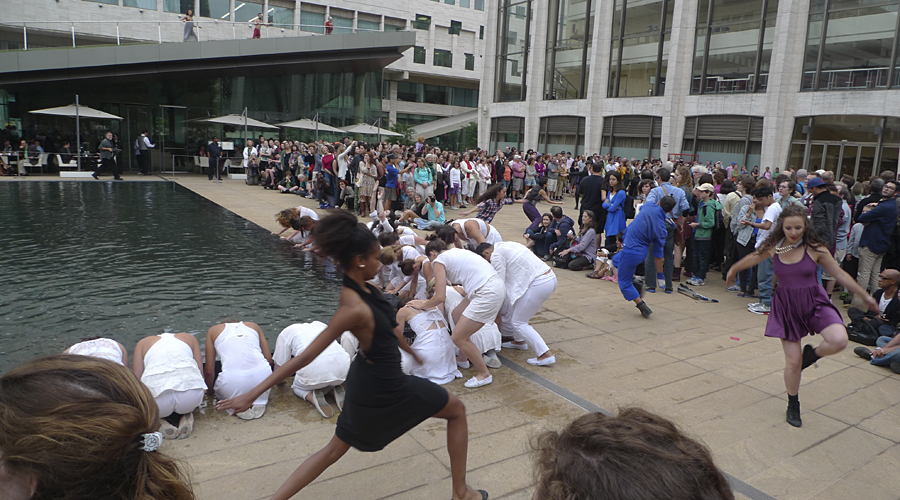 The dance has begun.

It proceeds on all surfaces, all around, people writhing and twirling, in all manner of costume.

A young man and woman splash and play and court in the middle of the water. She goes piggyback. Up on the green grass plane above the pool, an audience of three dancers stretch their bodies, do what dancers do.

Then the crowd shifts to the grove of small trees just to the south. Human forms in blue, grey trunks. Josefa: It must be nice to dance against trees like that. 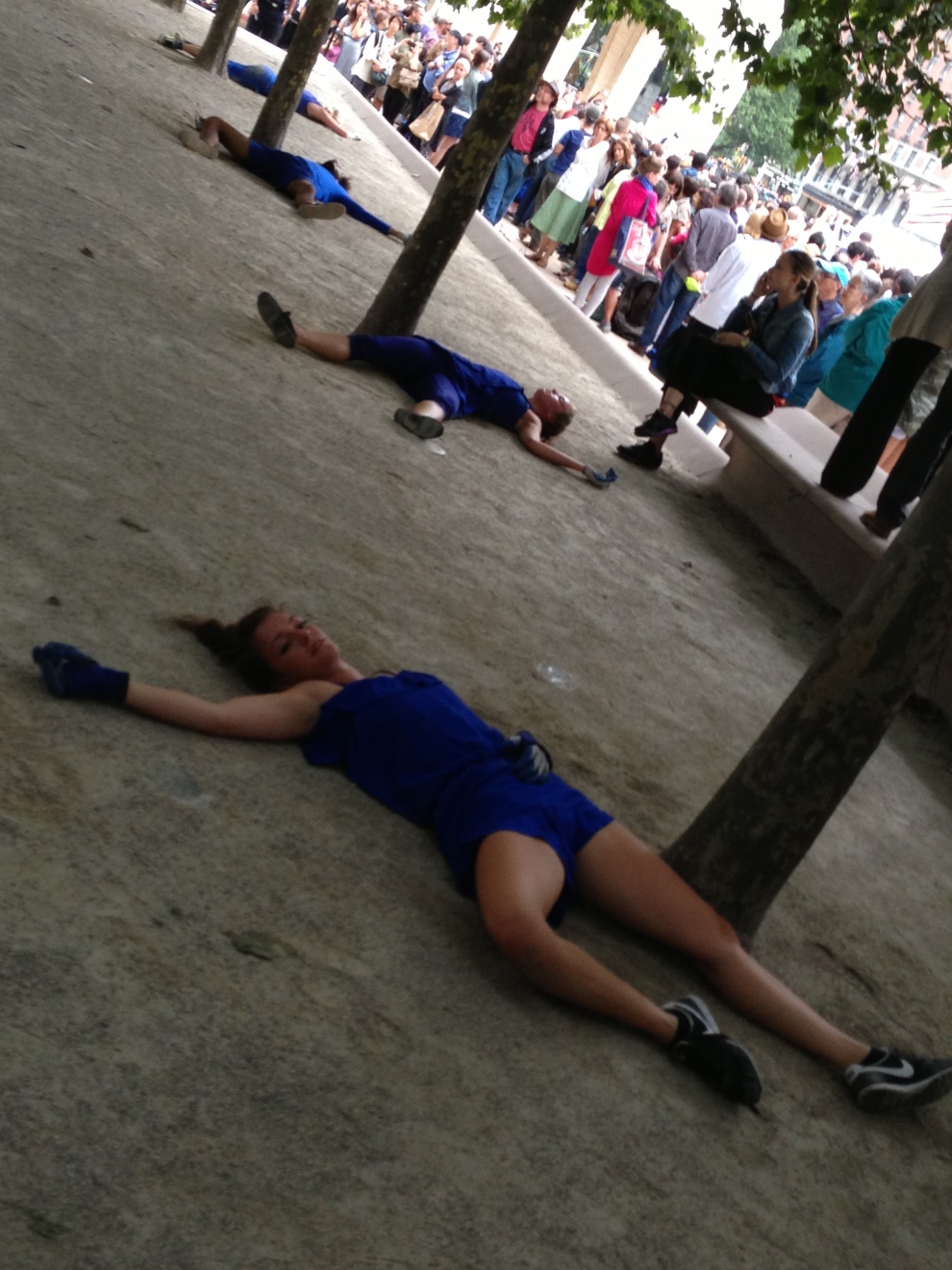 They collapse, and other dancers erupt, doing Latin steps next door.

We have a realization. The bum is a dancer. He has appeared everywhere, and is not an interoper, except in our consciousness.

His clothes are dirty, he picks up trash from the ground. A dirty dancer. Josefa takes pictures as he twirls, relishing his intransigence.

Is he homeless? a man asks me.

The homeless dance? he says.

For a finale there is a stage in front of the New York Public Library for the Performing Arts and American tunes: The Battle Cry of Freedom, Dixieland, Elvis, Hendrix.

USA! USA! The performers yell. The crowd presses up close yet everyone gives each other room, room to breathe.

We can smell sweat – the dancers’? Our own?

They hoist a flag a la Iwo Jima. American uniforms, then, wow, the vogue-ing, marching dancers strip to their briefs and pitch their shirts and pants out to the audience like rock stars.

Mark Dendy told The New Yorker, “Every day, every New Yorker comes into contact with about two hundred thousand other people, and they all depend on each other. So in this piece we do this thing called New York City together.”