A raspberry hike. You have to get the timing right, and we rarely do. 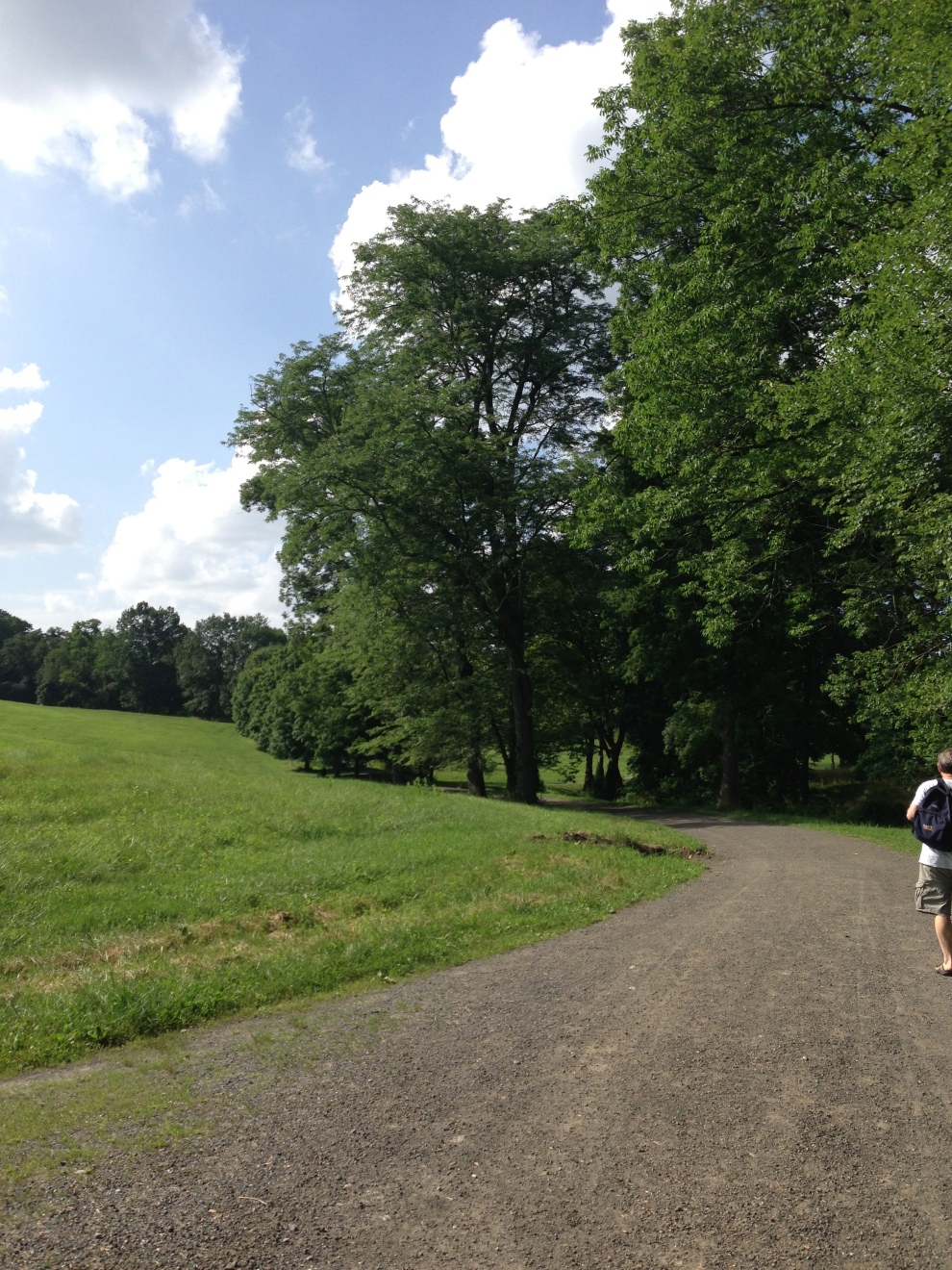 The required precise moment is when the wild raspberries have developed so that the bolus is bursting with ripe fruit. If you go a few days earlier, so eager to pick, only one or two in a bunch has turned a sweet, deep red. If you go a few days too late, the berries will have been harvested by birds and you’ll bring your bucket home empty.

We take ourselves to the rolling hills and deep woods of the Rockefeller State Park Preserve in Pocantico Hills, New York.

The late afternoon sun casts long shadows from ancient trees. Many of the fields are cut for their hay, and perhaps for their beauty. 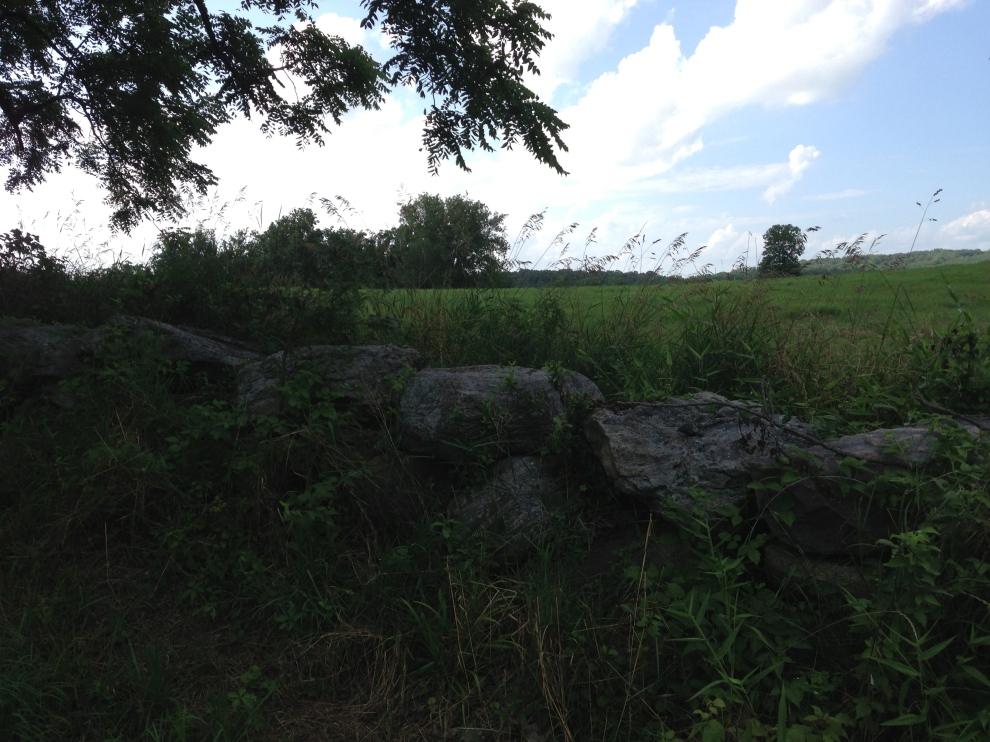 Evidence of horses abounds. We know where we’re going, the raspberry trail, the same place we go every time. There, you’re almost overwhelmed by the bushes on either side of you, and when you plunge in you can count on getting raked by canes. There is some satisfaction in picking berries in the same place every year.

But there will be no fruit cobbler after this year’s berrying. Yes, we were too antsy. The handfuls we envisioned just weren’t there.

Hiking back to the car, we pass the allee of lime trees that seem to mock us with their full to sagging bellies. 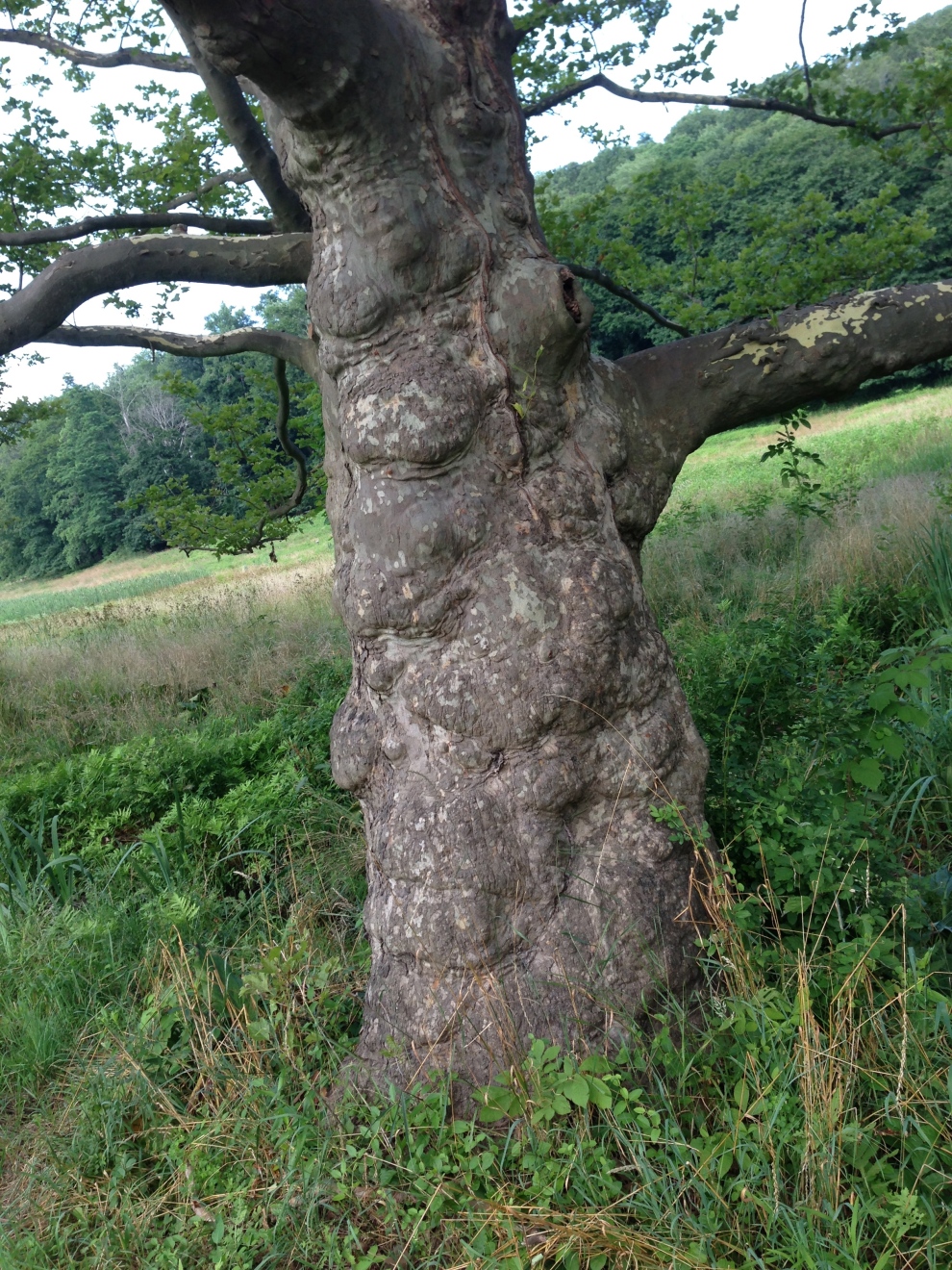 We’ve already picked what we could find. 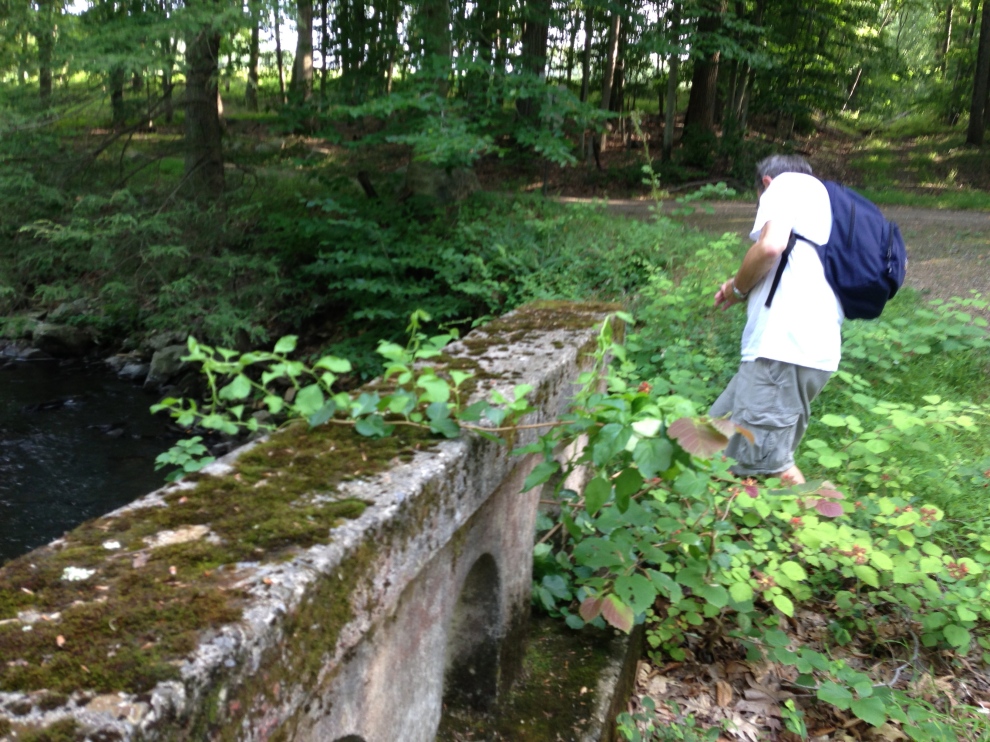 Taken a break in the heat.

Splashed around a little in Pocantico Creek. 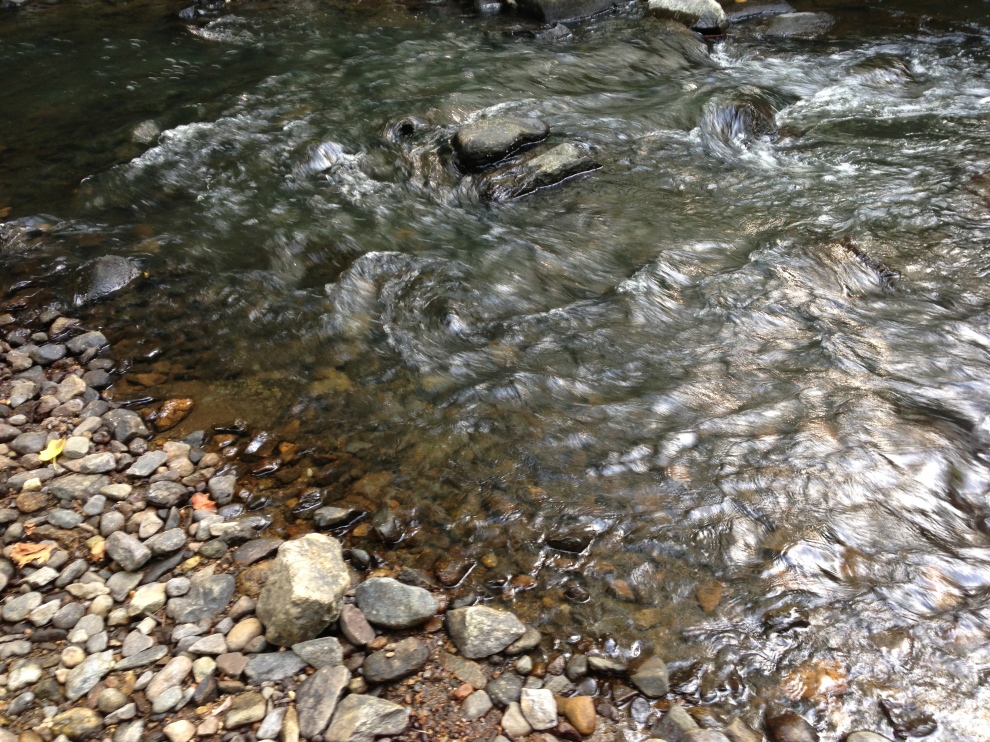 In the meantime, I’m thinking about the berry-picking scene from the third chapter of The Orphanmaster.

FOR A LONG TIME, to Blandine, Africans represented only one more element in the growing horde that Manhattan drew to itself. All that changed one sparkling July afternoon.

The Dutch made war upon the Esopus tribe that summer of 1659. The violence of the Esopus War, the retaliatory massacres, the burning of cornfields and villages, happened far to the north of New Amsterdam, near the town of Wildwyck. So far, nothing of it had directly touched the settlement.

Just to be safe, the schout ordained that no settler should venture out beyond the palisade wall without armed escort. But it was the high summer season, the raspberries on the hillsides only a short few leagues from town needed gathering in, and the colonists loved their summer fruit.

A band of a dozen settlers, primarily women and children but with two Company militiamen along, headed out from town through the land-gate. The militiamen carried firearms.

Blandine joined them. She enjoyed raspberries as much as anyone, and liked the easy feeling of community among the pickers. It was a tradition. She had picked every year since as a child she went with her mother and father. Blandine always relished getting beyond the confines of the colony’s northern wall to the wilder lands beyond.

The area where the tiny juicy drupelets grew seemed perfectly secure. Bouweries—the farms of the countryside—open meadows and dwelling-houses dotted the landscape, marked also by the major thoroughfare of the Post Road, the link between the southern tip of Manhattan and the territories to the north.

As the group passed Little Angola, one of the women there, Mally, hailed Blandine.

“You going berrying?” she asked, seeing the woven basket Blandine carried over her arm.

Blandine knew Mally casually, having employed her and her half-sister, Lace, to do hemming on linens she imported from Patria. The finished product—pillowcases, bed sheets, handkerchiefs—commanded a higher price than raw cloth.

Blandine saw Lace coming up behind Mally, carrying sacks for fruit. No one had any objections to the Africans joining the group, so Mally and Lace came with them.

If Africans had any status in the colony at all, they were usually called by the last name of the region from which they came. So Mally and Lace and others, too, all were given the same last name, Angola. There was no thought behind it, and it was by no choice of the ones so named. The Dutch authorities simply needed a distinguishing label to put down on paper if the Africans were ever hauled into court.

A hot July day. Insect noise swelled from the meadows, died and swelled again. Two sisters in the group, Tryntie and Aleida Bout, sang a hymn of thanks, Nederlandtsche Gedenckclanck, a new anthem celebrating the Protestant victory over the Spanish Catholics in Holland.

To ask the Lord’s blessing

God our defender and guide

Through the past year

A few of the others picked up the song. Blandine noticed that the harsh rasping of the locusts, katydids and crickets easily drowned out the quavering human voices singing God’s praises.

She trailed behind the group. With the journey out of town, her abiding sorrow lifted a little, the sadness she suffered since she lost her family. Yet these were haunted precincts for Blandine. It had been a different, more carefree girl who traipsed through the sweet berry bushes when she was young.

The road they followed up the island led them to a small rise with a view of the wide river to the west. The water’s surface reflected back the gunmetal blue of the sky. Blandine noticed a flattened thatch of grass. Probably nothing more than a night-bed for deer.

As they diverged from the road onto a path, Blandine saw that a collection of canoes had been pulled in amid a reed-bed on the rocky Manhattan shore just below her. They stood empty, beached in a line.

From the water, she thought, no one would see the skiffs among the reeds.

The sky was patched with high white cumulus, the men had taken up the hymn along with the women, and the group entered in among the scattered cane-fields of raspberries. The fruits dangled, crimson and abundant. Emperor and hairstreak butterflies sipped on the berry-sugar. A cloud of them arose as the Dutch, crying out like children, plunged into the bushes.

In a first gluttonous spasm, the settlers didn’t bother with their baskets, they simply stuffed whole handfuls into their mouths.

With Lace and Mally, Blandine wandered away from the others. The berry trail guided them in random directions. Each prickly, laden cane led to the next, as though there would be a secret revealed at the end of the path.

Blandine left off picking. She sat on the ground amid the canes, her aproned skirts spread about her. She looked east toward the Post Road and a massive stand of jackpines that lined the way. Mentally, she calculated the worth of the trees. Masts for the navies of the world.

Far off, on the roadway, a drover herded a pair of cattle, heading toward town. Then, between one tree and the next, he abruptly disappeared. She waited for the man to show himself again. His cattle wandered down the road without him. She could hear their bells tinkling.

After a quarter hour, the clouds fully reefed the sky, hiding the sun, and a breath of cooler air rose from the river. The colonists quieted, intent on filling their baskets. Blandine struggled to maintain her lightness of heart. The cows still roamed alone. What happened to the drover?

She quickly rose to her feet.

“We have to—” she said, but broke off. “We should join the others.” They threaded their way back through the berry canes to where the dozen pickers worked.

Everything was all right. The clouds uncovered the sun, and the red-stained faces of her fellow townspeople reassured her. She was a ninny to be nervous. Odd how the wilderness struck her differently at different times. Glorious one moment, threatening the next.

A hand fell on Blandine’s shoulder. She jumped, surprised.

“Look within,” Patricia Reydersen said, displaying a basket nearly full with fruit. “What have ye been at? You’ve picked hardly nothing for yourself.”

“I’ve got more than anybody!” crowed the nine-year-old Reydersen daughter, Ereen. Patricia Reydersen had been one of the matrons who was kind when Blandine was newly orphaned, having been close to her mother, Maritie. Patricia’s hearth offered the hungry girl cider and cookies.

Militiaman Jerominus Tyinck, his chin blood-red with berry juice, stood nearby. Blandine approached him. “Did you mark the canoes?”

The man looked at her blankly.

“Along the shore,” she said.

“No doubt they’re over from Pavonia, lass,” Tyinck said, naming the colony across the river from Manhattan. Indians there were known to be harmless. “No need to fear.”

Tyinck dismissed her, a young goose of a girl, pulling at her curls and trying to keep her hands free of berry juice. The militiaman strode away toward an area of heavy cane. He propped his gun against a stump and worked his pipe.

Silence. Out of that silence, a shout.

Vocalizing loudly, an indian warrior appeared, running pell-mell from the concealing forest. He swung his war-club and dropped Jerominus Tyinck with a tremendous blow to the head.

Screams. As more natives showed around them, a wide-eyed panic gripped the colonists. They were outnumbered. The children clung to their mothers. The women moaned: “Neen, neen, neen.” No, no, no.

Resoluet Waldron, the other militiaman, engaged his musket. The gunshot sounded enormous in the still glade. The bullet spun one of the attackers around in a bloody whirl. But that was all. Another raider grabbed the gun out of Waldron’s hands and smashed him with it. He, too, fell to the ground.

The women and children were alone.