Today I befriended my inner phragmite. 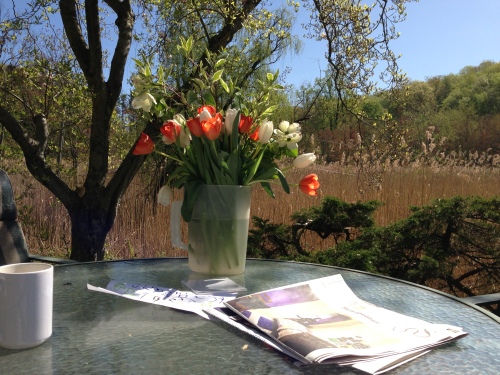 You’ve probably seen the reeds that form the backdrop for these merry tulips hundreds of times without knowing their Latin name. Marsh grass, aka phragmites. I’ve been thinking about the reeds for a while now, since a landscape-architect friend of mine came to the Cabin and explained that they characteristically grow in “degraded” environments. It hurt a little to know that my beautiful grassy friends have some kind of noxious, invasive taint.

So I was glad to attend a class today that was set up to make art with phragmites and their more distinguished relative, the cattail. 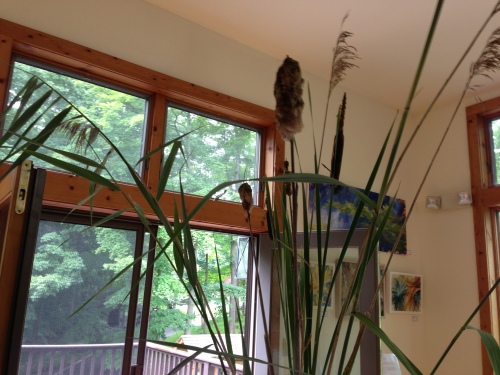 An airy display greeted my eyes upon entering the classroom, at the Teatown Lake Reservation just down the road from the Cabin. Paper and pens and brushes of all different sorts lay ready and waiting.

While phragmites are used around the world to weave mats and roof thatch, Laurie told me, she didn’t see a use for them in the art studio until she recognized them as “painting partners.” They’d been “demonized,” she said, “by the science people, but as artists we try to look upon them with the most open mind possible.” 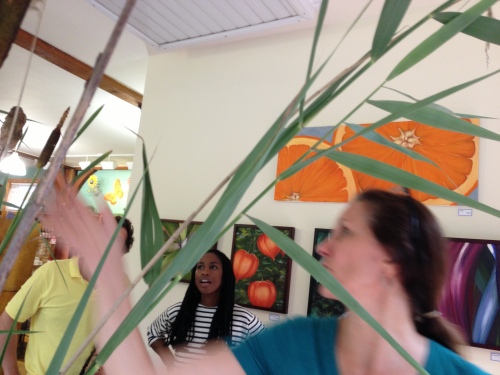 What’ s the beef with the phrags? Laurie: “They’re pollution tolerant whereas cattails need cleaner water to thrive.  Certain species need the cattails, and when the phragmites take over there’s no room for them.” Said Joanna, “The phragmites grow closer together and it’s the understory that doesn’t allow the shorter plants to grow.”

The artist-teachers discovered that for their purposes, the phragmites has a hollow stem like a traditional quill pen whereas the cattail has a spongy interior “much like a magic marker,” as Laurie said. Both work for painting. 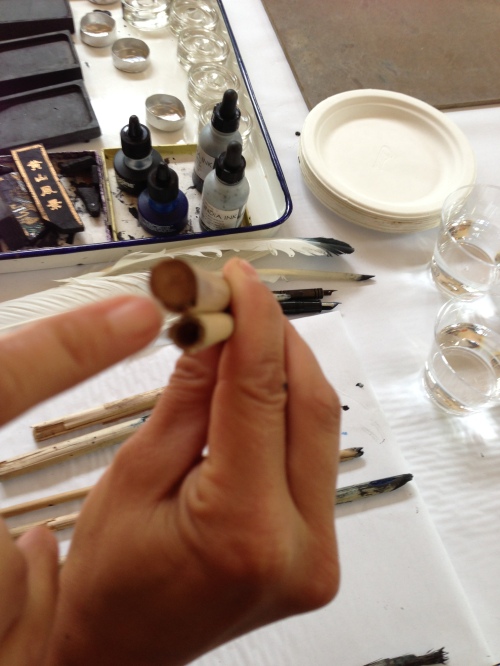 Some say the phrags  came over from China in ship holds long ago, but have proliferated in the last few decades. Some say they clean metals out of sediments — a good thing, maybe. Don’t get Laurie going about research scientists, conservation scientists, corporate scientists, biological scientists, plant scientists, marine scientists. “It’s old-school thinking that phragmites are all bad,” she said. “They have a relationship with places that have been invaded.” 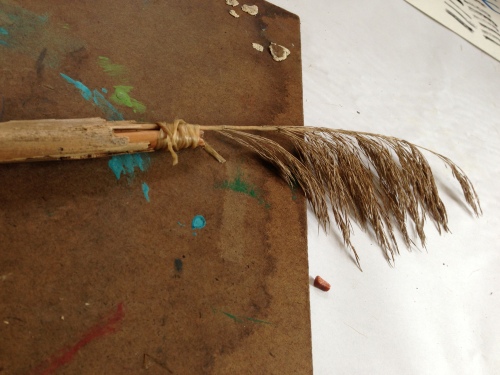 We dipped the reeds in ink. 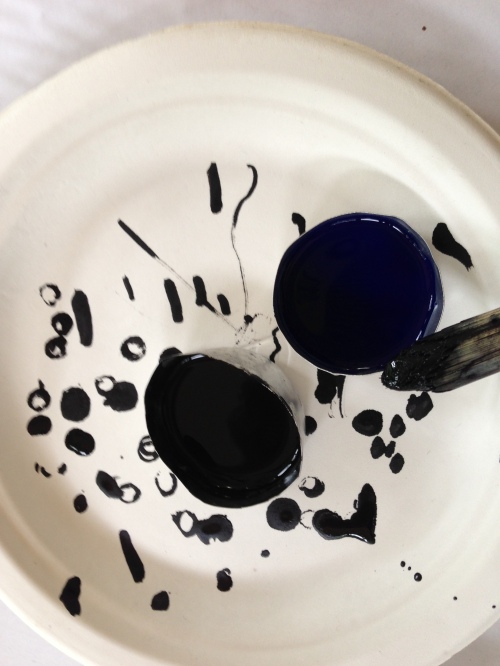 We made our own brushes if we wanted. (I wanted.) We took our time, something Joanna advocated. 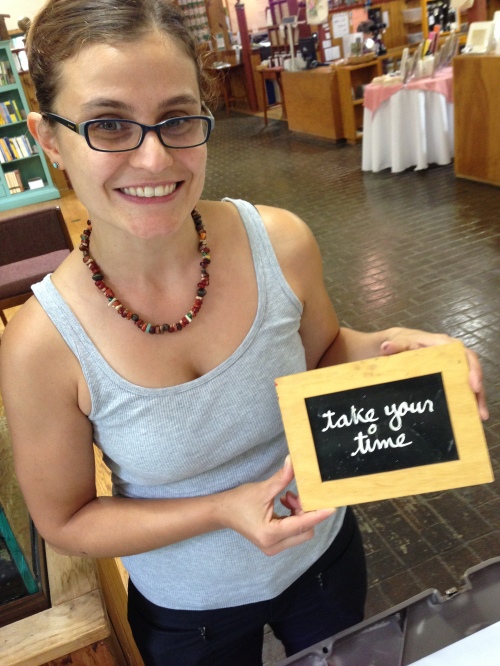 Now, cattails are indigenous, and have a plump appeal. They make “comforting places for a bird to sit,” said Joanna. 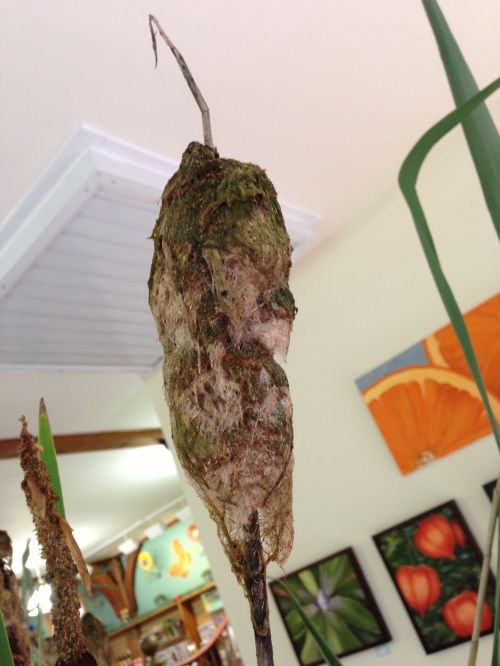 Their roots are tubers. They’re amazing. Yes, yes, everyone loves a cattail, I know that. It would be un-American not to. But let’s not leave the phrags in the lurch.

People of all ages were pressing them into service today for art. 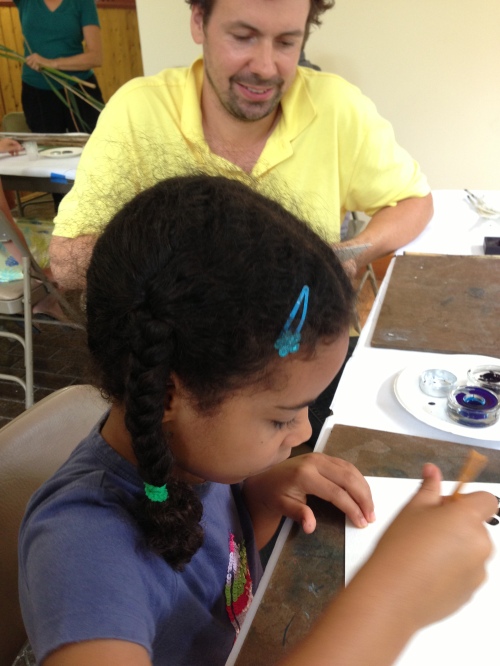 In the meantime, there are well-meaning authorities who are trying to destroy parts of venerable Piermont Marsh, just across the Hudson River, with what they’re calling an “enhancement project.” I’ve canoed there many times, and know it as a mystical place with its towering grasses. Good bye, 200 plus acres of phragmites, which have been a stable presence there for 2,500 years. The reeds protected the riverbank during Sandy.

But let’s digress for a discussion of ink. In Japan, the soot that accumulates in the eaves from a pine wood fire makes good calligraphy ink, while whale fat smoke is better for imagery. I’ve left politics behind, lost in my painting, shaking loose drops of ink from my phragmite feather like a marsh-y Jackson Pollack. Laurie introduced something she’d brought along, water in a dark bowl, what she called “water as first mirror.” She said that in ancient times dark liquid was the only source for a person’s reflection.

Laurie and Joanna had gathered branches to make frames, and as I was twisting sinew around sticks I noticed someone I knew, Marguerite, coming over to create her own frame. She was positioning four graceful, delicate boughs before even beginning on the painting it will contain. 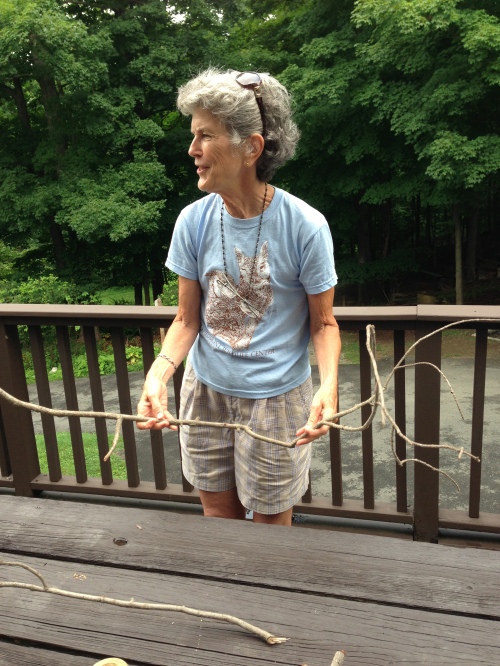 Doing it her way.

Something some entities simply have to do. Even the phragmites. 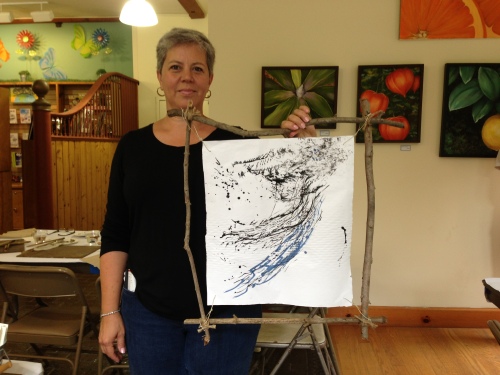 7 responses to “Phriends of Phragmites”