The train along the Hudson into town, and then the Library. An apple muffin. A picture of the scenery from the train window – marshland, wide river, rock shore, the Palisades, brown, grave, the rails spinning by – wouldn’t do it justice.

The library is the true mecca.

The 42nd Street Library, aka the Research Library, which now bears a different official name: Steven A. Schwarzman. Ten million dollars, you know, earns you an honor like that. But I still call it simply the Library. 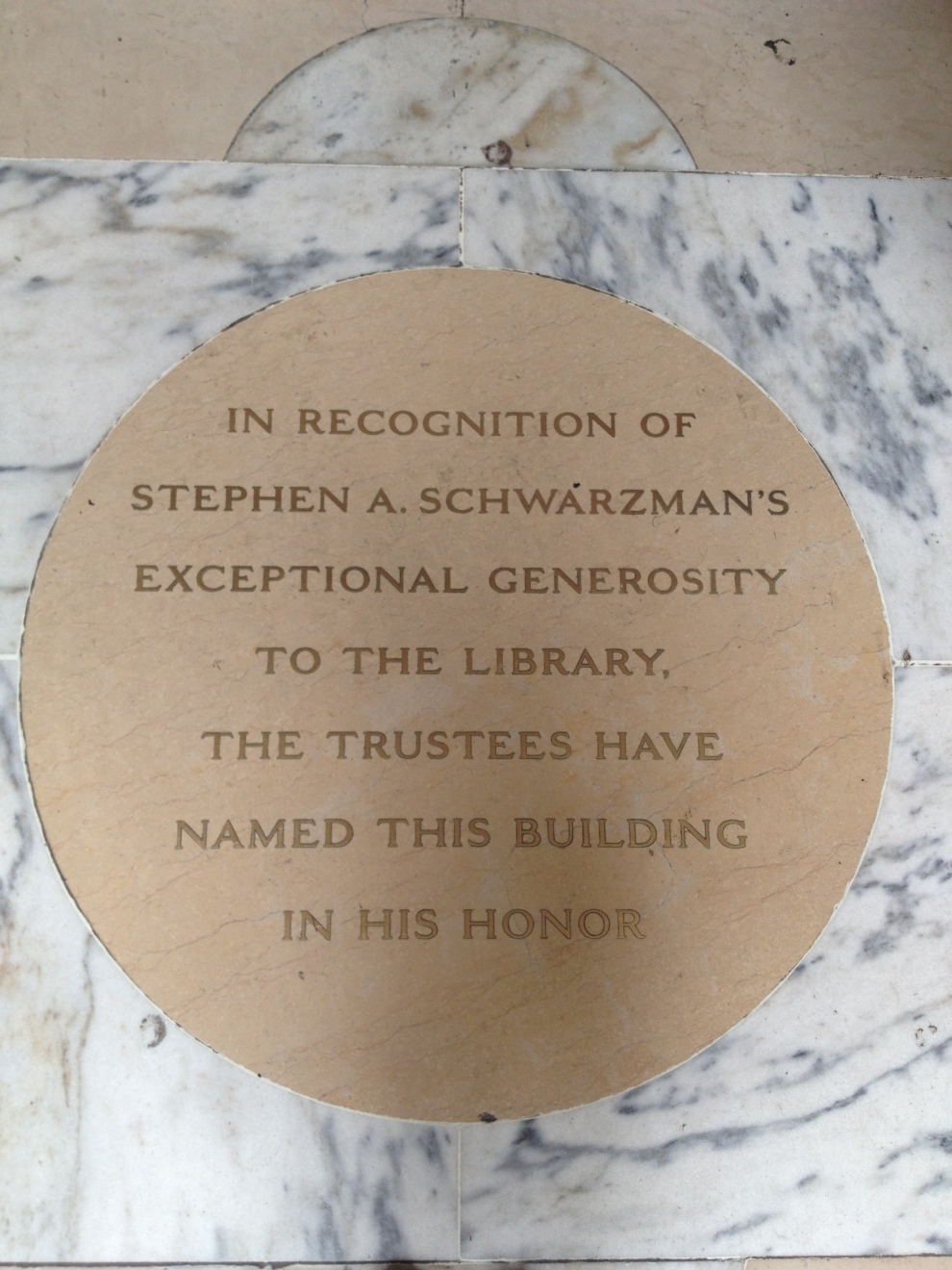 So many people course along 42nd Street, not going to the Library. It’s still a magical, secret preserve, no matter how many researchers, writers, gawkers go there. It’s still mine. 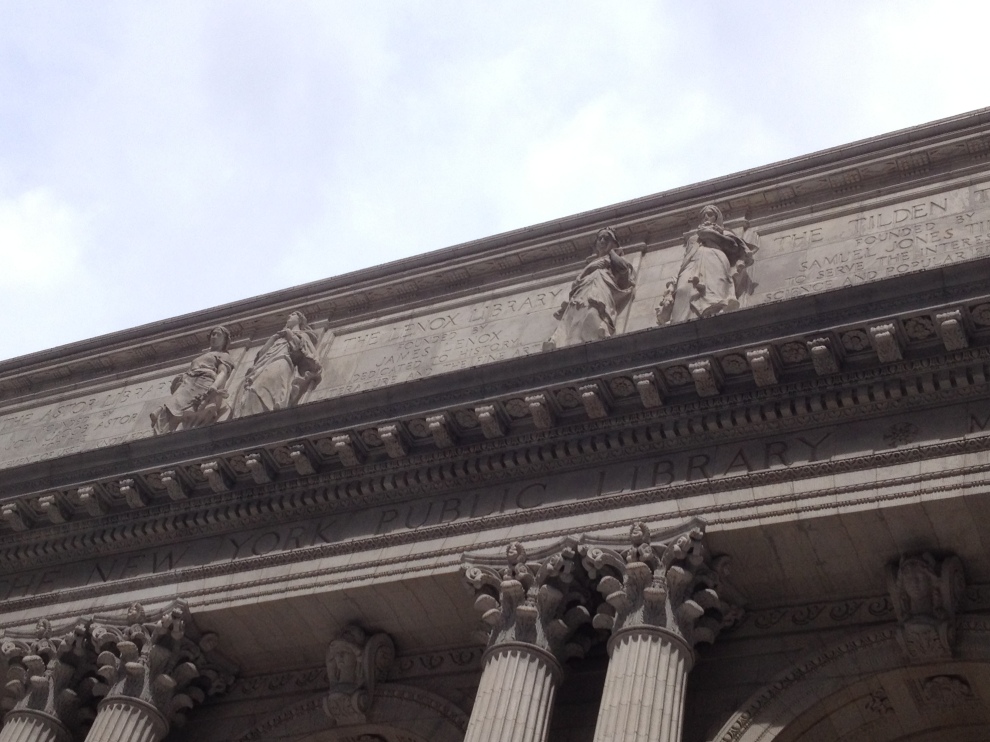 For a while I had an exclusive spot here, the Allen Room, where authors with a book contract are assigned one of a dozen carrels. You get to assemble a stack of research materials at your desk, which no one may ever touch but you, for the duration of your project. 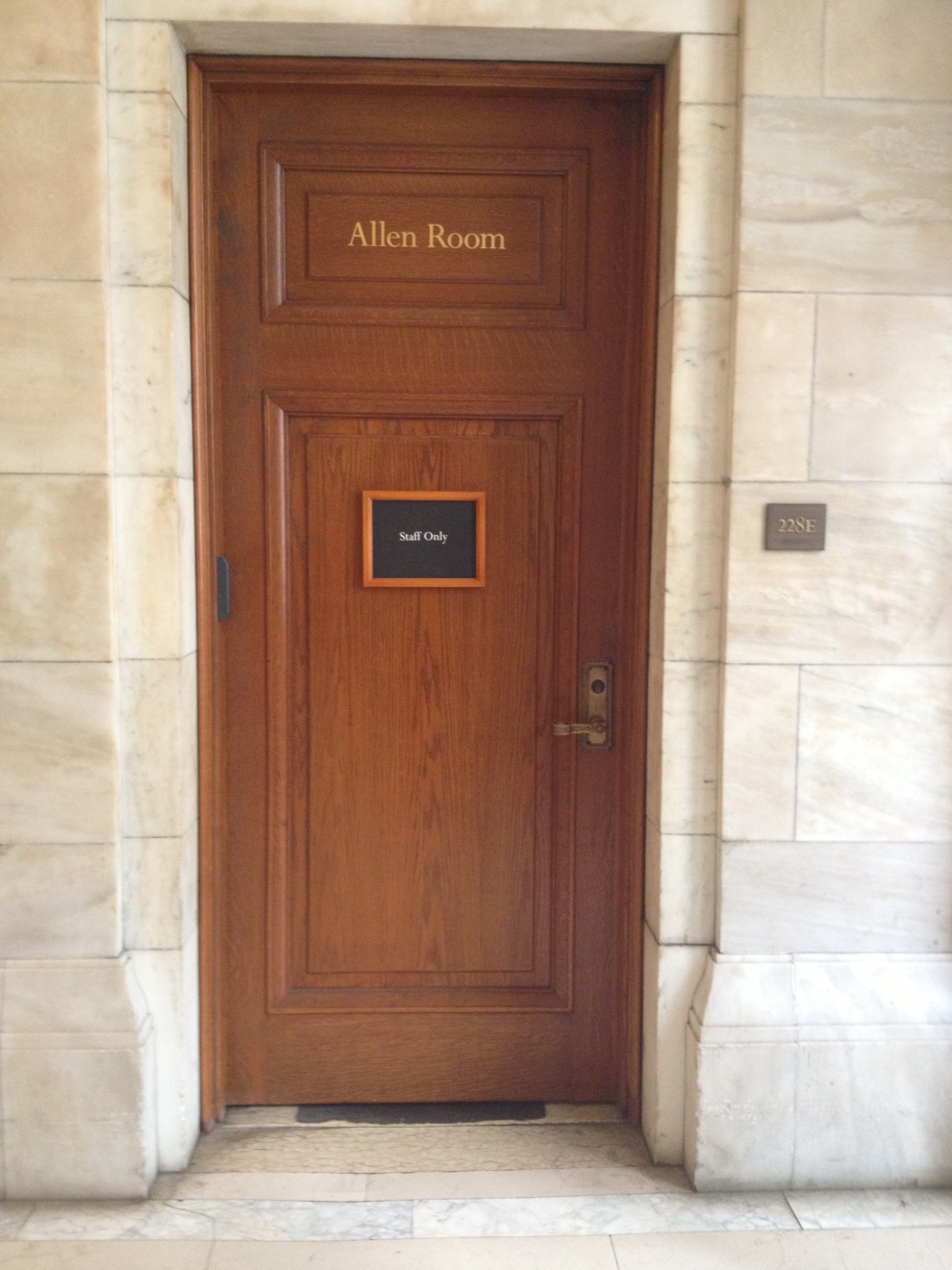 When you’re done, some anonymous monkey-boy comes and takes them away on a cart. Famous writers have parked themselves here, completing important works. I myself could barely concentrate, so dazzled was I by my surroundings. Tall, light-filled windows, a comfortable chair, a secluded napping spot if you so desire. But has my secret lair been moved? I don’t like the looks of that Staff Only sign. The library changing, that’s a constant.

Today, my destination is the Rose Reading Room, where I’m introducing Maud to the mechanics of 42nd Street Library research, and looking into some rare volumes myself. Over the portal appears this line from John Milton: A good Booke is the precious lifeblood of a master spirit, imbalm’d and treasured up on purpose to a life beyond life. Maud will be spending time here this summer delving into her senior thesis, as her grandfather did a little over 50 years before. 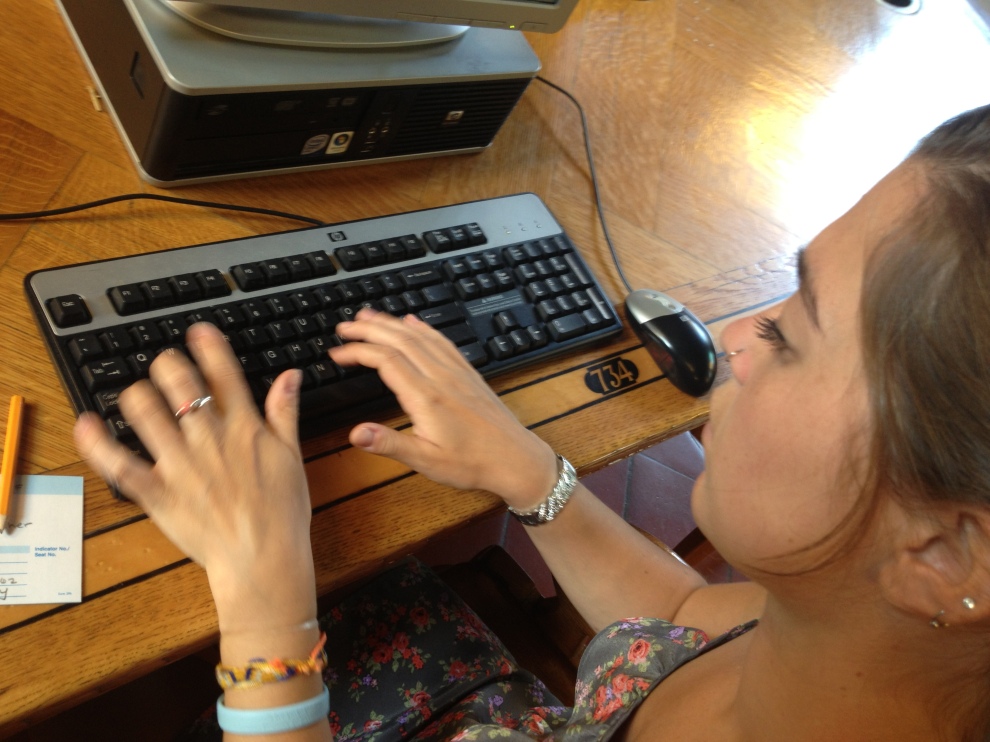 He still remembers the echoing dimensions of the Reading Room, and the delicious tomato soup at the Lord & Taylor lunch bar a few blocks south.

Maud has been here before. She spent quite a bit of time 21 years ago in a light-blue Snugli when I was researching my proposal for my first nonfiction book, Tailspin. I jiggled the small, warm bundle of her up and down at the card catalog, hoping she wouldn’t bawl. She never did. There was an art exhibition room across the hall that displayed old, grand paintings, and I recall nursing my baby on a bench in front of a large biblical scene while a passel of Japanese tourists came trotting by with their guide and sniffed at my American manners.

What was, and what is. It always interests me.

I still like to visit the third-floor murals outside the Reading Room. Painted during the WPA era, they were commissioned by I.N. Phelps Stokes — my book Love, Fiercely profiles him — and they represent the history of the written word. The artist, Edward Laning, credited Stokes in a small, discreet corner of one floor-to-ceiling panel. 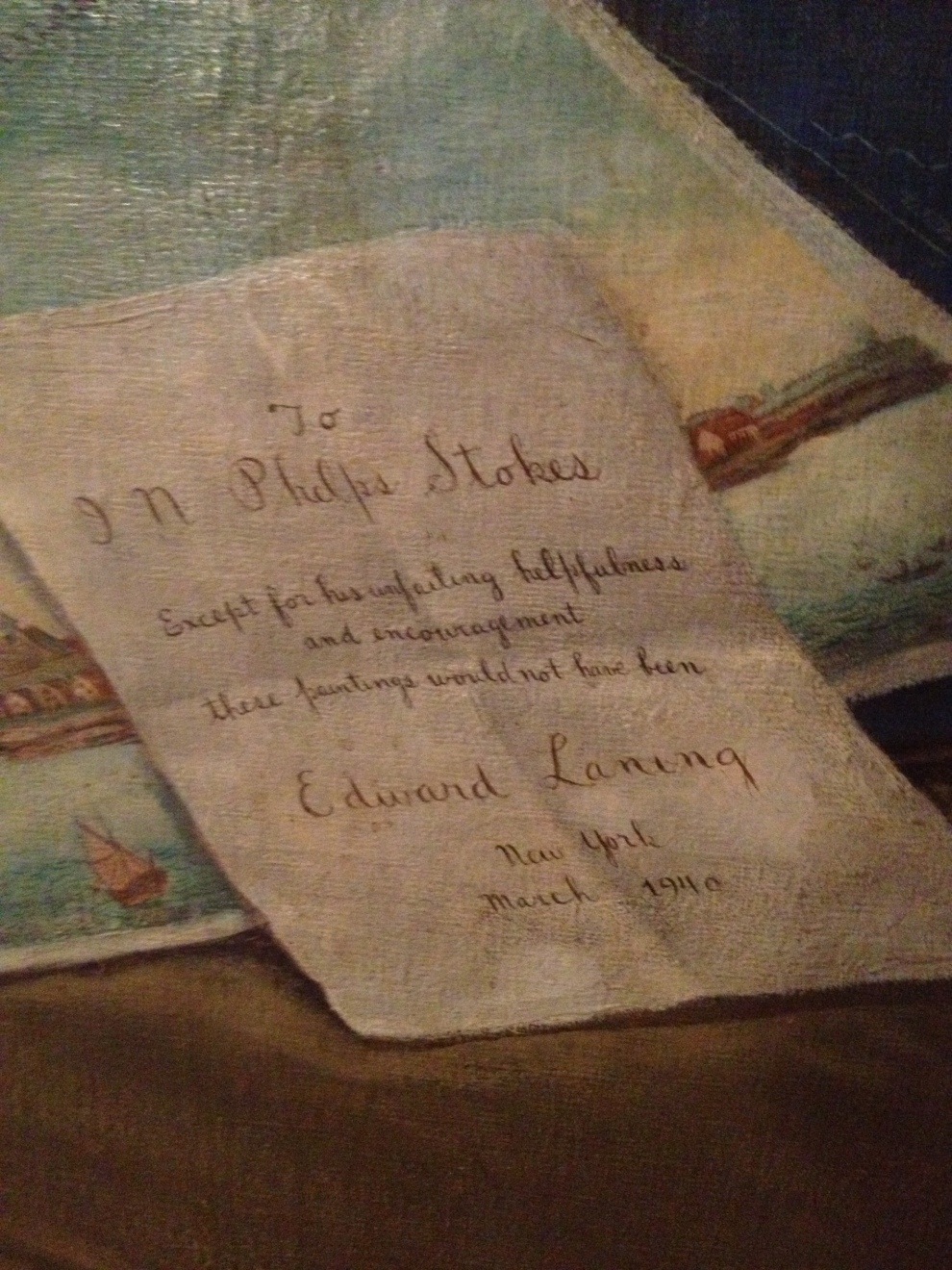 Stokes had gone from riches to rags by the time he died, but rather than leaving his extensive print collection to his heirs he gave it to the Library. He got a hallway named in his honor. He used to have his own private study just downstairs, Room 221, in a corridor that is now the purlieu of a handful of scholars and library officials. He was given his own digs just after the library opened in 1911, and I guess they didn’t have every bit of space stuffed with books at the point.

I like the corners of the library that people often walk by. The over-the-top water fountains. 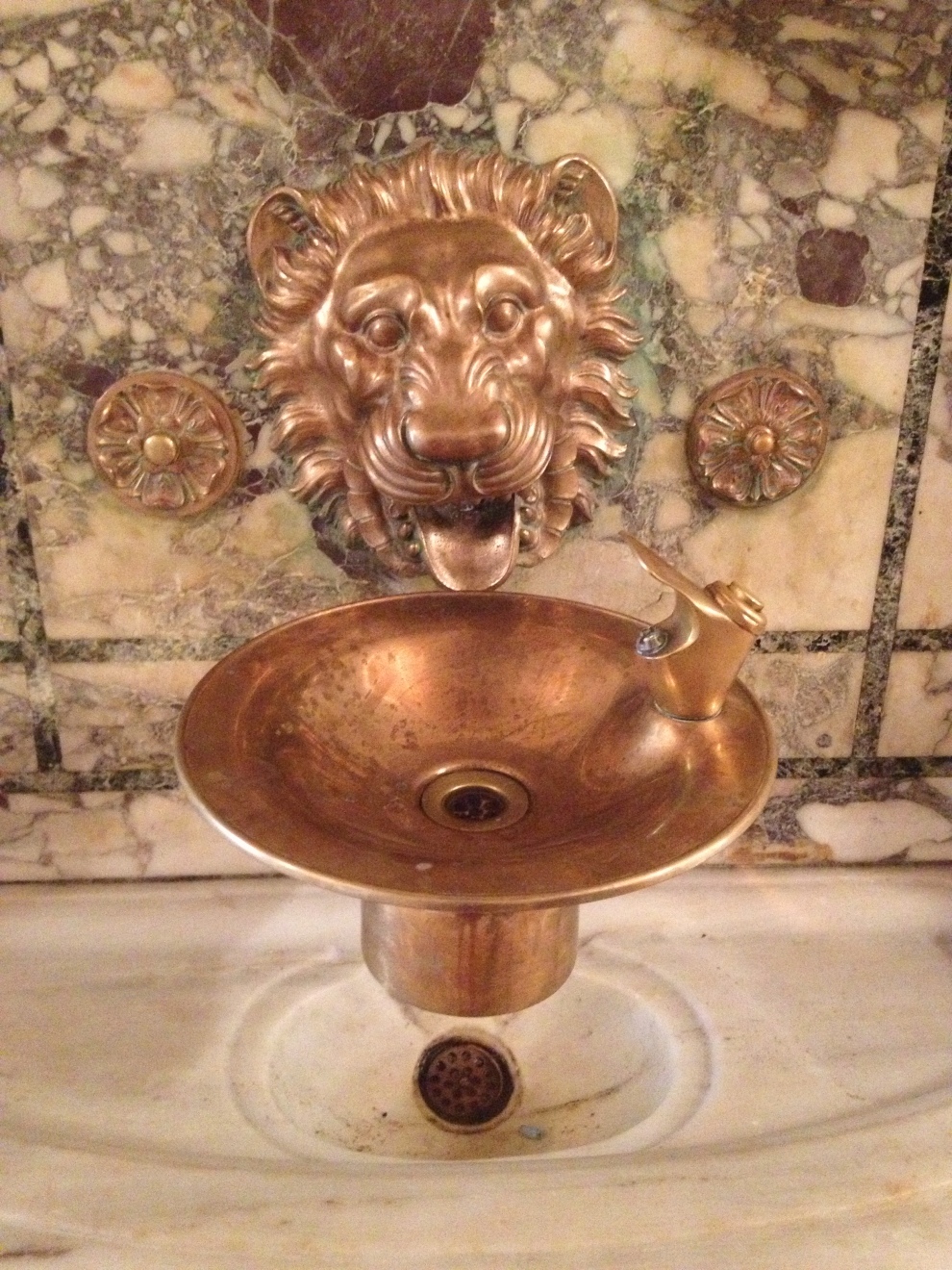 Crazy cleft-foot bases of the towering lamps when you enter the building. 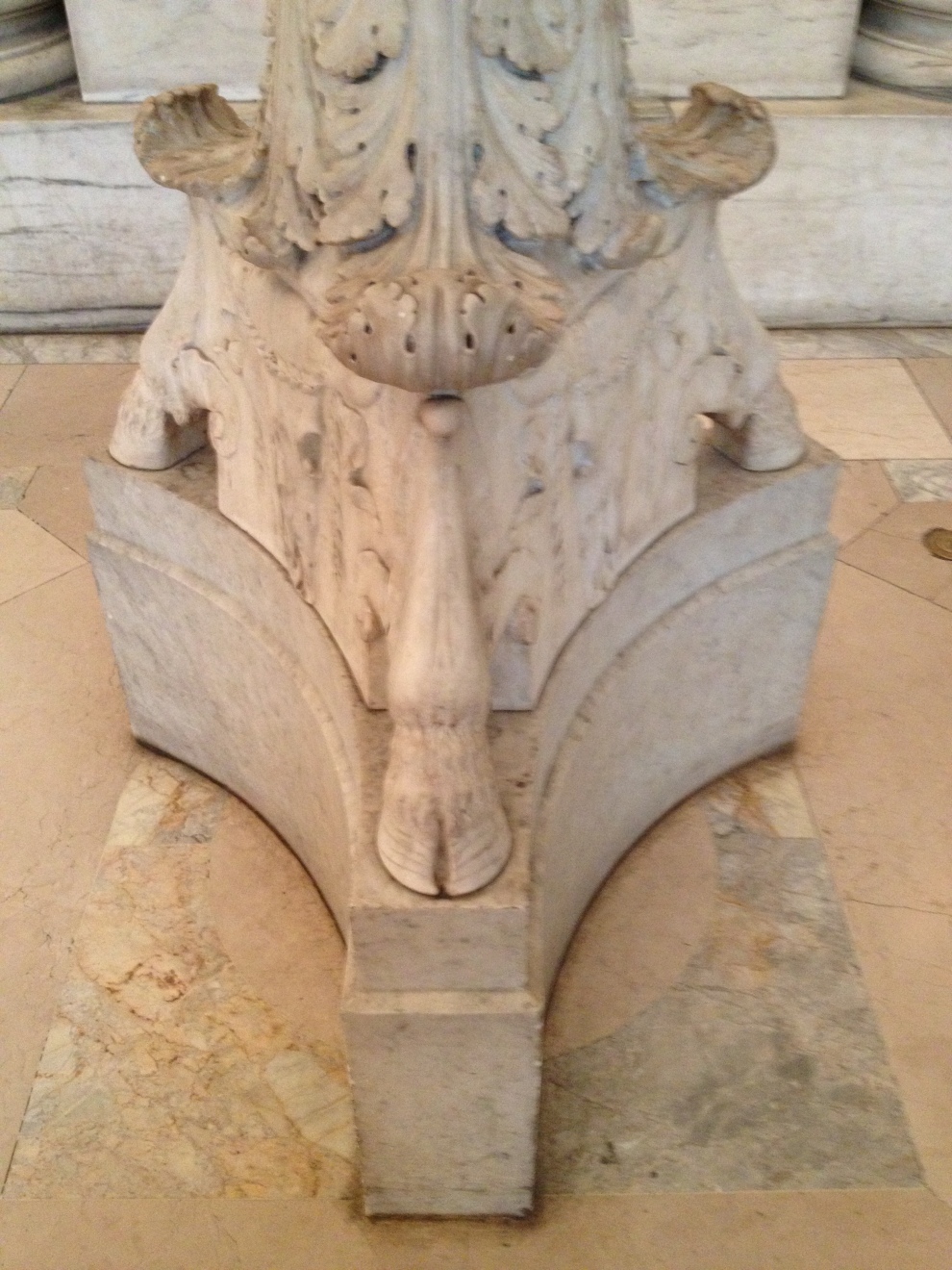 The old-fashioned polished-wood telephone booths, now derelict and lonely, where I spent long stretches of time goofing off, talking to various young men. Pretty soon they’ll be gone, too, no doubt. 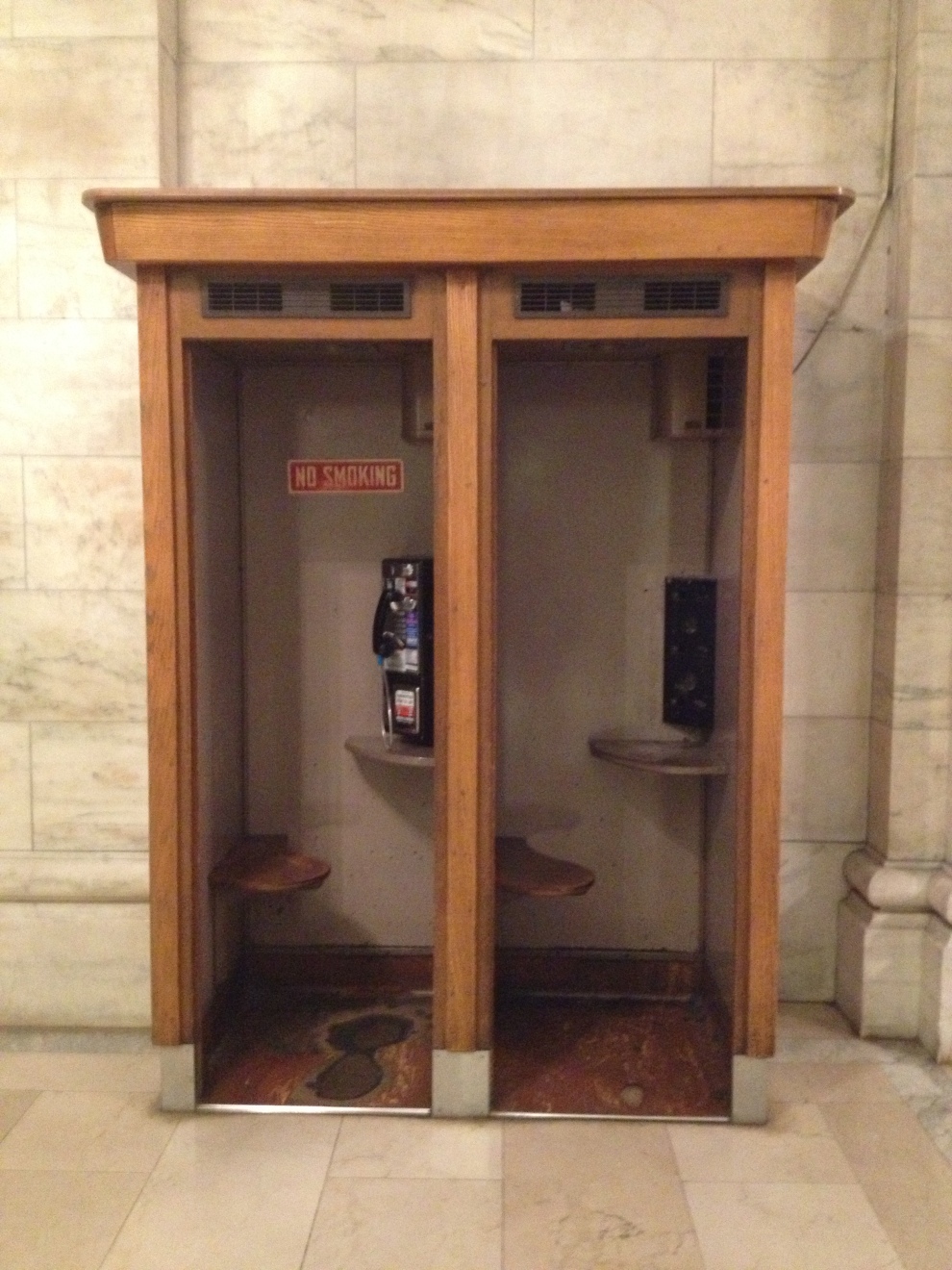 The numbered seats at the tables. 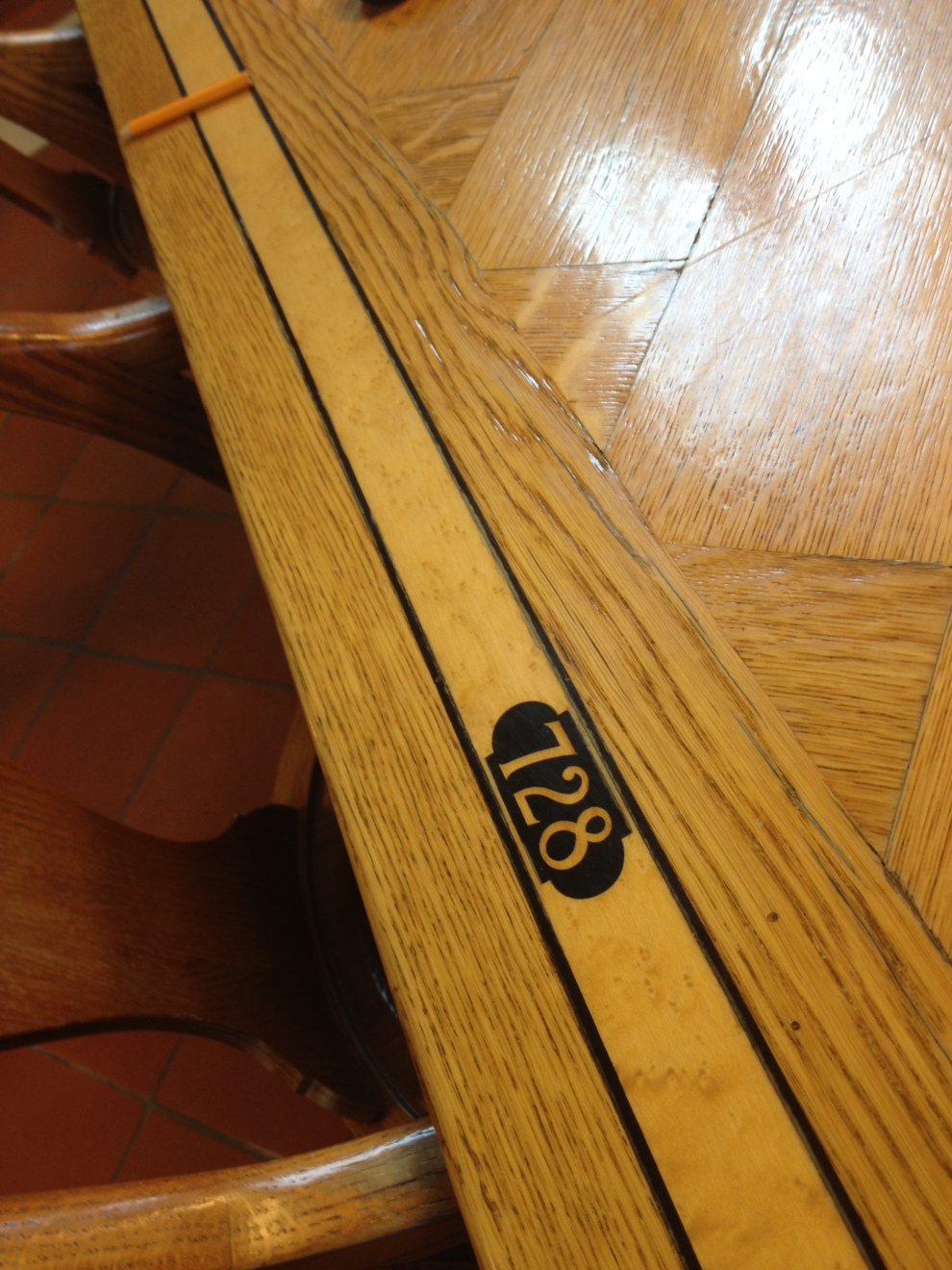 Maud, I say, this is how you tap into the vast resources of the library. The stacks go down seven floors – with 75 miles of shelving —  so you can’t just browse. The request process has changed, changed utterly since I started coming here in the late 70s as a college student. But some things remain oddly the same. The magnificent ceilings, with their azure skies and dreamy clouds. 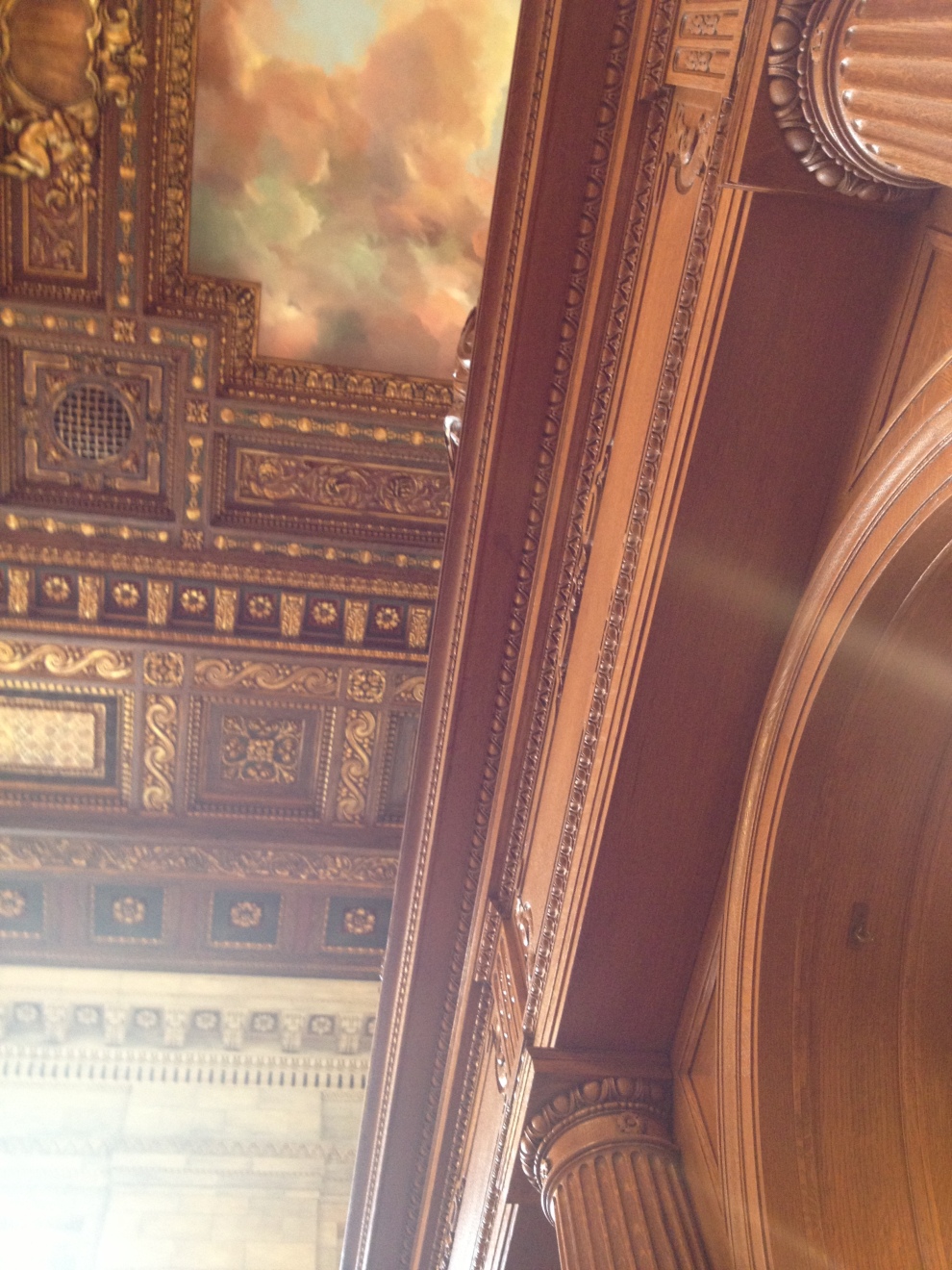 Bill Blass has given money to brand the catalog room, which is is funny considering the anti-fashion appearance of the people there. You get your call number from a computer but write it with the same old stubby pencils on request forms. 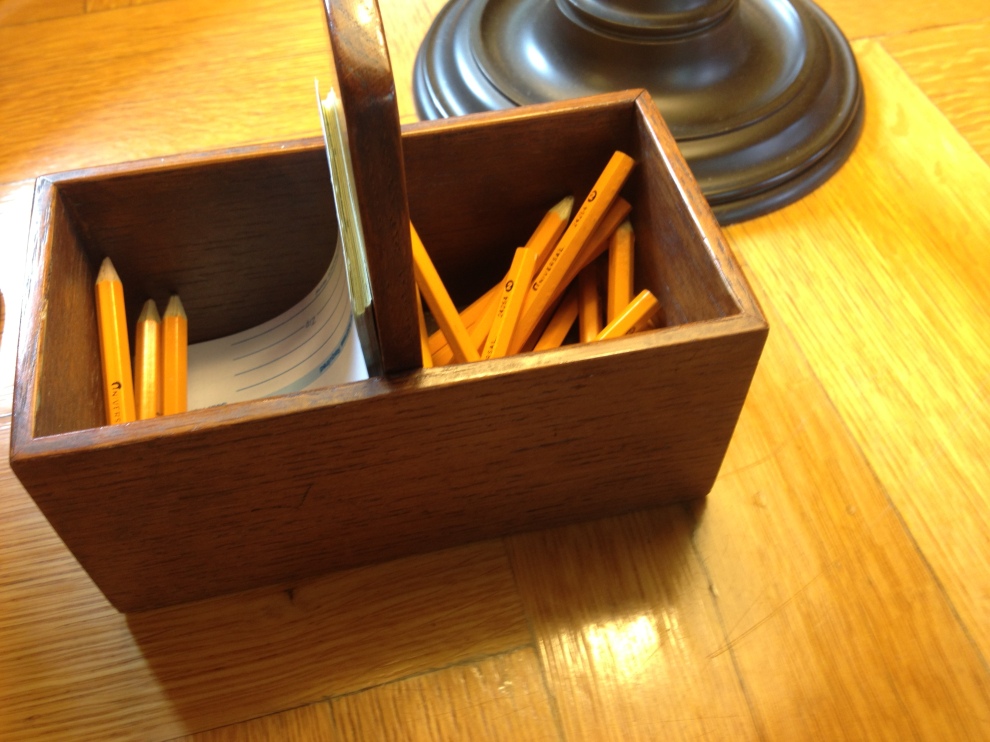 Once upon a time a person would send your request to the stacks in a pneumatic tube. Not any more. But the process is now even more paleolithic. 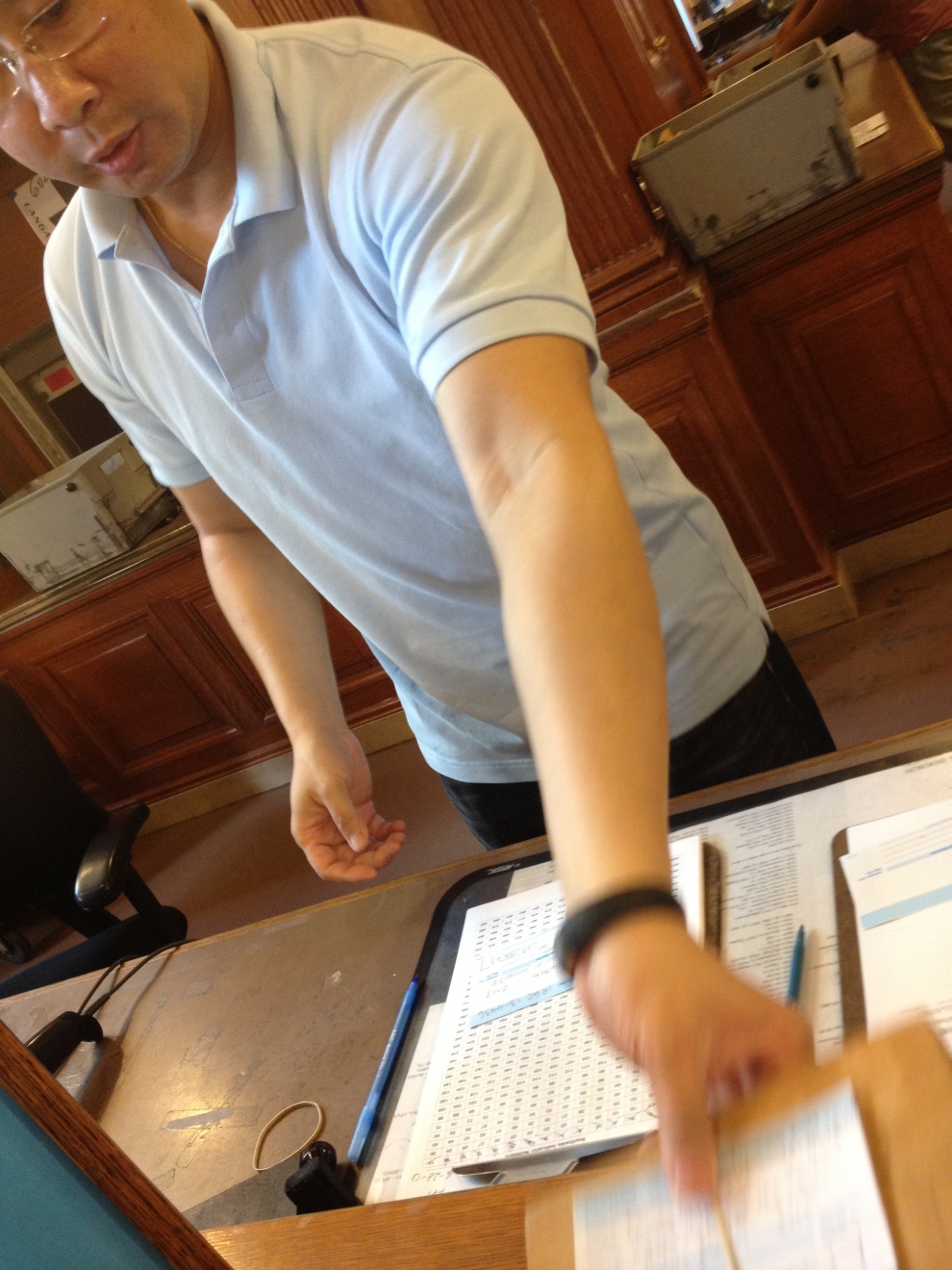 With your call slip bound by a rubber band to a block of wood and sent down by dumbwaiter from the reading room to the stacks.

The reading room itself never changes much, only gets spiffed up once in a while. I remember vividly being in college and consulting a volume on the life of Joan of Arc, bound in red cloth, plucked off the reference shelves along its southern end. The book’s still there.

Those were the days when Nat Sherman the tobacconist was located just across the street, and we’d snag samples of its rainbow-colored cigarettes before dropping in to the Library. Everyone’s got memories of a different-era – Gil’s are of the Adams cartoons in the hallway to the Library men’s john. 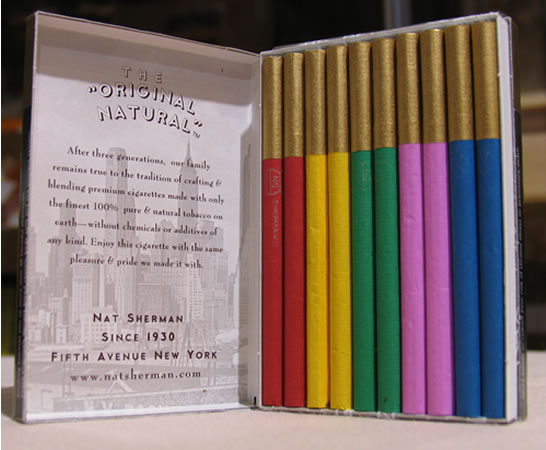 Those were the days of smoking. The mellow smell of tobacco lingers even today in the periodical reading room, a place where it used to be permissable to light up. Muralist Richard Haas’ large-scale paintings depict historic New York publishing institutions; I remember when those pictures went up in 1983. You can peruse a vintage copy of Vanity Fair while sitting beneath the Flat Iron Building. 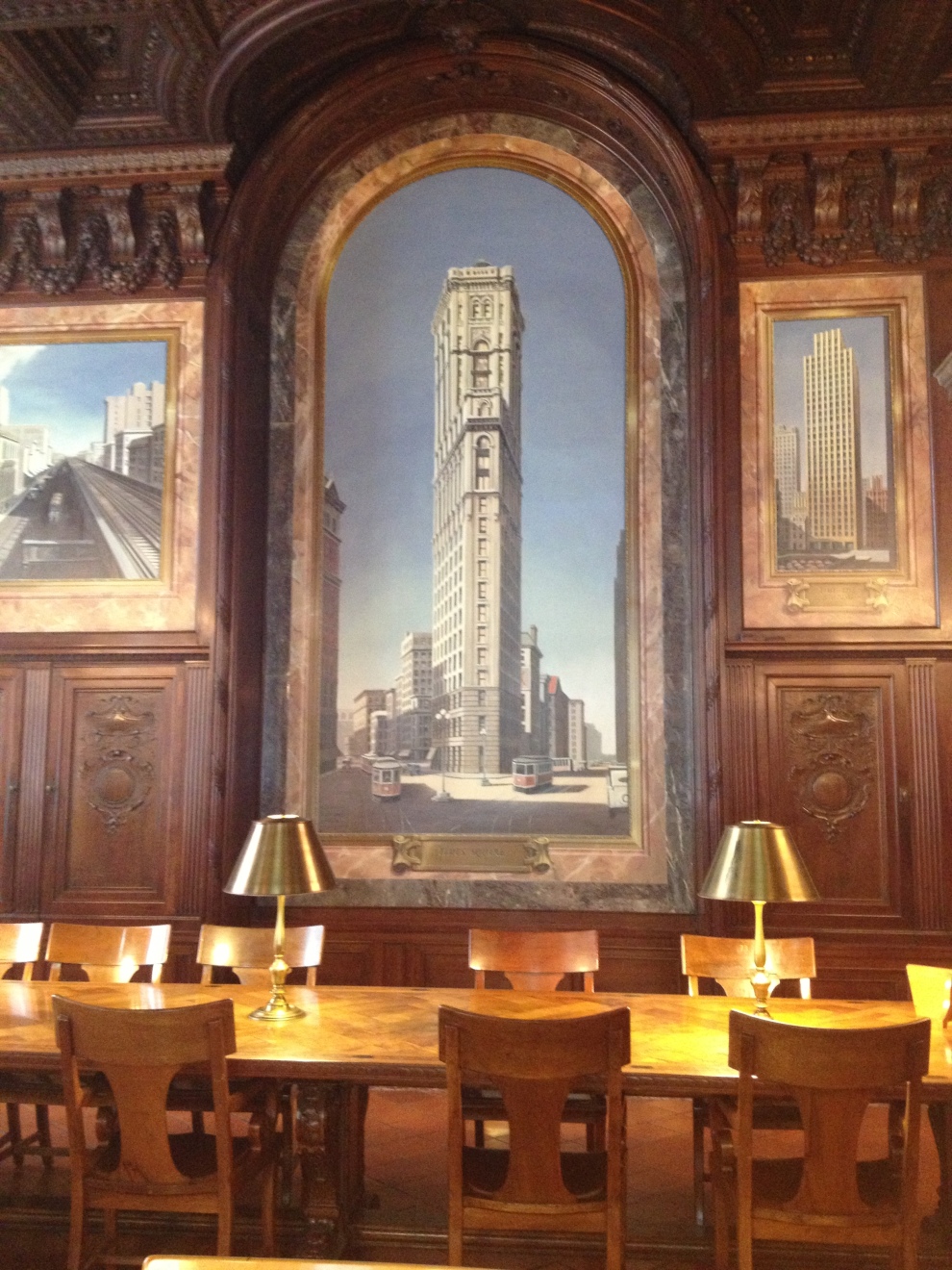 Smoking’s of the past, coffee’s the present. A café on the ground floor, near the entrance? Quel horreur! say the traditionalists. 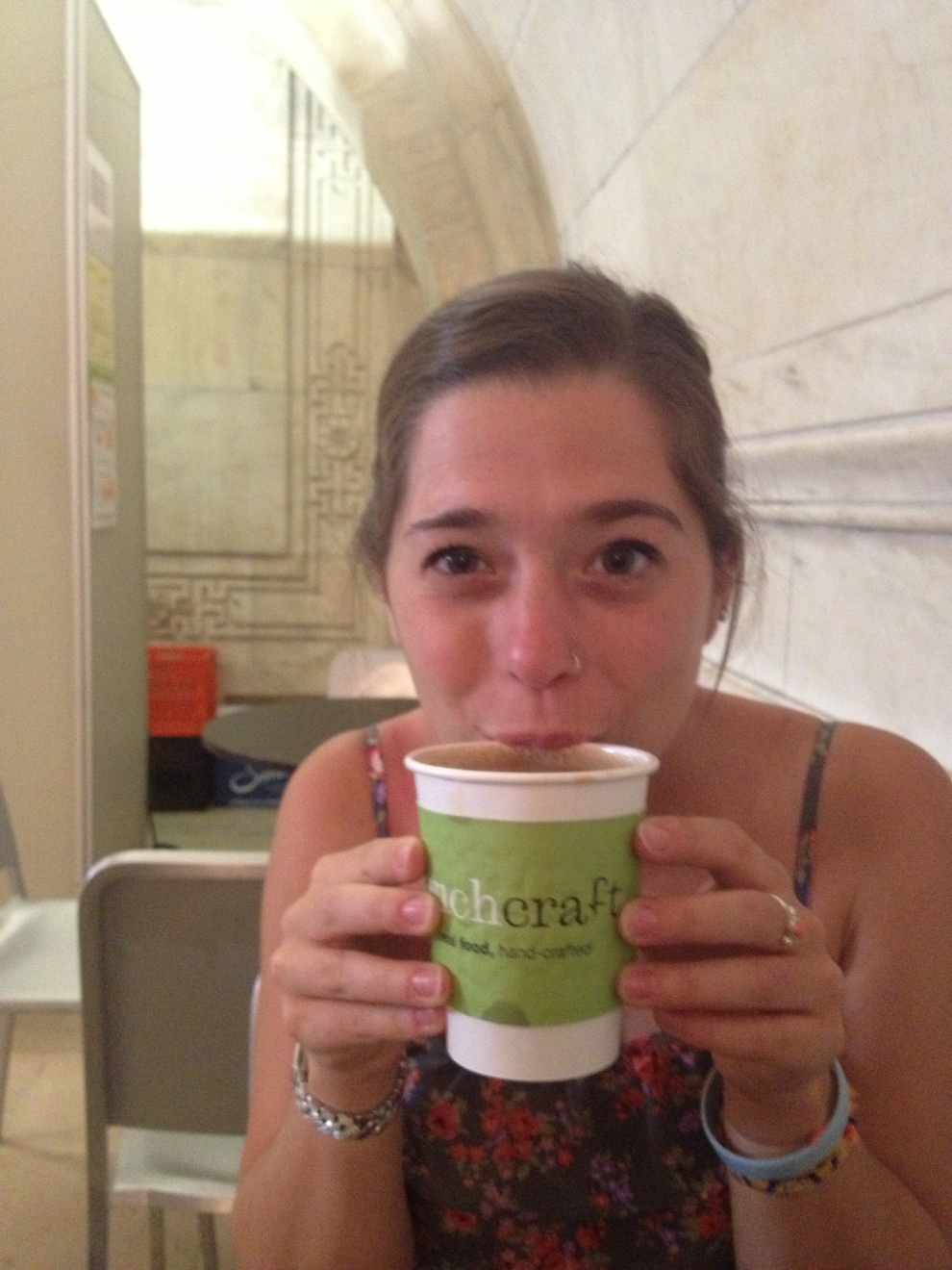 But it’s a very good thing when you’re a college kid coming off of a late summer night in the city.

When the Library was built by Carrere and Hastings, it was the largest marble structure that existed in the United States. The Vermont marble walls are three feet thick. The lions in front, sculpted by E. C. Potter, were named Patience (south) and Fortitude(north). That was in the 1930s, when Mayor Fiorella LaGuardia thought the citizens of New York would need these qualities to get through the Great Depression. They’ve seen their share of weather, such as this storm in the ’40s. 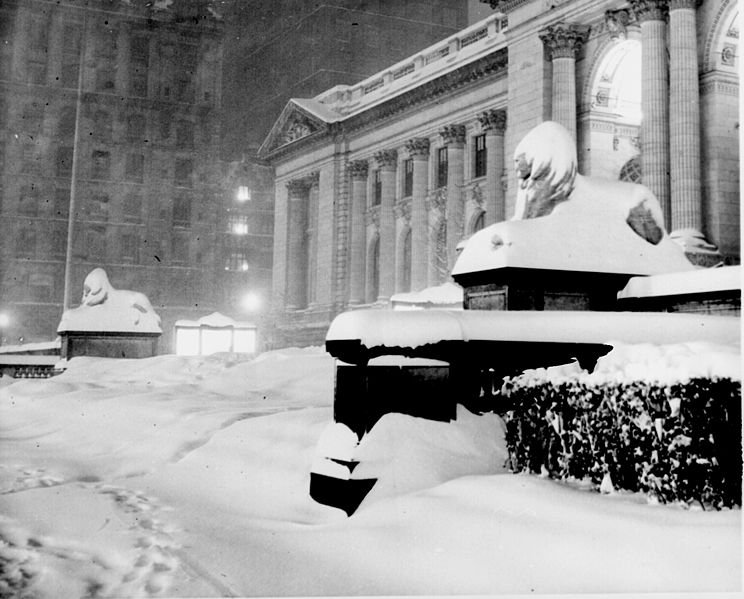 I’ve never thought about those names much, but they certainly also bespeak the traits that were needed to assemble this majestic pile. As they do the writers and researchers who find bliss and all the “good Bookes” they could ever want within its marble halls. 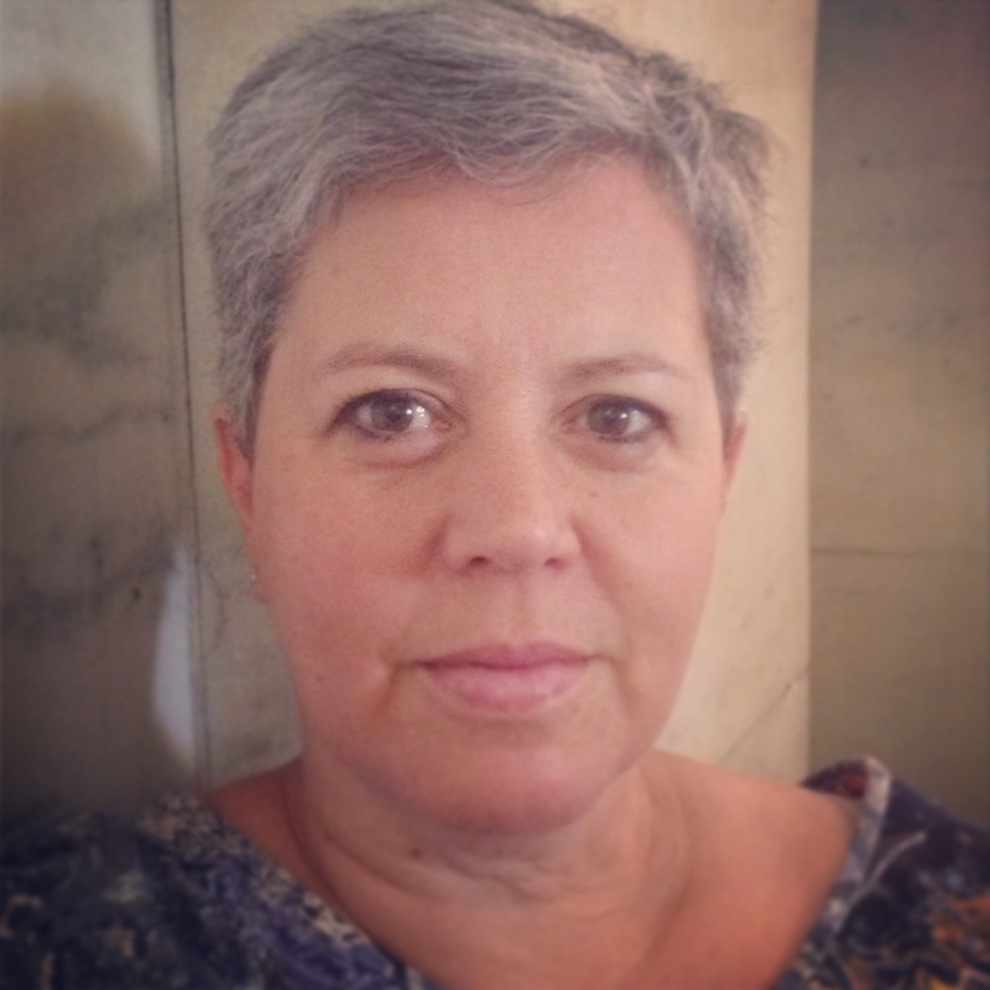 3 responses to “My Private Public Library”