A Farm Grows in Brooklyn 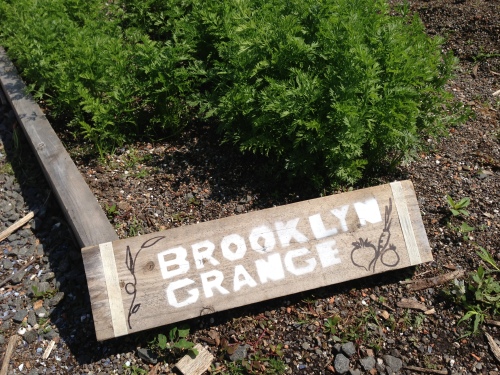 We had to find our way through a coffeehouse and the winding corridor of a building before getting to the unmarked elevator that led to the roof. Then we knew we had hit pay dirt, so to speak.

Brooklyn Grange is the largest rooftop farm in the country and perhaps the world. Sited atop a building that originated as a furniture factory, it has the space to produce at least three dozen different vegetables and herbs in the course of a season. You would never know it’s there, looking up from Northern Boulevard, a car-choked  thoroughfare that muscles its way through Queens, New York.

We were a little early. The volunteers were still bagging up the greens for the CSA as Gwen, a busy farm worker, applied sunscreen to her arms. This is great weather for kale, said Gwen. All the rain makes it really spring up. The farm stand also displayed beautifully fresh carrots, mesclun, scallions.

A farm on a roof has to have all the things a farm has on the ground. Worms.

The farm manager, Bradley, wearing a bright green tee shirt whose back was emblazoned with the words, “This is what a feminist looks like,” told me a little about the chickens. 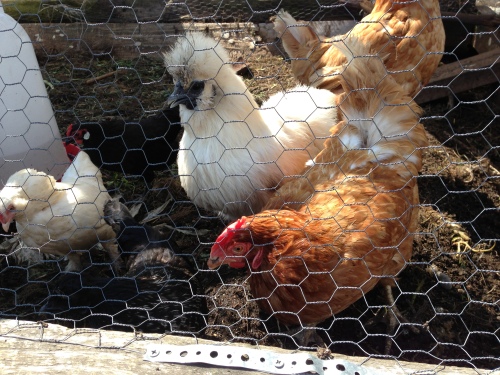 The dramatic white one, he said, was a Japanese silky. I asked him about the manure, so great for vegetables. They have about a dozen birds. They give what they can, said Bradley. He directed the volunteers out among the rows to harvest thyme and flowers. Tourists and photographers were beginning to show up, most with the kind of equipment that views like the Farm’s deserve. This one, taken on another day, is by a photographer named Cyrus Dowlatshahi. 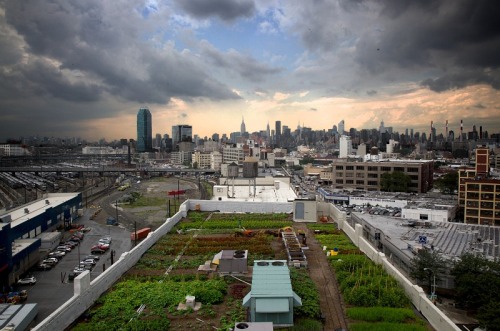 You feel you could leap the distance from the pepper plants to the Empire State Building in one stride – or at least that Philip Petit could make a project of the crossing.

Photographer Rob Stephenson has made some striking pictures of New York’s farms and gardens.

Not just rooftops but the kind of small, intimate plots that can in found in Harlem and the Bronx, and nurture peoples’ souls as well as their stomachs.

Close up at Brooklyn Grange you can see the serious thought behind the endeavor.

The rows of stakes waiting for the tomato’s slow and steady climb.

There are roughly 1.2 million pounds of soil in this one-acre plot.  Could the concrete slab roof  give way? Absolutely not. All these details and more are readily available on line.

You can book an event at the rooftop, even a wedding. Perhaps guests could weed between glasses of champagne.

Brooklyn Grange is joined by other urban farms in New York: Added Value, Tenth Acre Farms, Battery Urban Farm, Gotham Greens and and Eagle Farm are just a few of these enterprises. One researcher was quoted in The New York Times last year: “In terms of rooftop commercial agriculture, New York is definitely a leader at this moment.”

There is a long history of agriculture in the boroughs of Brooklyn and Queens. 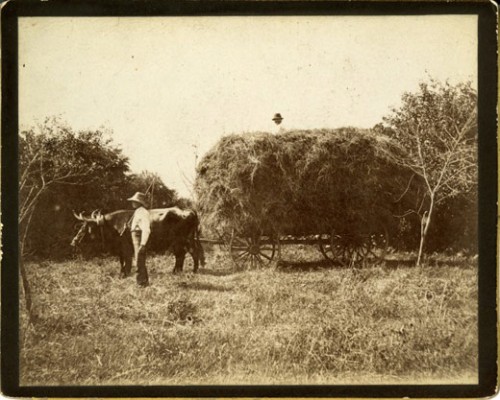 According toRobin Shulman in her lively and informative book Eat the City: A Tale of the Fishers, Foragers, Butchers, Farmers, Poultry Minders, Sugar Refiners, Cane Cutters, Beekeepers, Winemakers, and Brewers Who Built New York, “As late as 1880, Brooklyn and Queens were the two biggest vegetable-producing counties in the entire country.” She cites one observer as saying, “The finest farmlands in America, in full view of the Atlantic Ocean.” Farmers in the boroughs used the manure of city horses to fertilize their crops, which they brought to the Manhattan market by boat.

I’m thinking about farming as I coax my tiny vegetable plot to maturity. My new strawberries have come in.

And some tomatos, the size and texture of an Atomic Fireball – remember those? – though not the color, yet.

But I’m tired of all this just looking at good stuff growing. Where’s the table in the fashionable farm-to-table equation?

One was set for us at The Farm on Adderley, in the neighborhood of Ditmas Park, Brooklyn. There is nothing like a restaurant with a mission statement: it “has evolved to pursue the principles of supporting local farmers, artisans, entrepreneurs as much as possible, making delicious food from that, and serving it in a completely honest way.”

You can get a list of the local farmers who provide the kitchen’s ingredients. But that doesn’t mean anything to me unless I get a plate of food that’s good – as was my red flannel hash, its corned beef colored deeply with beets, and an even deeper burgundy horseradish served alongside. Did it taste better because the beef that was corned had roamed freely? Yes, I believe it did.

The hostess brought to mind a farm girl in her friendliness, and she seated us in the garden, between a towering fir tree and a luxuriant grape vine, next to a wooden crate planted with chard and mint. The sun shone down, and we could have been out in the country. The place hosts events, like a New Amsterdam dinner “curated” by food historian Sarah Lohman, who is an educator at the Lower East Side Tenement Museum and author of a blog called Four Pounds Flour, devoted to “historic gastronomy,”

We were lost in the perfectly crisp, chewy, salty french fries, served with a sultry curry dip.

Couldn’t help, though, but overhear the young couple next to us planning their nuptials. Should we let them know about Brooklyn Grange? There could be worse places to grow your relationship. 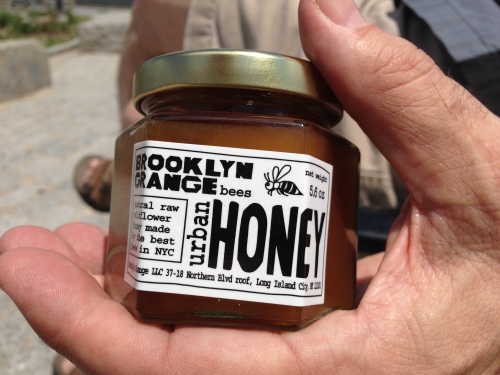 4 responses to “A Farm Grows in Brooklyn”