Strangers on a Carousel

I get to see the carousel horses at Binghamton.

The Triple Cities, actually — Johnson City, Endicott and Binghamton. A part of the world that strikes me as sort of a blank, a cipher.

Some houses crumble and gape, seemingly lost in time. 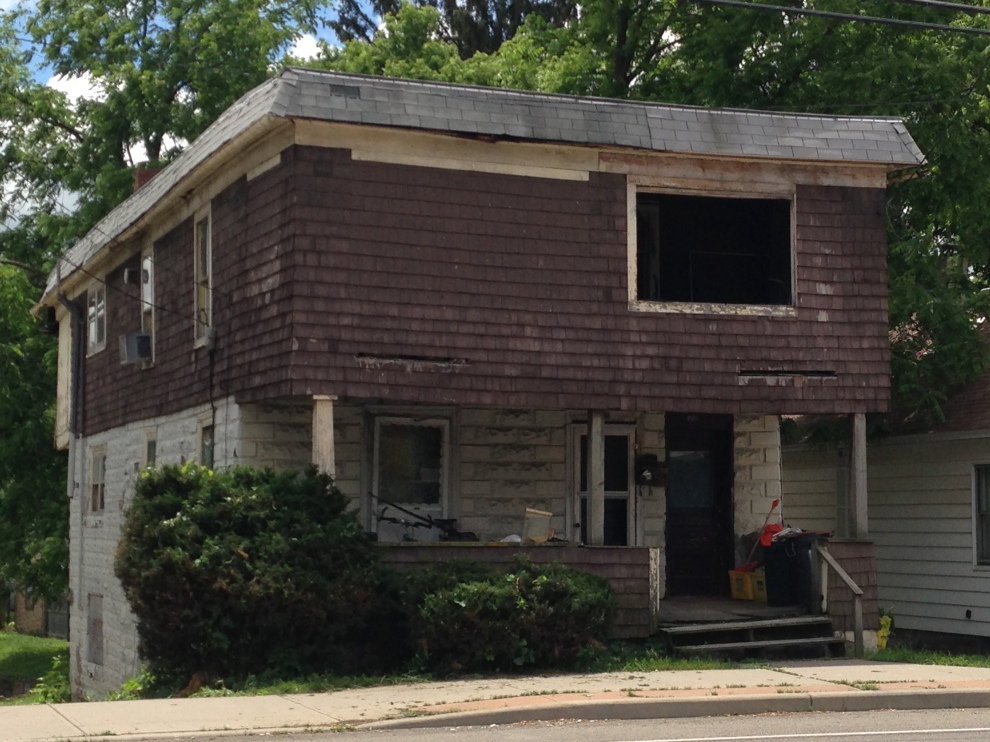 Others are spruced up as garishly as 42nd Street tarts. 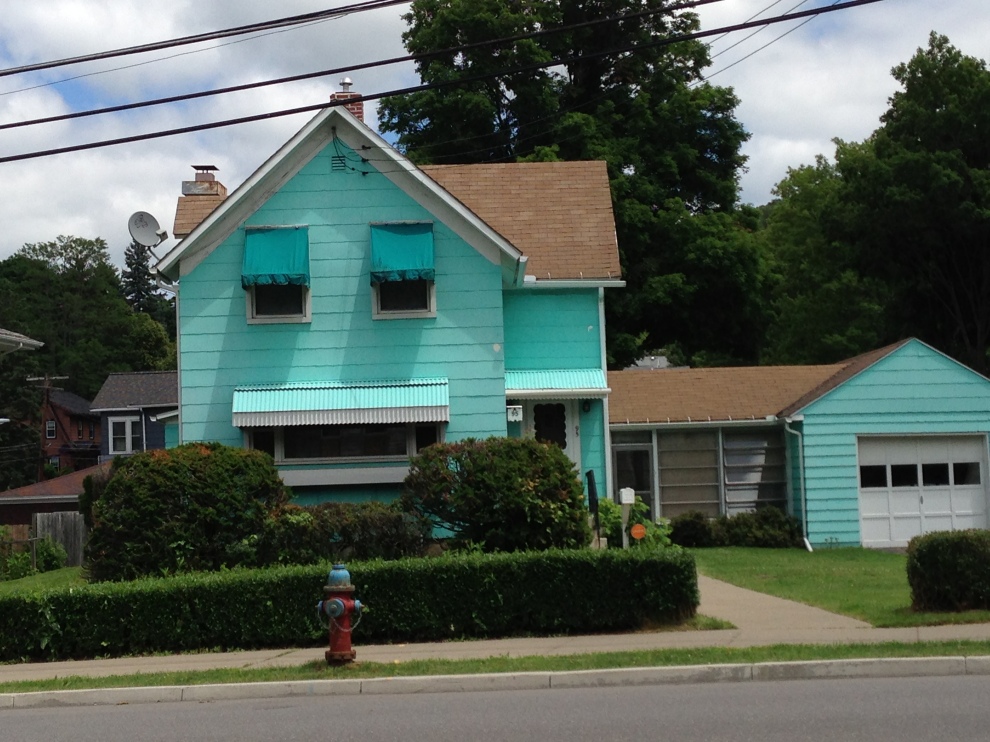 Of course, some of this decrepitude I love. A weatherbeaten sign with “international” flair. 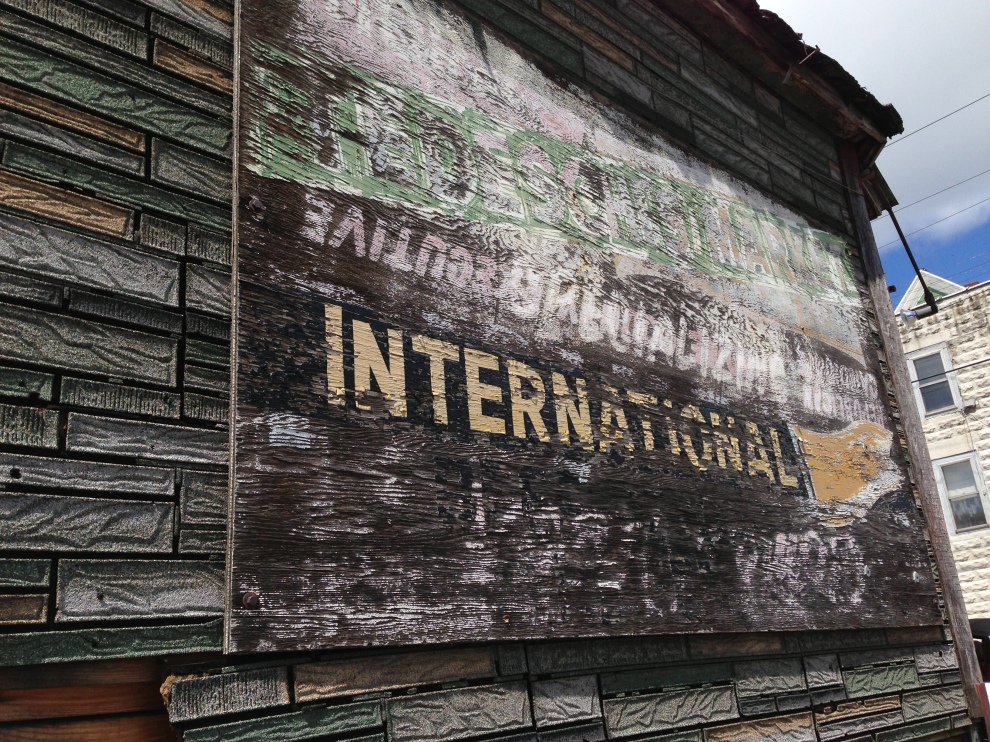 A space-age car dealership with weeds sprouting up. 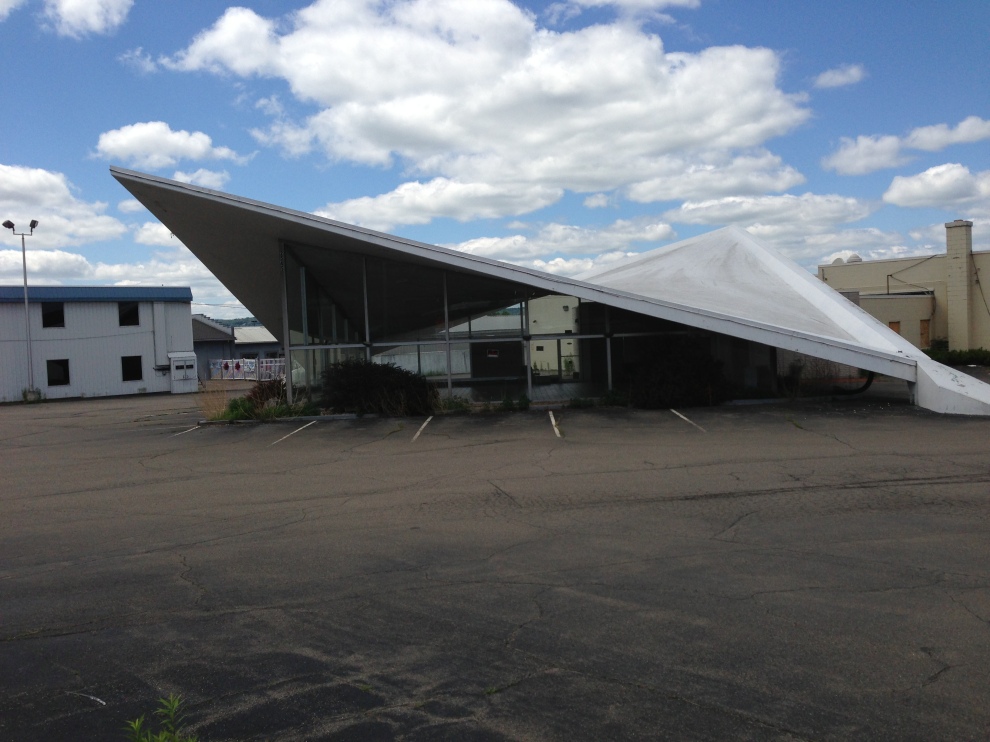 All thoughts of the crumbling present go away when we visit four of the six  heirloom merry-go-rounds that still grace the Binghamton area (out of 150 in North America). The first one was installed in 1920, and sits next to a  little zoo — you see and smell a big black pig in its pen as you go ’round. The Ross Park carousel is completely unadvertised, a secret gem known to only a few, reached via a flower-bordered path. The horses, “jumpers,” as they’re called, are a little tattered. 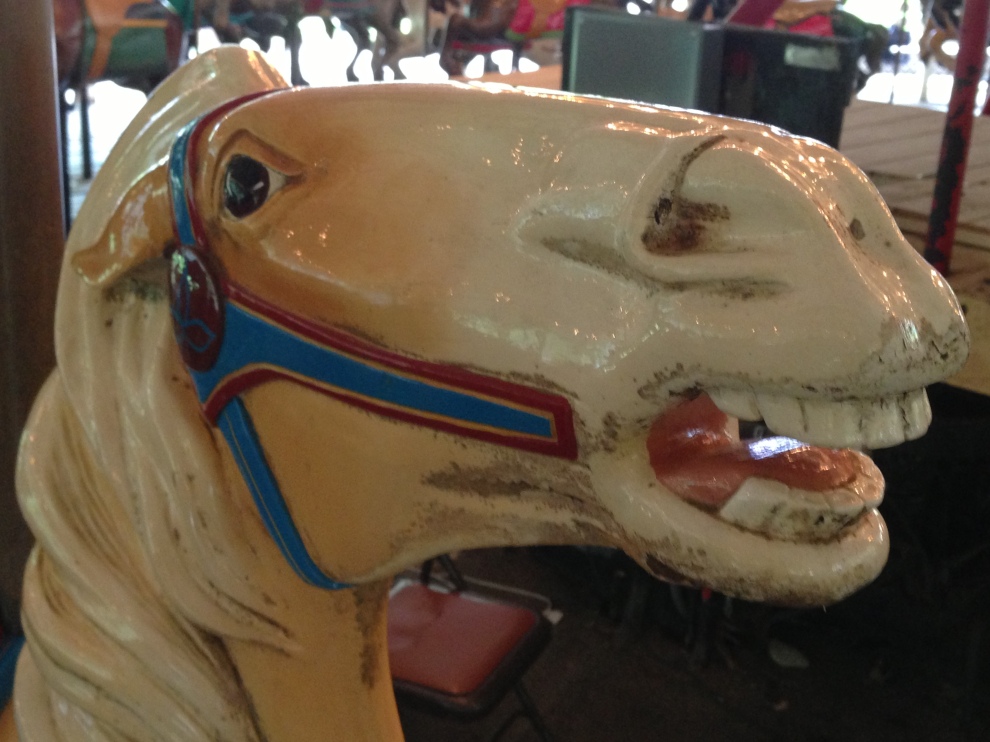 Gently worn. Still, the original 51-key Wurlitzer Military Band Organ sends you around, and the chariots are flanked by a bathing beauty and an ape, which we sit next to for the whole ride, not noticing its dramatic visage until we rise, slightly rocky, to our feet. 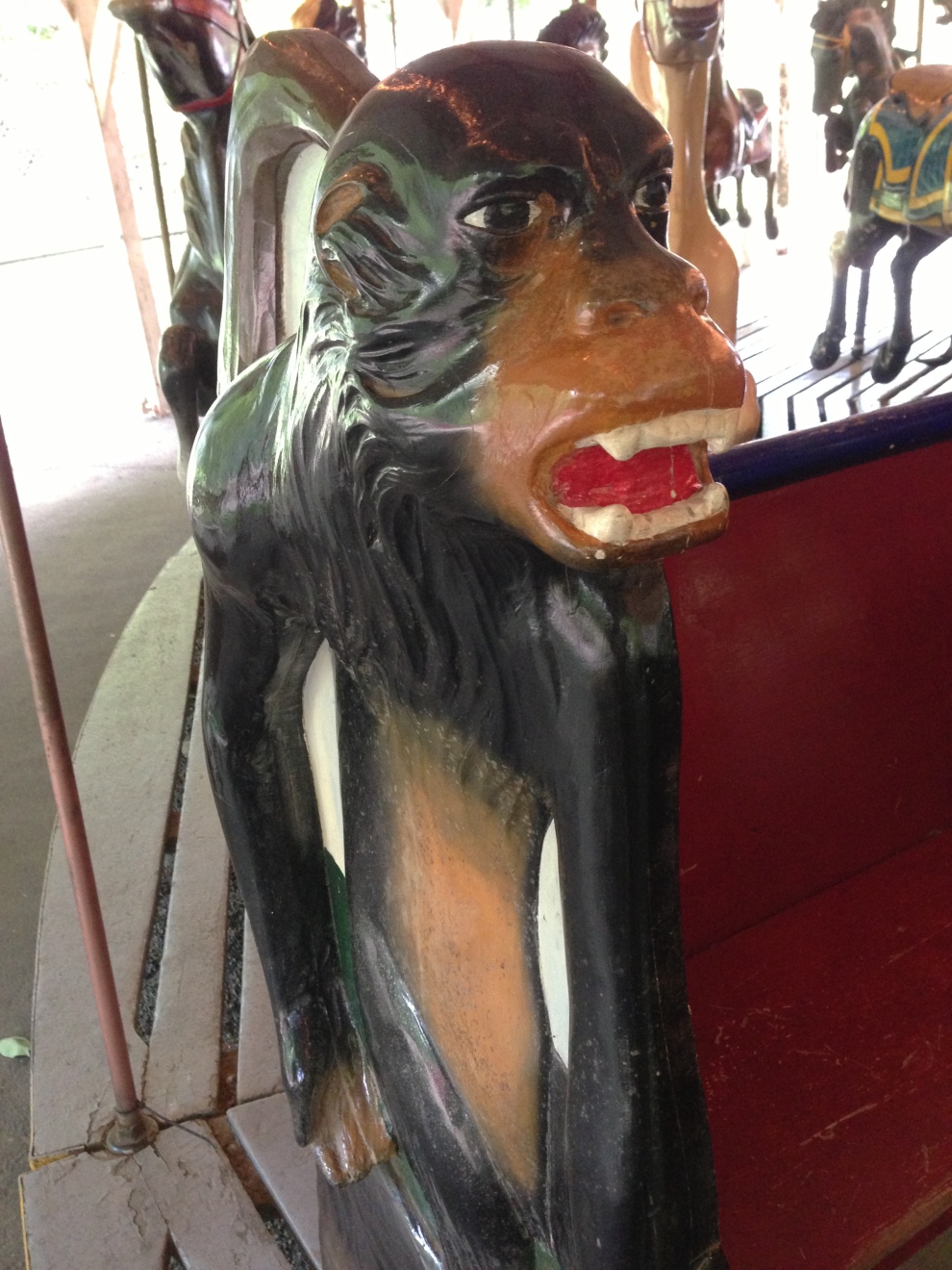 A young Tobey-Maguire-in-a-shaved-head-role lookalike blows a whistle, the carousel comes to a halt and we jump off.

The richest men of the city, the Johnson men, funded these spectacular rides of hand-carved wood, made by the Allan Herschell Companies of North Tonawanda, New York. You can visit them all in a day if you get there at the right times, as we do, fueled by a long set of Captain Beefheart on the university radio station. Another of the carousels, in Endicott’s Little Italy, projects a more demure ambiance. It’s housed conveniently next to both a swimming pool (“No Wet Clothing Allowed”) and a window for home-made frozen custard, where a girl is in the middle of changing out the Holy Cannoli for the Watermelon on the flavor board when we arrive.

Care has been taken to preserve and restore the beasts over the years. They are pretty, high-stepping it around the ring. Once upon a time you had to pay admission — a piece of litter! — to get a ride. Now it’s free to all and you can leave your trash in the can where it belongs.

Suddenly, the pavilion gets very quiet. All the kids vamoosed. Is there anything spookier than a silent carousel, especially one that will be 80 years old next year? Then again, calliope music can seem manic, even deranged, and the whole atmosphere fraught — see Strangers on a Train, when the whole ride flies off its axis.

And the horses go around and around, around and around. In Savage Girl I tell the tale of New York’s Central Park carousel, which once upon a time was drawn in its circle by mules trudging in a basement beneath the platform. True story.

Another carousel, this one at “the Rec”, one of the area’s most used parks,  unexpectedly has a series of rounding boards which feature scenes from Rod Serling’s Twilight Zone. They were painted by artist Cortlandt Hull during a refurbishing in 2011. 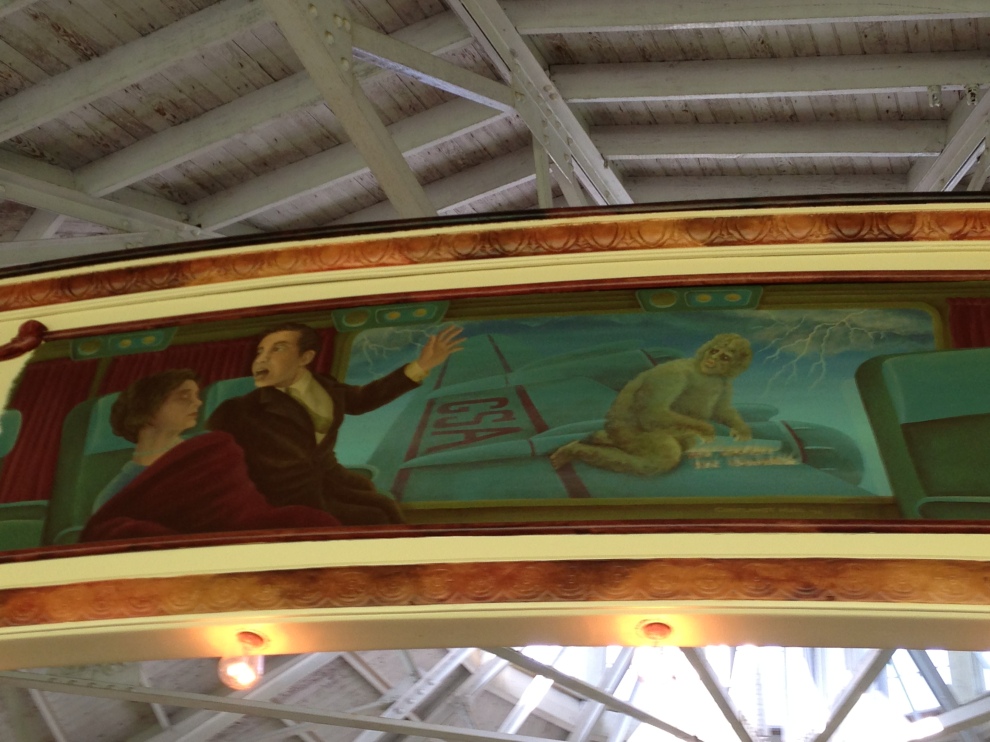 The carousel came to Recreation Park in 1925, well before the TV series, but Serling grew up in Binghamton riding the carousel, so it all makes sense. There’s even a picture of the carousel itself– a scene from the show or a fictive portrait of Serling in his old stomping grounds?

Endicott-Johnson, the company that earned fortunes for the family that built these beauties, was so big, it made every pair of boots that outfitted American soldiers in world war one. George F. Johnson, the company’s big daddy, in 1916 mandated a 40-hour-work week. Generous, for the time. So was giving his 24,000 workers carousels.

Jack Dougherty, ready with his whistle on a lanyard, told me that they have to be careful at the Rec, closing it up when some rowdy middle schoolers come raging around every afternoon.

Can’t risk damage to the jumpers. The detail is really exquisite. 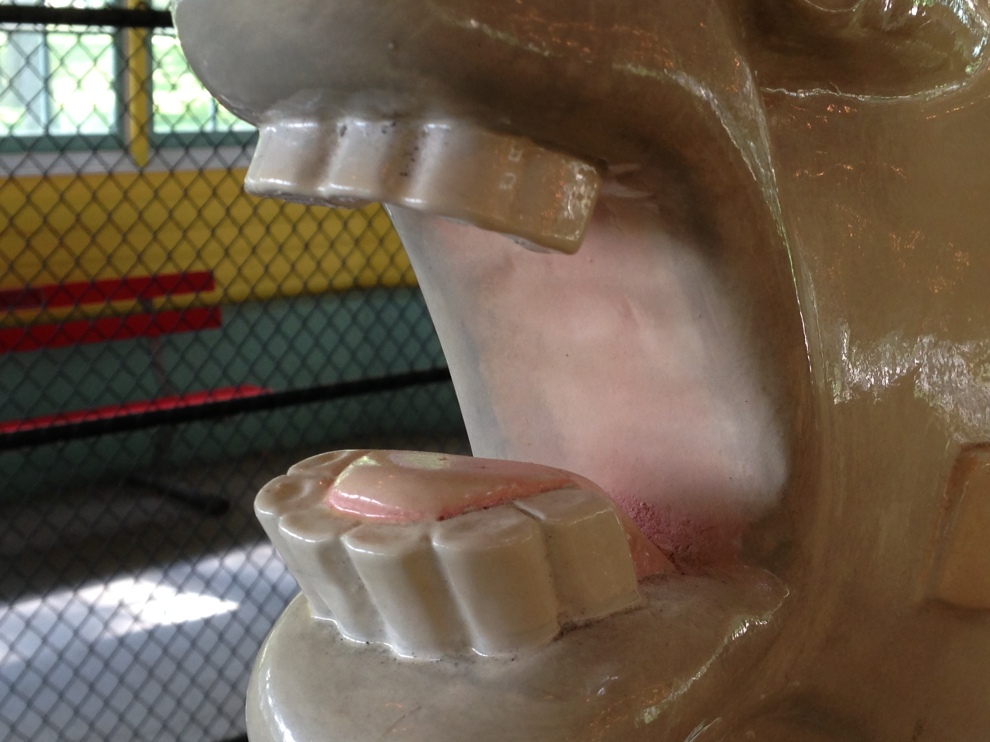 They seem much more sturdy than they are. They’re real/not real.

I wonder if the children of the Triple Cities are somehow happier because of all the carousels in their midst? On the day his namesake merry-go-round opened in 1934, more than 500 neighborhood children paraded to George W. Johnson’s house with a bouquet of flowers to show their gratitude. 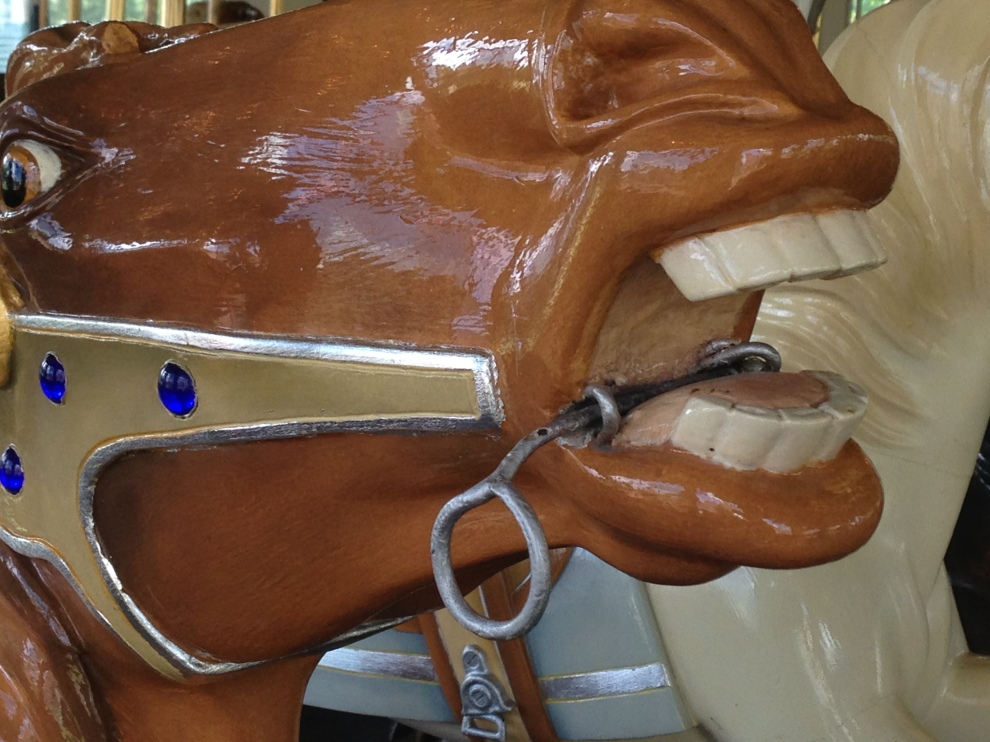 Made by human hands, each of them, so brawny and so delicate.

5 responses to “Strangers on a Carousel”