Monsters in the Garden

I had been looking for days for an infant saguaro, knowing that they began tiny, nested under bigger, more mature, spreading nurse plants like mesquite trees. Not a one.

I found other babies.

But not those of the saguaro. It was almost as if the giant cactii sprang full grown from the body of the earth. But I was determined. At the Desert Botanical Garden in Phoenix, I buttonholed a gardener who looked like a dashing, red-scarfed gent I once knew named Jorge. 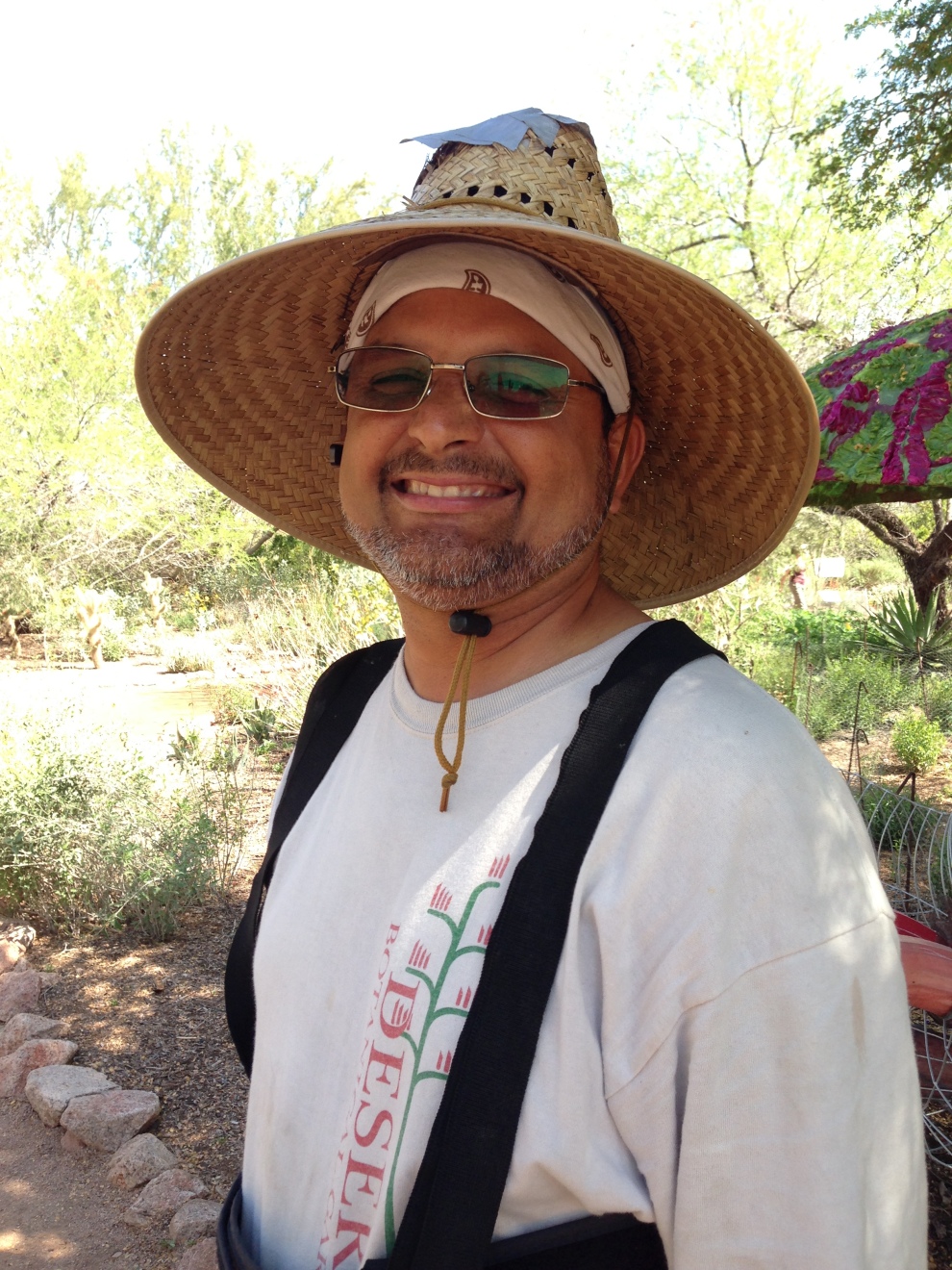 He had silver duct tape holding together the crown of his straw hat,and when I first saw him he was supervising the planting of a smallish saguaro in a bed near the parking lot. In replanting, says my mother, you need to position them so that they face in precisely the same direction they did in the first part of their lives, or else they wither and die. Saguaros have to have the same relationship to the sun, always.

I knew this gardener knew saguaros. Could he point me in the direction of a baby? I asked. He led me through the winding walkways of the Garden. I wanted to find one that was no more than a nub growing out of the ground, just starting out. Jorge seemed to know exactly where it was.

We went through the grove of barrel cactus with its yellow fruit. 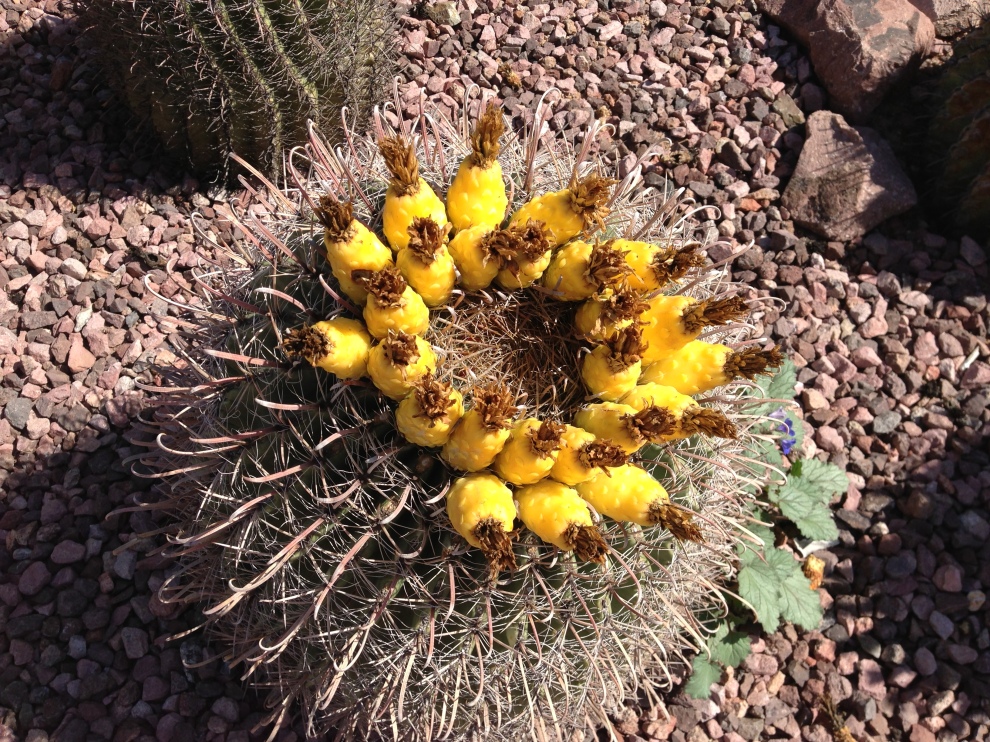 Past the blushing prickly pear.

Past the half-hidden nest of an absent bird. 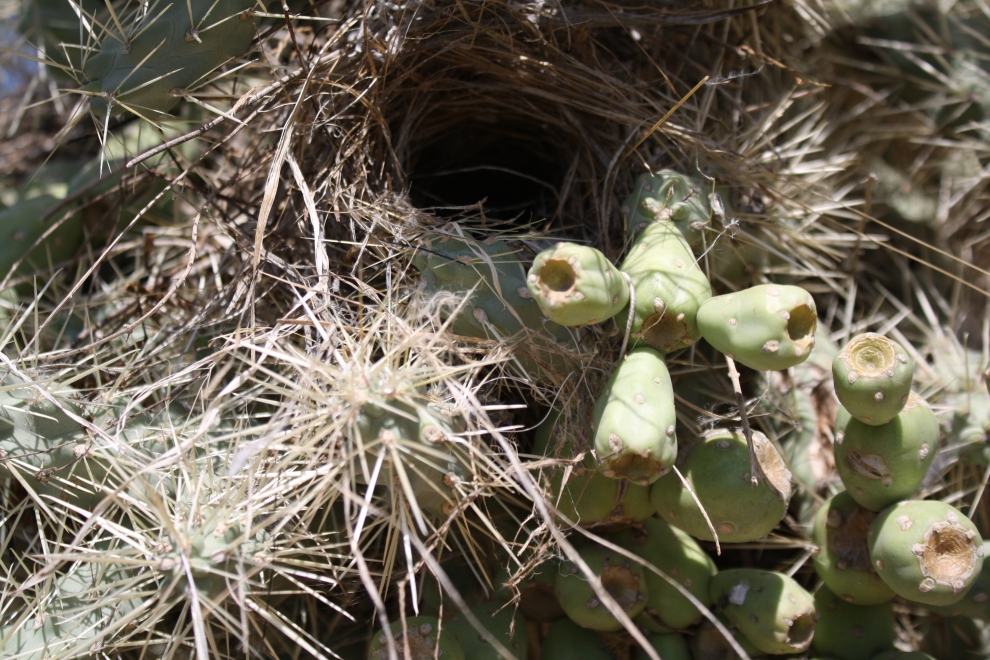 There it is, Jorge said. He pointed beneath a sheltering shrub, which protected the saguaro like a baby Jesus in a creche.

Not quite an infant, he said. About five years old. It would take ten years to grow that big in the wild, he added with a touch of  pride. The Garden waters their plants so assiduously that they shoot up tall and bright, a technicolor green compared with the black and white of the desert that stretches all around.

Now that I had found my toddler saguaro, I could pay attention to the other fascinations of the Garden. An ebony-colored wood beetle chased us down the path, buzzing furiously. Art was everywhere.

This piece, of course, suggests the Renaissance produce painter Arcimboldo.

And Jeff Koons in his puppy flower phase.

My eyes were dazzled with not only organic but plenty of nonorganic growth, furnished by major sculptors.

The soft green and hard metal played off each other.

No, said my mother, I don’t like it. She was looking up at the Dale Chihuly forest of glass that welcome visitors to the place. It’s gilding the lily, she said.

I liked all that green glass. But maybe because the work was, first of all, monstrous, as were so many of the large-scale works scattered about.

Secondly, I was acquainted with Chihuly back in the early ’80s, when I visited his Pilchuck hot shop outside Seattle as a lowly member of a film production team, about the time he returned from the East Coast and blew up into a  legend. I was impressed with his pirate demeanor. And also with my experience of blowing a little glass, anything but monstrous, assisted by another dashing fellow, a tall long-haired Chihuly-ite gaffer who stood behind me and steadied my hands on the pipe. I thought that the keepsake I created would be mine forever. The thick-walled cup I made held exactly the right amount of vodka on the rocks, before it fell and smashed at about the same time I quit drinking a decade or so ago.

But maybe the natural vegetation was extreme enough. Lipstick cactus.

Some specimens remained from the opening of the garden more than 70 years ago.

We had to go see how the butterflies responded, now that springtime had revealed its face to Arizona. 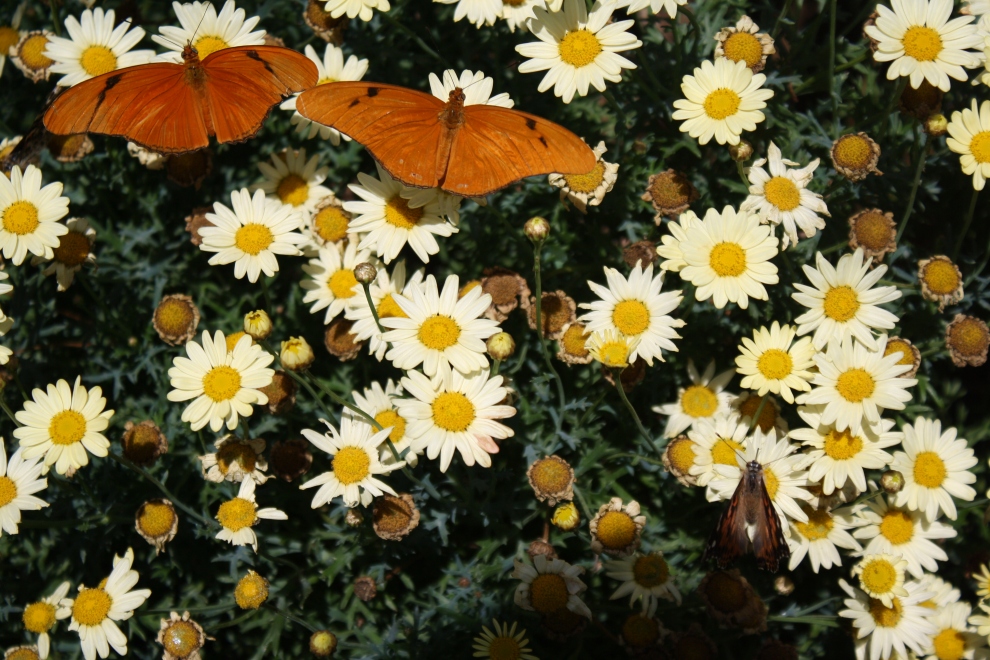 Who doesn’t like butterflies? As we waited to enter their enclosure, I felt I could hear the throb of wings.

They kind of make me nervous, said Maud.

Good for you, the docent told my mother, in her white t shirt. They like white shirts. And they’re very partial to redheads.

None of us had red hair, but I hoped in my peacock-feather-painted blouse to be a landing strip.

Leaving them behind rather sooner than I thought we would – They make some people uncomfortable, they’re insects after all! said a staff person – we progressed toward the Garden exit through the gray-green fleshy fields of cactii.

Three more butterflies hovered ahead of us.

Triplets, middleaged, each attired in a powder-pink windbreaker, cargo shorts and a floppy sun hat. I always wonder about multiples who dress alike above the age when their mothers outfit them. A matched pair of senior citizens used to roam Manhattan’s upper west side, mirror images in couture, nylons and cat-frame glasses. Related in spirit, the married couple who used to bike the streets to forage for horse manure for a Garden of Eden they planted on Eldridge Street, in the 1980s, when New York City was a simpler place.

Their names were Adam and Eve Purple. Their garden seemed to come out of nowhere. They dressed themselves, the two of them, in … purple.

16 responses to “Monsters in the Garden”