Today, light a birthday candle for Simone de Beauvoir, who made so many beautifully coherent declarations, including, “Each of us is responsible for everything and to every human being.”

Though Beauvoir came to lasting fame for her revolutionary treatiseThe Second Sex, I have always loved  her Memoirs of a Dutiful Daughter, in which she wrote about coming to womanhood in the restrictive french society of her day. 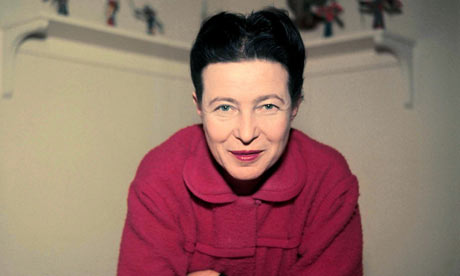 Born in 1908, Beauvoir had a sense of her uniqueness from when she was around ten years old.

“I became in my own eyes a character out of a novel… One afternoon I was playing croquet with Poupette, Jeanne, and Madeleine. We were wearing beige pinafores with red scallops and embroidered cherries. The clumps of laurel were shining in the sun, and the earth smelled good. Suddenly I was struck motionless: I was living through the first chapter of a novel in which I was the heroine… I decided that my sister and my cousins, who were prettier, more graceful, and altogether nicer than myself would be more popular than I; they would find husbands, but not I. I should feel no bitterness about it; people would be right to prefer them to me: but something would happen which would exalt me beyond all personal preference; I did not know under what form, or by whom I should be recognized for what I was. I imagined that already there was someone watching the croquet lawn and the four little girls in their beige pinafores: the eyes rested on me and a voice murmured: “She is not like other girls.”

Yet Simone was hardly a rebel compared with her best friend Zaza. The two girls were called the “inseparables.” Zaza and Simone shared a common interest in ideas and in books. “ZaZa was a cynic,” Beauvoir later said when asked what attracted her to her friend. “ I had never heard anyone speak with such openness and force. There was no such thing as propriety, and no subject was sacred. Even at such a young age, I had learned to guard my remarks, but not she. She would say anything.” She relays a story in the book about Zaza delivering a perfect solo at a packed piano recital, then sticking out her tongue to taunt her instructor – innocent enough sounding, but typical of her antisocial shenanigans.

In 1929, Zaza died of meningitis. The way Beauvoir portrays it in Memoirs, Zaza’s struggle to resist an arranged marriage was the real cause of her death. Zaza’s friendship and her untimely demise haunt Memoirs of a Dutiful Daughter, and fueled the great feminist’s later critiques of society’s constraints on women.

Beauvoir would later write: “I tore myself away from the safe comfort of certainties through my love for truth – and truth rewarded me.”

Reading about Zaza and Simone was formative for me when I was an adolescent, trying to figure out my role as the heroine of my own life. I remember gazing out the kitchen window at a spreading tree in the center of our yard and having a thought cross my mind, very clearly and consciously: I am myself. My self.

Simone de Beauvoir went from that beige pinafore on to greatness, her ideas reaching millions, startling people with her unorthodox relationships with Sartre and other men, such as, famously, the American writer Nelson Algren. Her social theory, her political activism, her fiction, her feminist theory have inspired legions. There was even a posthumous kerfuffle over a nude photo Art Shay took that surfaced on the cover of the French journal Nouvel Observateur in 2008. She shocked the world all over again. 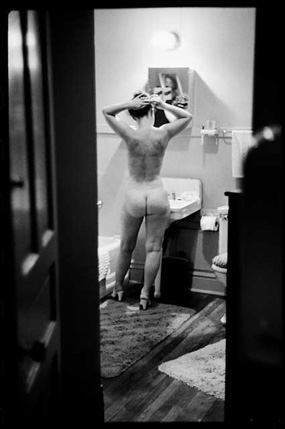 It’s a beautiful photo. I think Zaza would have approved.

One response to “Birthday Wishes, Simone”