Wenceslas Hollar has been called the finest engraver of the seventeenth century. He was certainly an amazing depicter of fur hand muffs. 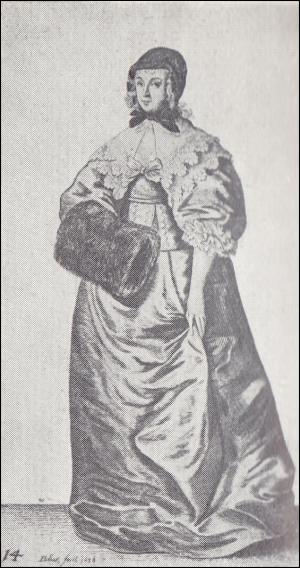 A Cap and a Muff

These are his images. Hollar came to London early in his career and basically never left, intent as he was upon documenting all he saw around him, including the Great Fire of London.

A muff could not have been essential in those days — people did wear gloves, after all, fine hand-stitched leather gloves — but they seemed to be necessary as a fashion statement. I don’t know if you ever had one, but I fondly remember the white rabbit fur muff I was given as a child. The seventeenth century became the heyday of fur, much of which came from America (with pelts traded avidly  by Blandine van Couvering of The Orphanmaster), and a hand muff could be mink or bear or even muskrat, but the softer and smoother  the better.

It’s not trick or treat. This finely attired woman wears a face mask, what was in the mid-1700s called a sun-expelling mask, in order to protect her delicate complexion. The muff looks almost too heavy to carry.

Another thing: men of the period wore hand muffs also. Only theirs were bigger. At one point in The Orphanmaster, when Blandine and Drummond are beginning to dig into the mystery of the orphan disappearances, they meet on the New Bridge that arches over the Canal, overlooking the hills of Brooklyn. It’s a cold Winter morning, and both of them carry handsome fur muffs (Blandine’s is silver fox). Fashion forward, and ready to track down a murderer.