Here are a bunch of satisfied booksellers at the Flying Fish restaurant in Seattle after consuming the molten brownie dessert that was the specialty of the house — and me, off to the right, glad and not glad at the same time to have eaten that brownie, the way you usually feel when you have dessert in a restaurant. Weren’t the fish tacos, tossed salad and halibut with pea shoots enough, after all? 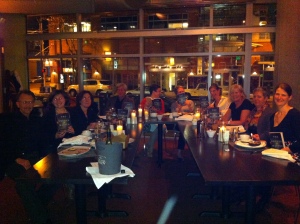 I learned so much on this trip…that booksellers love books perhaps more than writers do — not surprising, it just never occurred to me before. Books, lots of books, are their reason for being, while one book at a time, for most writers, is their reason for being. Don’t know if that makes sense.

I also heard everyplace I went about the evil of Amazon. Too many reasons to delineate here. But to put it baldly, one on-line book reviewer put it this way: “If you love books, you will not buy from Amazon.” Amazon crushing the independent bookseller and all. A lot to mull over on the plane coming back while nuzzling my Kindle Fire (which one bookstore manager assured me is actually alright, because you can get an app for the Fire that allows you to purchase ebooks from any independent bookseller you choose, as opposed to being limited to evil Amazon).

I would love to hear any thoughts on this issue if you would care to comment.

In the meantime, I returned home and jetted off to “The Steins Collect” show at the Metropolitan, which was fabulous, almost as full of photos of Gertrude and Alice as it was the then-radical paintings they displayed at 27 rue de Fleurus. 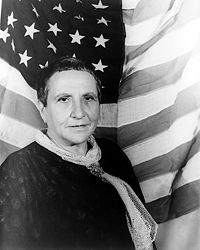 Margaret Anderson, editor of The Little Review, once said, “I dislike Gertrude’s type of egoism; her awesome self-enamouration shows itself either as a comfortable chuckling kind (which isn’t too unsympathetic), or as a grotesque, arrogant kind as when she announced on meeting a Frenchwoman for the first time, ‘I am a genius, one of the greatest in the world today’ – which seemed to me slightly insane. The Frenchwoman said, ‘She frightened me.’ I was also put off by an atmosphere of commercialism that I felt emanating around Gertrude like an aura. It made me uncomfortable, as if I were in a place I didn’t belong.”

That’s why we love her.