A Boat in the Desert

Life finds me this April Fool’s Day in a boat on a lake in the middle of a desert in the state of Arizona. It’s gusty and the waters form a chop that throws droplets onto me and the rest of the sightseers, who seem to have formed a plan to come aboard dressed in butterfly wings, the preferred colors of the Southwest.

The captain’s name, he announces over the loudspeaker, is Tom. Captain Tom will narrate the tour on the Pioneer Belle, speaking steadily for an hour and a half about the natural graces of the landscape and their deeper meanings. But first he spins a tune, Splish Splash, and I see him singing along as he maneuvers the big steering wheel to push back the boat from the dock.

Rock faces and hills rise improbably out of the drink. I am impressed by the facts the captain spiels – that Stewart Mountain Dam was built in 1930 to create this body, Saguaro Lake, that the depth of the water here is exactly 118 feet, that those white streaks you see on the dark rocks are “one hundred percent eagle poo.” Bald eagles are known to propagate here, soaring high above the cliffs. 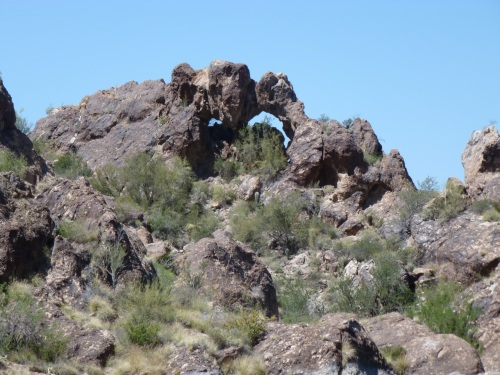 Saguaros grow in unlikely places, Captain Tom says. They have a tap root of just three inches. “The saguaro seemingly doesn’t need any soil, it pinches itself into the rock,” he says. Some specimens have been alive two hundred years. You can tell by the plethora of arms. 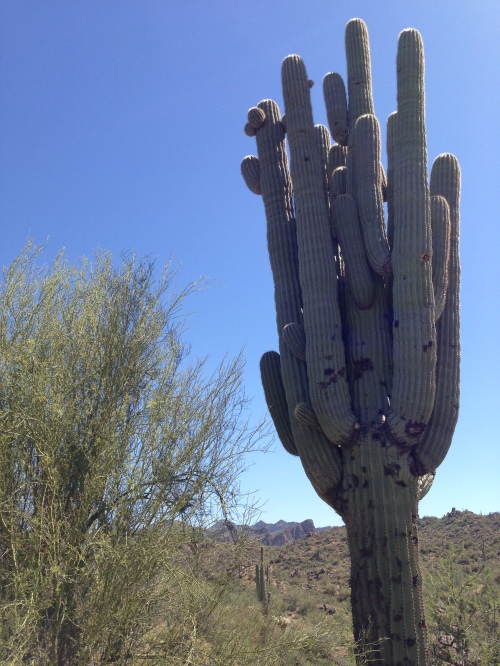 “It’s freezing!” says a woman seated in front of me. There is a stiff breeze. But, no, don’t say freezing in front of a New Yorker who has just emerged from this biting winter.

Captain Tom offers up a Kenny Chesney tune: Raw oysters, yeah, give me one and shuck it… He’ll go coastal on you.

Yes, Captain Tom is a little cheesy. You don’t know how hard it is to be exactly the right degree of cheesy until you stand up with a mike in front of a crowd that has absolutely no knowledge of what you’re talking about, that just wants to kick back with a beer in the sun and breathe…

After doing book talks, I appreciate the skill of Captain Tom.

We hear about the sharp-winged vultures circling above, who “never need to flap their wings – they come out here to play, I’m certain of it.”

About the amethysts discovered in the nineteenth century in the nearby Four Peaks range and how they found their way “into the crown jewels of five countries.” 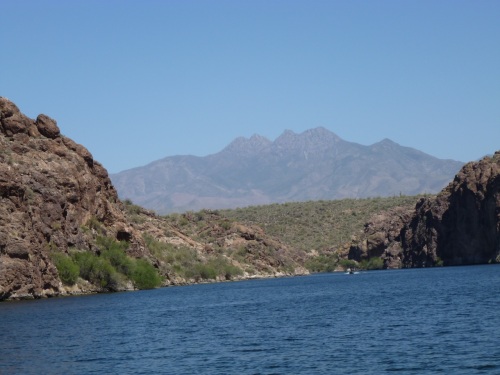 Captain Tom tells us, “I don’t make this stuff up. You can’t make it up.” Now isn’t that a line he stole from my presentation about historical fiction?

Desert varnish, says Tom, is created when manganese and iron leach out onto the face of a canyon wall.

Not listening, the golden tanned woman seated in front of me stretches out her arms. “Can you smelll the water? I love that smell,” she says to her companion.

“The large mouth bass is the trophy fish here,” says Tom, along with the walleye and some others.

“Nature’s something else, isn’t it?” says a man with a beer can.

As if prompted by Tom’s remark, a fisherman in a nearby boat pulls a yellow-silver bass out of the water, and the crowd breaks into applause.

Tom puts on another Kenny Chesney tune: No shoes, no shirt, no problem. He tells us things I didn’t know, that blue heron colonies are called heronies, that desert bighorn sheep can climb at an angle of 85 percent. That said sheep have a life cycle of just two years.

“Oh, that’s sad!” says someone who is listening to Tom. Someone who is not listening tells her friends that she is an expert waterskier and has performed her magic on every lake in Arizona. “I can get up in an instant, but after you get off your legs are like jelly sometimes.” 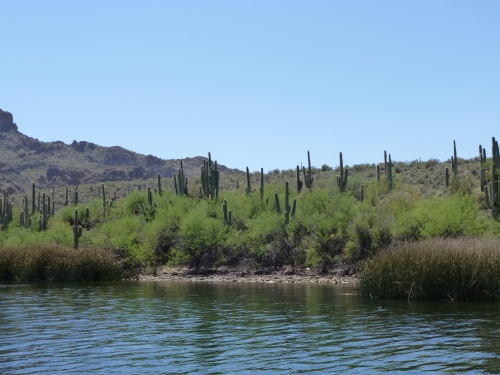 Those who did not listen to Tom can buy a DVD of the captain’s talk, complete with 120 good photos.

I might make DVD’s available when next I present about a book.

“I’ll take a few minutes and bring you back in time to the earliest residents of the Salt River Valley, the Hohokum,” says Tom, and again I feel a kindred spirit with our sightseeing boat’s narrator, that here is something I might invite an audience to do, go back in time, visit a marvelous place…

“The Hohokum,” says Tom. “The name means Those Who Have Vanished.”

Rock me momma any way you feel

Rock me momma like the wind and the rain

Tom calls out the beauty in the drabness of the rocks all around, the chemistry of lichen, and I see the way the granite can resemble faces, as clouds can. 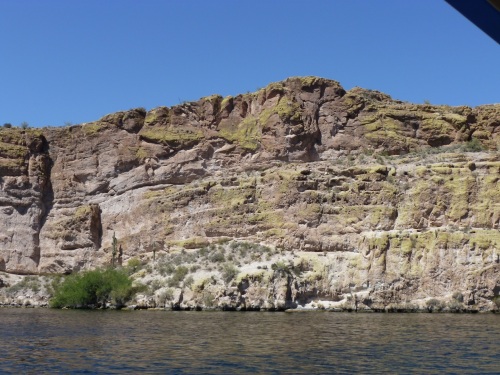 There is grandeur here in the ironwood trees that can live up to 1,500 years. Is the water blue or green? I am getting sun-stunned, and Tom’s voice is so lilting. I see why people drift off during book talks.

Somehow the last anecdote the captain relates, as the boat approaches the dock, is the most powerful, though it lacks inches or years or other measures, and only has the teller’s personal voice. Tom was building a house at the edge of this desert that surrounds us, he says, and he laid down a smooth coat of dirt beside the foundation and wetted it well with water. He came back to the patch of earth later to find mouse tracks, pack rat indentations, the footprints of gambrel quail, of coyotes, javelina, and the slithery imprint of a snake. He saw this with his own eyes, he says.

I was wide awake in a boat on a lake in the middle of the desert, and I heard it.

6 responses to “A Boat in the Desert”