In the summer of 1977 I ran away to join the circus. I didn’t have to run too far–it was located in New York City, my back yard, where I went to college. The Big Apple Circus was just being born, and I served as a lowly gal friday for the new entity, first in its office in SoHo and later, when the tent went up, at the circus itself, at Battery Park, the lower west side of Manhattan, on a desolate, gritty stretch of landfill in the shadow of the World Trade Towers. Not a circus person, not an acrobat or a performer of any kind – an aspiring writer who did more dreaming than writing – I found myself in awe of the charismatic, enterprising young men who ran the enterprise, Paul Binder and Michael Christensen, street performers just back from doing their ultracool juggling act in Paris.

That July 18, we opened the one-ring, European-style circus with its old-fashioned green canvas big top. No animals, just clowns and tumblers, people I watched balance and jump and stretch as they rehearsed, sweating in the hot early summer weather, some of them street kids seemingly made out of elastic, recruited from some of the less tony precincts of New York.

I would turn twenty the day after the circus opened. I remember selling tickets out of the office/trailer a stone’s throw from the tent alongside an intense, frizzy-haired kid who taught me the meaning of the term Ashkenazi. Funny the things you recall learning at odd times in your life. The Battery was a magical place to be. Dusk would fall, the hazy sun setting red over New Jersey, shadows would stretch across the landfill, and we would be waiting there, just hoping for an audience for the evening performance.

Earlier, a peak experience came when I somehow got assigned to hop into the cab of the rig that drove into town to deliver the gigantic tent. As I tried to guide the truck around the curve of the Battery to the circus entrance we bumped up over the median with a lurch, and I’m not sure that we didn’t crush it. Oops, don’t send the writer out to get technical with an 18-wheeler.

I came upon these turn of the century circus photos by F.W. Glasier, a commercial photographer in Brockton, Mass., who shot promotional photos of the various circuses that came through town over the years, and I was reminded of that time in the late 1970s when one small-town circus was in its infancy.

Here are strongwomen from 1904. 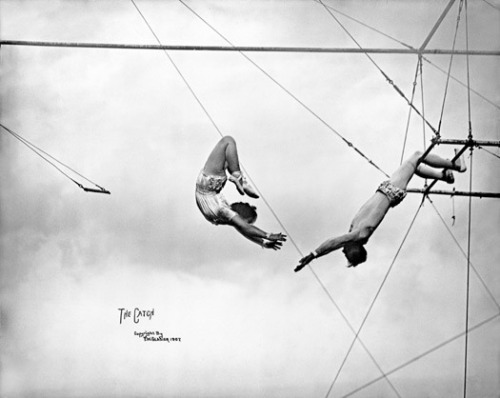 The raw energy of clowning.

A mistress of the wire. 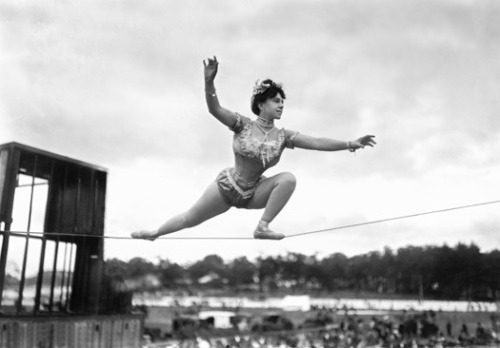 And, from the 1920s, circus twins who look to me like they have the world on a string.