“Where are the reptiles?” the adolescent boy asked the guard at the door of the convention center.

Both heads swivelled to look inside at the crowded arena.

“The reptiles – are they here?”

No. The reptile show was last weekend. Here at Chocolate Expo there were only the chocolate fiends.

At two minutes to eleven, the lines stretched down the steps and around the sidewalk. “My friends are at the Marathon and here I am at chocolate world,” the girl behind me said wryly. “Stupid chocolate,” said a husband. “It’s gonna be fun, honey,” insisted his wife.

It was the annual gathering of people intent on buying and selling cacao-based products in all shapes, sizes and flavors – the more novel the better. I thought I’d see what the fuss was about.

I love chocolate, of course. Gil says my three major food groups are chocolate, coffee and milk. (That puts mocha at the top of the pyramid, I guess.)

In the convention center, people jostled to get free tastes. It seemed to actually be about half chocolate and half every other kind of artisenal food product, from honey to wine to dill pickles to maple syrup. I was surprised to find Cap’n Crunch gelato.

But there was also every kind of truffle under the sun. 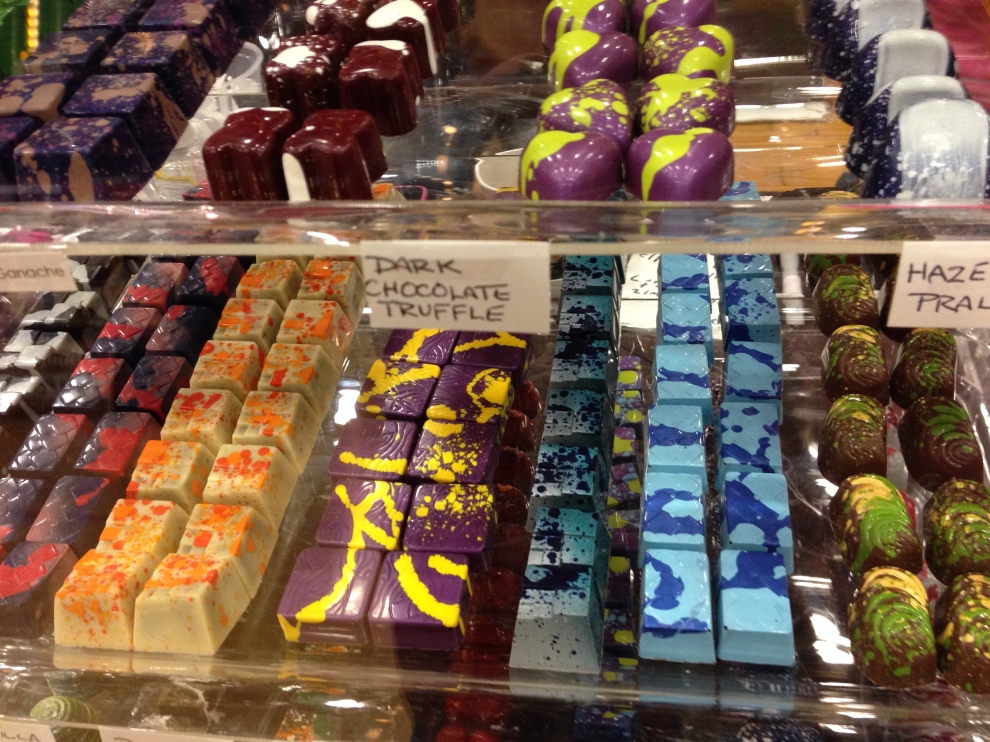 Alicia at Two Chicks with Chocolate fed me a taste of rosemary lemon truffle, handpainted with colored cocoa butter, one of 60 different flavors, and I was on my way.

Pumpkin was big in everything. I saw chocolate-dipped waffles.

Chocolate-dipped fruits of all kinds.

Kids and adults alike with sticky hands, sticky faces. There was an awful amount of plastic wrapping, it seemed to me. 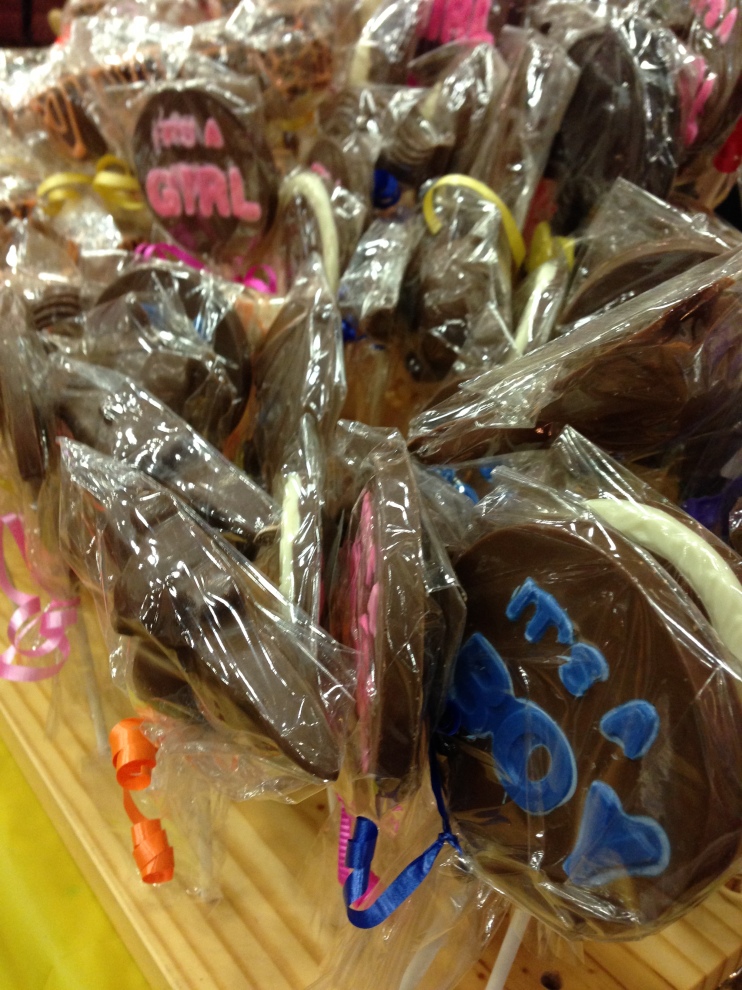 Chocolate culture is very high–low. I saw the most exquisite Indian truffles, created for the New Year, Dawali, by Aarti at Le Rouge in the shape of a “diya,” or lamp.  Truffles with ganache came in exotic flavors with amazing “mouthfeel,” as the technical term goes. I tried the Kiser Pista Ganache, made with saffron.

Ethereal, I thought. So I couldn’t resist making off with a single specimen, the Paan Bahar truffle, made with betel leaves and rose petals.

More spirituality lay around the corner, where half-pound, solid chocolate Buddhas were cheerfully peddled at Oliver Kita Fine Confections, by a salesperson who told me, “Most people break them up to share when they chant with friends.” Okay.

Chocolate has only been the recognizable treat that we go crazy over for a relatively short chapter of human history. The Aztecs downed it as a cold, bitter, spicy brew – Montezuma alone was said to drink 50 cups a day. It became a sweetened beverage in the 17th century, flowing from the cacao plantations of South America to France by way of Louis XIV’s Spanish bride, Princess Maria Theresa. 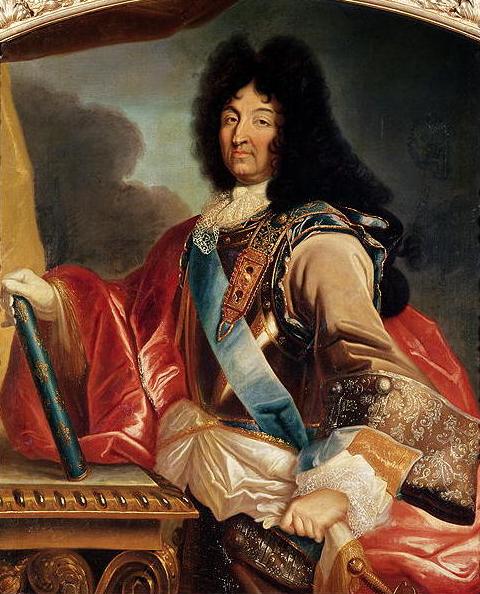 She gave the Sun King a chest of chocolate in 1643 for an engagement present, and his avid consumption of the beverage was said to fuel his ability to pleasure his wife twice a day even into his seventies.

Create New Motions of the Flesh,

And cause them long for you know what…

If they but taste of chocolate.

Samuel Pepys noted in 1657 that it was available.

“In Bishopsgate Street in Queen’s Head Alley, at a Frenchman’s house, is an excellent West India drink called chocolate, to be sold, where you may have it ready at any time, and also unmade at reasonable rates.”

Michael Pollan writes in his book In Defense of Food about a group of Americans being shown the words “chocolate cake” to discover their word associations. “Guilt” was the top response. The response of French eaters to the same prompt: “celebration.”

Everyone, no matter how-guilt-ridden, knows that chocolate is the love food. Someone should write a love poem to it.

I did feel love in the air today, at least love of chocolate, so it’s sort of a closed loop.

A company calling itself Rescue Chocolate offered vegan, organic, fair-trade, kosher chocolates, with all profits to be donated to animal rescue groups.

I thought I’d purchase one but the line was too long.

Masks, with a chocolate base, from The Chocolate Box NYC. Everything about their decoration was edible.

The proprietor, Sabrina, looked more like a ballet dancer than a candy maker.

Less artistic but just as tempting, hand-dipped Twinkies from a booth that won an award from Hudson Valley Magazine for its pies last year. 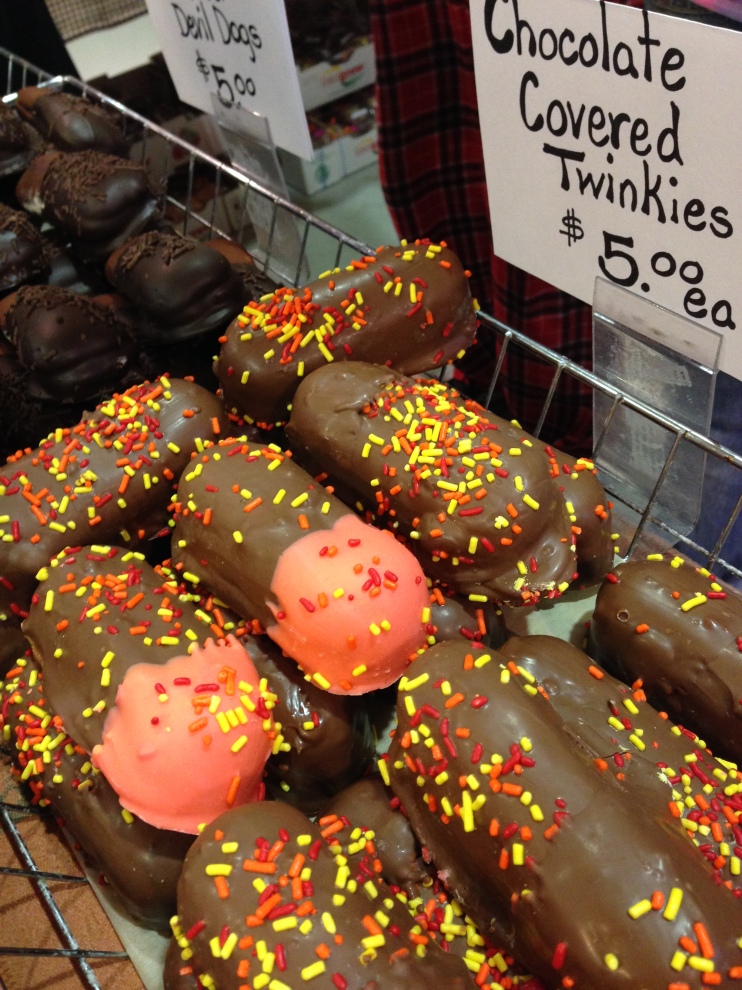 The Twinkies are one of their best sellers — since the confection was off the market for a while it drove up the demand. “We ran out last year, Gina Solari told me. “Anything Nutella is also a best seller,” she added.

Sick of chocolate, finally, incredibly, I retired to the stage area with two non-cocoa nourishments, strong coffee and a lemon-and-sugar crepe.

In the distance, convention-goers slurped up Cap’n Crunch gelato and sugar-dipped waffles. I recalled one of the most striking film food scenes in recent memory, in Hayao Miyazaki’s animated Spirited Away, when the 10-year-old Chihiro’s careless parents sit down at a counter restaurant for a snack and get turned into munching, slobbering, devouring giant pigs. 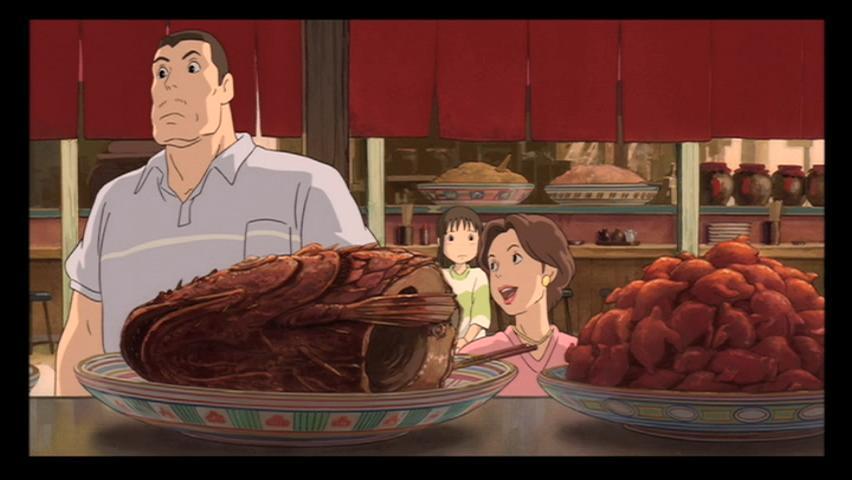 A chef-lecturer delivered informational nuggets about the subject at hand. Chocolate falls to the ground in South America, she said, after the monkeys have eaten the fruit around it. It’s a seed. She confided in the people whose sweet tooth had driven them to the convention center even before lunch on a beautiful Sunday in fall. “I know I’m probably wrecking your world, but white chocolate is not chocolate. It’s fat and sugar. You could call it fat-sugar!”

One response to “Chocolate Poems”