In a New Light at the Guggenheim

I finally went, on the next to last day of the exhibition. The James Turrell installation, that is, called Aten Reign, at the Solomon R. Guggenheim Museum in New York City.

Now I understand why.

Turrell is a conceptual artist who manipulates natural and artificial light on a grand scale. He’s been practicing his craft since the 1960s. “My art deals with light itself,” he has said. “It’s not the bearer of the revelation. It is the revelation.”

Sounds lofty. But when you enter the rotunda of the Guggenheim and look up to see the deep magic of colored orbs, eggs really, egg after egg after egg, created by lights projected on the concentric rings of the museum’s famous spiral, you see what he means. As you watch, the colors begin to shift, from pale silver to violet to tangerine to raspberry  to acid lime. A fruit-sweetened flow of light.

My mind entered a waking dream state. I have to admit that I was equally fascinated by the 200 or so human animals on display beneath the well of light. Tourists. Natives. Suits and shorts, stripes and leggings and boots. Fifteen, twenty languages, who knew? It was one of those afternoons when people look especially beautiful. We were all in a cave filled with liquid light, all creatures awestruck, bemused, interested in the same phenomenon. Turrell is a Quaker, a faith he characterizes as having a “straightforward, strict presentation of the sublime.” Patient contemplation is a tenet of his work. It’s not a particular feature of life in New York City, usually, yet here it was.

A circular mat lay in the center of the space. People sprawled on the pad like participants at an old-fashioned happening, gaping upward at the magnificent spaces of Frank Lloyd Wright’s genius structure, now transformed to a Turrell Skyspace. 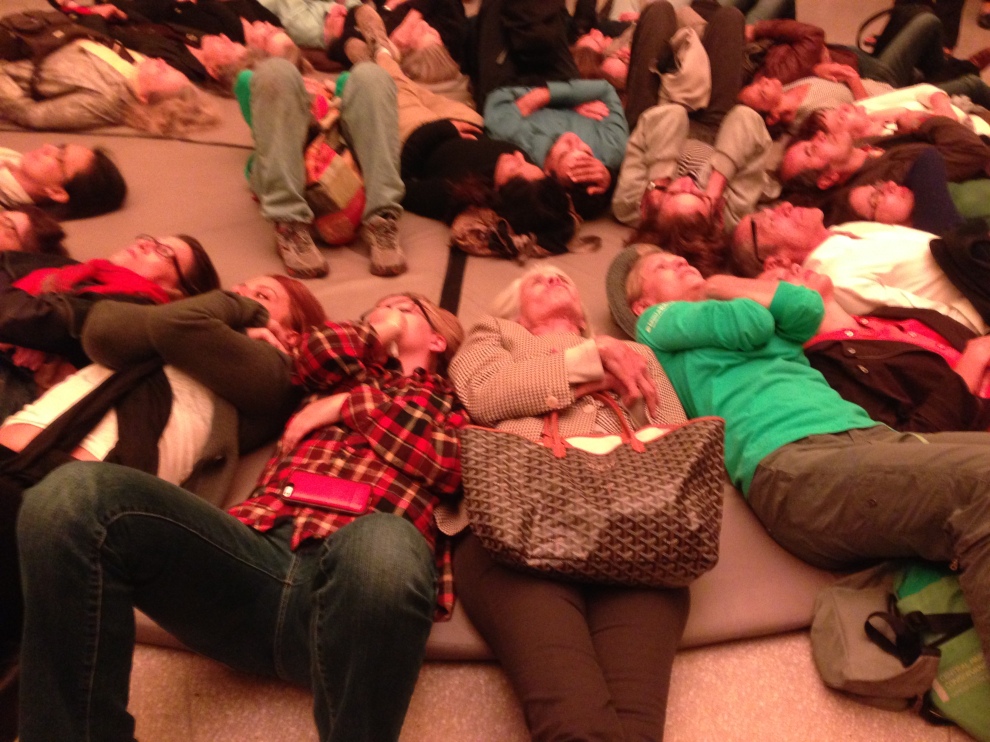 Museum goers waited calmly for a chance at the mat – it was easier to find a parking spot outside than a supine position on the Guggenheim’s floor. They tried to take pictures of the lights but were checked by guards. But Aten Reign begged for pictures. It reminded me of that experiment with toddlers and marshmallows, where a lady gives a kid a marshmallow and says if he holds off for x minutes without eating it, he’ll be given two. What kid can exert that much self control?  Likewise, what adult at this luscious light show could resist clicking a phone upward even if it meant sneaking to do it?

I was reminded of Oscar Wilde’s famous line, We are all in the gutter, but some of us are looking at the stars. Gil waded into the scrum, pretty spry for a nearly-sixty-year-old man – you had to move fast to claim a spot – and lay himself down, spellbound. “It was like a wrestling mat,” he told me afterward, “one where people have been pinned too many times.” The funk of the thousands of bodies since the show opened somehow added to the appeal.

The sky above went from ultraviolet to dark as a storm. Tranquillity descended. Was this what my sometime cynic of a husband liked to call the “theater of faint effect” – something that’s not necessarily going to change your life?  Still, “I felt like I needed a lamaze coach” was what he told me later about the near birth experience he’d had. This would seem to partake of E.M. Forster’s “only connect,” with all of us touching this spiritual lozenge above us, this gleaming cough drop of a god, and at the same time touching each other.

A friend once told me about her experience walking on burning coals, that there was no rational reason for it but she was transformed by a mystical joy. No one knows exactly why, but it happens.

I sat on the bench that ran around the circular walls. Behind me I realized I was listening to the plash of a fountain. This is the first time I’ve ever employed that word. Later, at lunch in the museum’s somewhat pretentiously named restaurant, The Wright, I ate something I had never tried before, in a frisee salad: a skinned cherry tomato, poached or braised somehow to bring out its pulpy flavor. In the corner, Isaac Mizrahi with his doo-rag held forth in some kind of ecstatic state.

Everything appeared fresh after the Turrell show. September 25, the exhibit closes. There is only tomorrow. Go.

6 responses to “In a New Light at the Guggenheim”