The Danger of Self Discovery 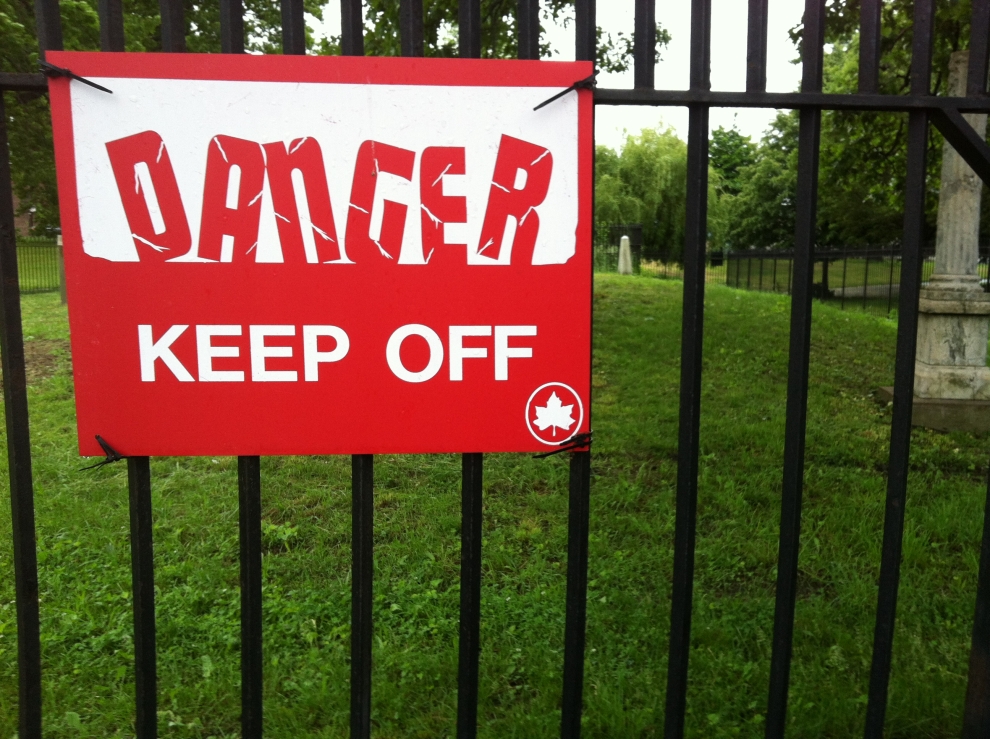 I don’t know what the danger was, except of self discovery.

I had driven down to the Bronx because I heard tell of a group of elementary school kids there who had stumbled upon a centuries-old, unkempt slave burial ground next to the well-preserved graveyard of the privileged families who owned them. They were trying to reinvest the slave cemetery with the gravitas it deserved. I wanted to see the place, old and mysterious and deep in the Bronx. So Gil and I set off.

The Bronx once had a swellegant reputation, home as it was to distinguished families and verdant farms. It was actually settled by a Swedish sea captain named Jonas Bronck. General Washington marched his troops through on their way to Westchester in October 1776, when no one knew how long the war was going to last.

The cemetery in question, now the center of Drake Park, was originally laid out by the Hunt family – the clan for which Hunts Point was named. The Hunts and the Leggetts ran the local show, along with a few other families and all of them were laid to rest there.

It had been raining for days. Gil and I had the park absolutely to ourselves. We saw an allee of trees running alongside the cemetary.

Weeds had overtaken the park – only three acres – in the middle of the busy commercial neighborhood. Above our heads, a mature black oak, circa 1848.

When the park was landscaped in 1915 the slave graveyard disappeared in the shuffle. Once, in some obscure text, its location was referred to as across a lane — was that the allee we saw? If so, the plot has no marking today but a wire fence.

Teacher Justin Czarka of PS 48 leads the effort to bring recognition to the site — which includes local historians, community organizations, museums, city agencies. To document the final resting place of the slaves of these prominent New York families.

I’m reminded of the fight to commemorate the African Burial Ground in Manhattan, after remains were discovered during the construction of a Federal office building in 1991. In 2003 I stood and watched the processional that led to the reinterrment of 419 sets of remains at the site where they had been discovered. Women and men in brightly colored African garb came through accompanying wood coffins built in Ghana and carved with adinkra symbols.

The ceremony was heady, the effort fraught with tensions, but I find this history in the Bronx unsettling in a more intimate way, the white graves groomed and protected and the black graves lost to time. The students found a photo in the city archives documenting the site at the turn of the century.

A 1913 brochure about the Bronx noted that the remains of colonial soldiers were interred in the Hunt graveyard, along with, nearby, slaves of earlier residents, and also “Bill,” the  negro pilot of the wrecked British frigate Hussar.

The kids of  PS 48  examined census data, early maps, coastal surveys, wills and early histories and found some surprising details about how whites and blacks lived in early New York. These wealthy coastal families owned quite a few slaves. John Leggett stipulated in his 1777 will that his son Cornelius would inherit “My Negro Man Tite and my Negro boy Ben” as well as “four Milk Cows.” His daughter Eleanor would receive his “Negro Wench Bett” and a silver cup. Laws were passed to prevent slaves’ sedition. They were forbidden to be in the streets an hour after sunset, by an ordinance passed in 1712.

Blacks and whites would not be buried together, at the Hunt and Legett cemetery, but within an interesting proximity.

The park itself was named not after Hunts or Legetts but after Joseph Rodman Drake, who grew up in the Hunt mansion, became a writer-physician and died of tuberculosis when he was 25, in 1820. His most famous poem, “The American Flag” spoke of freedom:

She tore the azure robe of night,

And set the stars of glory there.

She mingled with its gorgeous dyes

The milky baldric of the skies,

And striped its pure celestial white,

With streakings of the morning light…

I wonder what Drake would have made of the Hunts Point neighborhood now, chockablock with auto glass shops and cheap eateries. We left the antique mysteries of the graveyard and re-entered loud, mechanical contemporary New York. I love the signage along Hunts Point Boulevard, much of it a gaudy yellow and red and fancily hand lettered.

Mo Gridder’s is probably the only barbeque joint, at least in New York, with its dining lounge in an auto parts store. 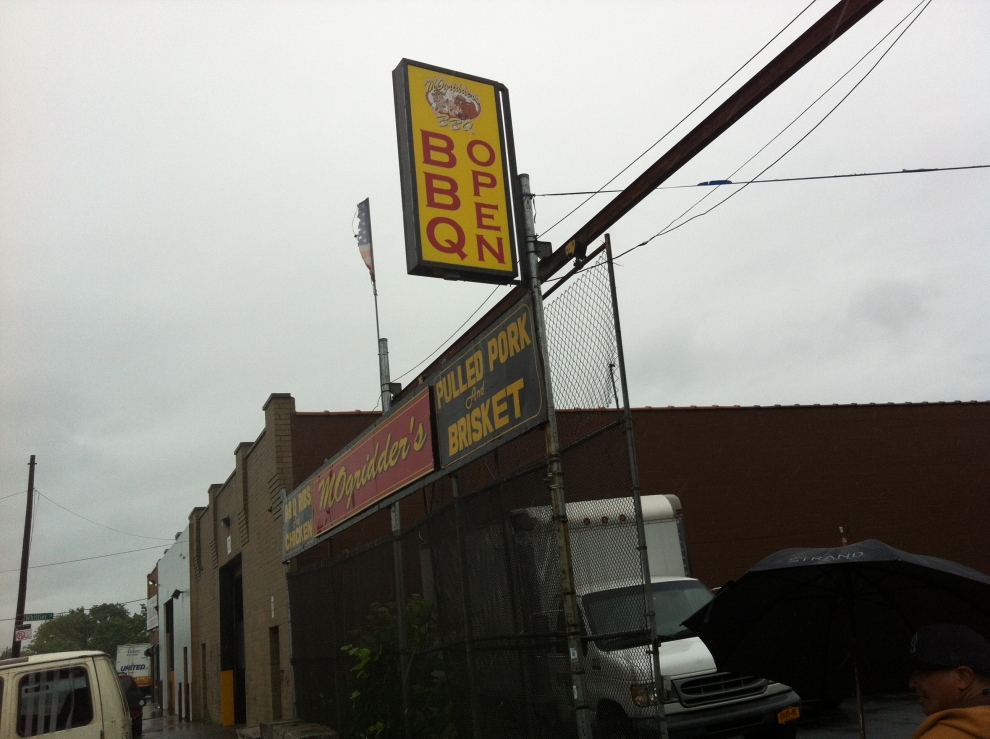 As we approached an intersection a woman actually ran into the street, beckoning us loudly to come get our car repaired at her place. People stood in the gutters, waiting, sentries for their businesses.

Other, more faded signs spoke of years of dreams deferred.

The Hunts Point Market is alive and well, though it was sleeping when we visited – suppliers of meat, seafood and produce open all night long and shut down by day. The air when we passed the fish buildings had the scent of the sea.

It used to be that sex was for sale too, in abundance, at Hunts Point, but that’s changed. A vestige lives on in the unfortunately titled Mr. Wedge. The last of the Mohicans for adult entertainment in this part of the Bronx.

A strip joint you can visit while getting your car’s windshield replaced.

Randall Restaurant is a good place to hear Anthony Santos singing a melodious Como Te Voy a Dejar while chewing on garlicky deep fried porkchops or to just chat with a friend. About the liveliest cafe I’ve ever been in. Everyone is welcome, even turistos like us.

The pernil is supposed to be formidable but they were all sold out by the time we got there for lunch – for the rest of the clientele, lunch comes in the morning, after a shift at Hunts Point. The pineapple cake, though, and cafe con leche sustained us for our trip home in the rain.

Yes, indeed, the show that never ends. I’m glad we got there before anyone could scrub off the paint.

I like to think of the surprise — the shock — of our forefathers and mothers in the Bronx had they seen the mixing of colors and cultures we saw today. Yes, it can feel dangerous at times. Gertrude Stein once said, Considering how dangerous everything is, nothing is really very frightening.

3 responses to “The Danger of Self Discovery”