Some magic has come into my life. I am not a person who favors yard ornaments in the vein of gnomes, glass spheres or plywood ladies with polkadotted underpants. And I’ve never even read The Hobbit.

But I have fallen in love with a Wizard Stick.

It owes part of its charm to the fact that it was a gift from old friends. Part, also, to the chunky blue-green “crystal” grasped in its iron claw. The Wizard Stick will bring the rains to my vegetable garden, I am sure, when planted facing in the proper direction and with the ceremony that behooves its installation. Gil’s going to jump around minus his undershorts while I chant for precipitation.

But there is something else. The company that created the Wizard Stick, Tringalli Iron Works, fabricates the totems only as a sidelight to its regular business. A business to which street tree guards are central, and have been since Liborio Tringalli started the enterprise in Tribeca in the 1920s.

Yes, tree guards do matter. Here is one you probably have overlooked every time you ambled down a New York City sidewalk. Eighteen-inch iron hoops all around. Shielding a little root-friendly plot that is blessedly feces-free.

Edith Wharton showed Lily Bart roaming around near Grand Central Station in the humid heat of a Manhattan summer afternoon, desperate to find some cool relief.

“‘Oh dear, I’m so hot and thirsty—and what a hideous place New York is!’ She looked despairingly up and down the dreary thoroughfare. ‘Other cities put on their best clothes in summer, but New York seems to sit in its shirtsleeves.’ Her eyes wandered down one of the side-streets. ‘Some one has had the humanity to plant a few trees over there. Let us go into the shade.’

“’I am glad my street meets with your approval,’ said Selden as they turned the corner.”

In 1905, when House of Mirth was published, a battle was underway over New York’s street trees.  The island was still nostalgically remembered as a haven, a bower of oak, chestnut, pine and cedar, but now the trees had been almost all torn down for new construction. They were inconvenient to development. 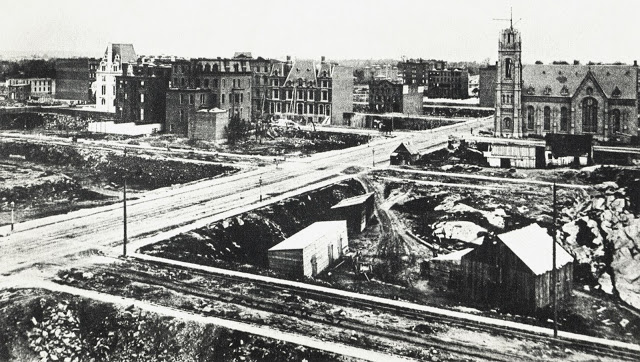 I wrote about the transformation in my book Love, Fiercely, that took place during that period.  I.N. Phelps Stokes despaired over the change:

Old, bucolic Manhattan was vanishing, buried in the smooth cement of the new. By the turn of the century, the leafy streets of lower New York had lost their shade.

In an incisive history called The Creative Destruction of Manhattan 1900-1940 author Max Page charts the demise of the New York street tree. At a certain point the trees could be counted on one hand. I love this 1913 photo of a woman he included in his book, walking by the sole remaining tree at Fifth Avenue and 37th Strteet. 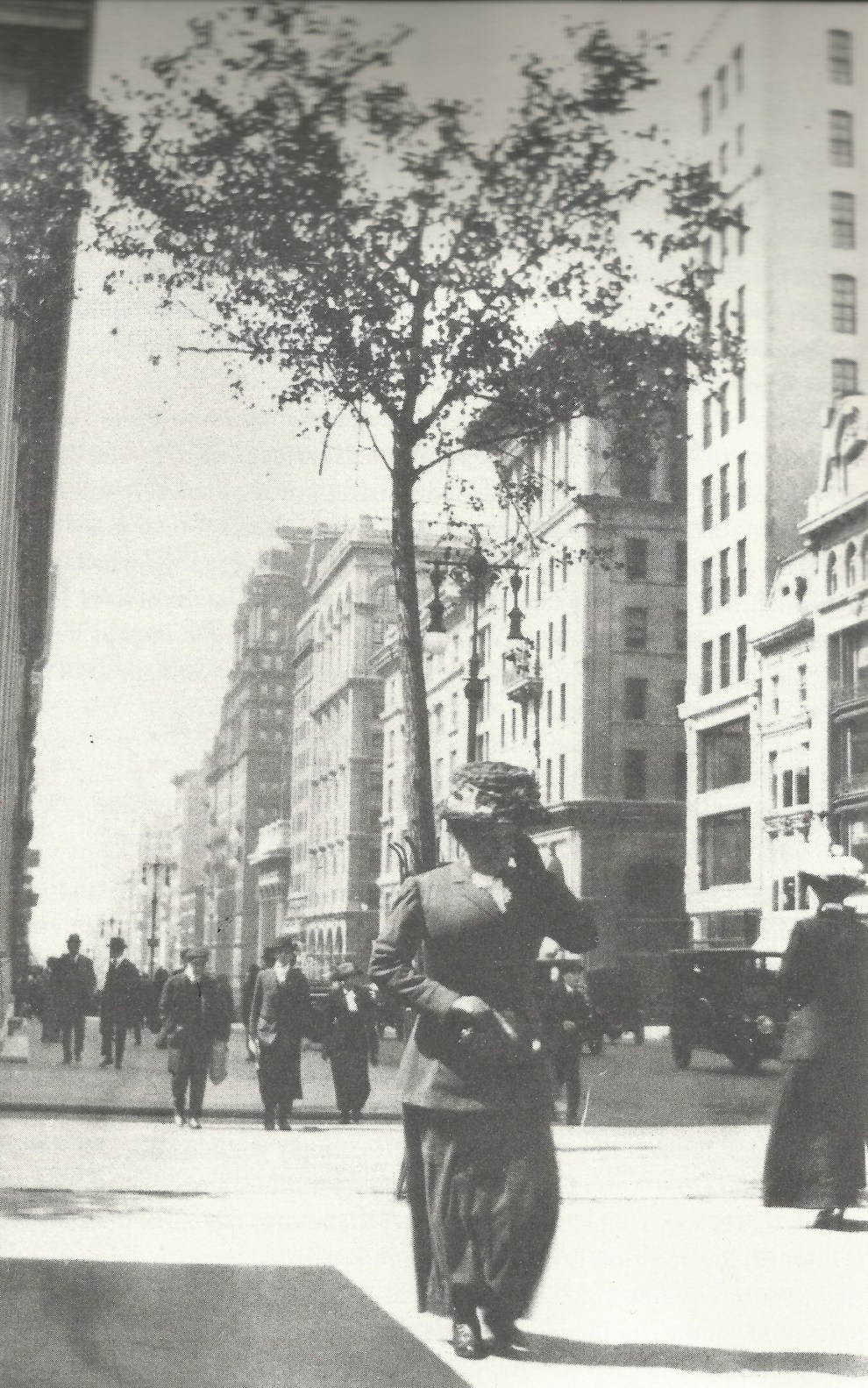 And the pear tree planted by Peter Stuyvesant at 1oth Street and Third Avenue. The city mourned when it was killed after being mowed into by a dray in 1867; it had stood for 200 years.

Yes, there was a love of trees, and 317,166 were planted in New York State on Arbor Day between 1889 and 1909. But in 1909 only one in five of those trees still stood. A Tree Planting Association sprang up to organize around replenishing the city’s streets, with a classic Progressive fervor, augmenting the efforts of New York’s Parks Department. The fact that we have any street trees at all today is probably due to their efforts.

Today, the city’s plan is to plant more than 200,000 new street trees over a decade (street trees area  subset of city trees in general, which include parks, yards, etc). There are upwards of half a million street trees now. MillionTreesNYC is playing an important part. Saplings come from three different nurseries in Maryland, Buffalo and long Island. These are Maples.

People who care about trees can even become Citizen Pruners, taking a five-session course and getting a license that lasts for five years. A friend of mine has become an arborist, a new profession, who advises construction companies on the health of trees.

The New York Parks Department keeps count of species, and has identified 168, with the top specimens the London Plane Tree, the Littleleaf Linden, the Norway maple, the Green Ash and the Callery Pear. And there is always the ubiquitous, sometimes stinky ginkgo biloba, with its pretty fan-shaped leaves. Long thought to be extinct, the ginkgo was rediscovered during Victorian times in hidden groves in China.

All of them need a tree guard.

A Wizard Stick might be nice, too. Some magic, to keep a tree alive when the chips are down.

I’m not parting with mine.