I’ve been a little laid up with an ornery quadriceps today, sitting on the couch, smoothed out with Motrin, admiring the fire and working up a ribbon scarf for my friend who is just moving in to a new home.

She actually cut through from her old apartment to claim the new space, so it’s sort of a Lion, Witch and the Wardrobe situation, with the old place lived in and broken in and loved, and the new place all spitshined and airy and immaculate. Magical.

The scarf I’m knitting isn’t the complementary flower arrangement those new light-sage walls deserve, but it’s got the warm rose colorations of the springtime that will have arrived when she and her family have moved in and colonized those spacious, high-ceilinged rooms.

Yesterday we toasted the novelty of getting this new add-on to her life, with seltzer. “If you don’t have enough,” chortled my friend, “reach for more!” She had been waiting a long time for this expansion.

The scent of just-finished oak flooring reminded me of moving in to an off-campus apartment so many years ago, when I was in college. The combined polyurethene underfoot and bright white latex on the walls made a heady perfume that promised a new exotic life out from adult supervision. I remember the sound bouncing off the undisturbed walls the first day I walked in, they echoed with promise. I put a scarred old wooden office desk in the corner and propped up my beloved books, then set my bed against the window where I could look out over the little trees in Straus Park and hear the rumble and wheeze of the 104 Broadway bus halting at the stop on our corner. It was the first home that I myself made, all for myself.

“Home is a name, a word,” wrote Dickens. “It is a strong one; stronger than a magician ever spoke, or spirit ever answered to, in the strongest conjuration.”

You can live in a primitive treehouse in Laos, or a Fifth Avenue duplex. 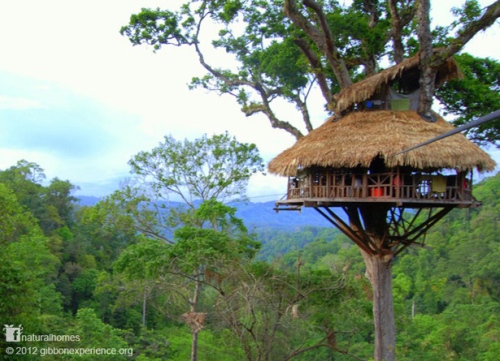 I’ve written about an 1890s mansion in the Berkshires, called Shadow Brook, that had 100 rooms and an attic so big kids could ride their bikes in it. My own house of the moment, the Cabin, could fit in a pocket.

Home exerts the same pull, no matter how swellegant or how modest. It affords the same excitement when you first move in, too.

Even for animals. A dog makes a rug its home, those four corners for that moment are the ends of the earth and all that matter.

Dickinson said it, typically, simply: “Where thou art – that – is Home.” So, to expand your home, it would seem, to move in, especially if you’ve been yearning for it for years, is an expansion of self. Could anything be more thrilling?

2 responses to “Adding On”