A Blast From the Past-New York Times Story

I woke up this morning and saw two things:

1. My breath in the air when I drank my coffee.

2. The article I wrote for the Times T magazine about the magical townhouse on East 72 Street in Manhattan, the one dating to the 1880s whose owners had restored it to an — imagined — former appearance, down to the velvet portierres, intricate wallpaper, sconces, mammoth china urns and brass tacks holding the leather coverings to the wall of the dining room. And the gaslamps out front, flanking the stained-glass inset front door. The 17-room brownstone is a curiosity not only for its allegiance to these details but because its owners, the Loebs, actually live a full life there, amid the antiques and fine woods, a couple and adolescent triplets! It’s a period room at the Metropolitan Museum with no velvet ropes. You can see the digital version of the article here, and don’t miss the slide show.

The disaster that has befallen New York with Sandy is not without precedent. In the first decade of the Loeb house’s existence, when cows still grazed nearby and there were basically no buildings anywhere around, a winter storm wreaked havoc here. 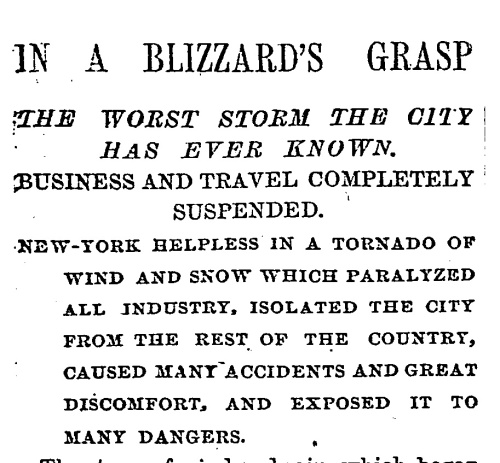 The Great Blizzard of 1888 ranks as one of the most serious natural disasters ever to hit our region. The snow hit when the March weather was unseasonably mild. More than fifty inches fell, with sustained winds of more than 40 miles per hour and gusts up to 80. Drifts more than 30 feet high buried homes and shops. Afterward, everything had to be dug out by hand, with temperatures in the single digits and below. Fire departments were paralyzed so fires burned uncontrolled. Around 400 people died – plus 100 sailors whose ships were wrecked. Pictures of the traumatized city  are amazing. 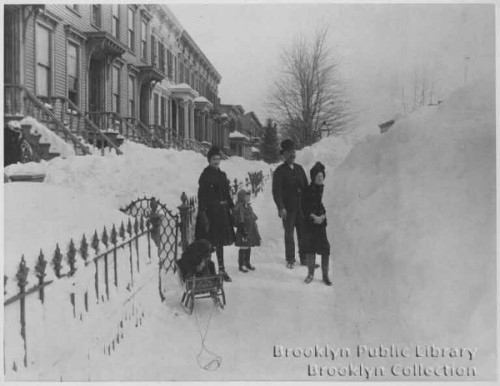 Imagine the Loeb townhouse in its row of nine at the 72nd Street outpost, snows heaped to the first floor windows and no way to clear the stuff. The city used to send horse drawn carts to collect the mounds and dump them in the East River, but you can imagine the labor and time involved.

We are due for a Nor’easter on Wednesday, the weather people say. Let’s hope the snow doesn’t sock in the Cabin’s windows.