Don’t Try This at Home

An Australian dance manual of 1875, the year I’m currently writing about:

“This step in the promenade is executed only with the left foot–in describing a circle it is made with both feet. The position is the same for the mazurka as for the Valse a deux temps; the foot should neither be too much bent nor turned out, but left in its natural position., The heel strokes which are interspersed with the various steps of the mazurka, and which are even amongst the necessary accompaniments of the dance must be given in time, and with a certain energy, but without exaggeration. Such stroke, when too noisy, will always be considered in a drawing-room or ball-room as a mark of very bad taste. By the aid of the four elementary steps, which I have described, a pupil may be enabled to execute what is called in the mazurka a Promenade. The Promenade is performed by holding the lady with the right hand and making her accomplish a fanciful course, according to the space allowed.” 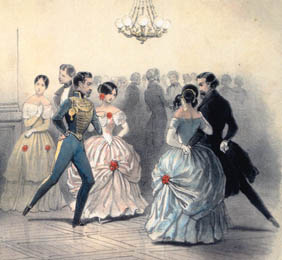