If you believe in the power of coincidence it won’t surprise you that the song I heard in my car on my way back from apple picking today, by Belly, the ’90s rock band, was Feed the Tree:

So take your hat off

When you’re talking to me

And be there when I feed the tree

I went apple picking in the most incongruous orchard I have ever seen — and I have seen orchards in my time. We lived for a while in a farmhouse in the middle of an old orchard upstate, where we were intoxicated every spring by the ineffable honey of apple blossoms (and the taste of blueberry dacquiries).

“You’ll like it – it’s a little different!” my brother Peter told me when we talked about going picking there. That was an understatement. Edward Gorey might have created Mr. Apples, which is run by a man named Philip Apple in High Falls, at the edge of the Catskills. There were ghost barns.

Mr. Apples had just two things available for purchase: pick your own apples and cider vinegar. His signage covered the place.

The trees themselves were overgrown, twisted and blackened, their leaves gone, and their apples had fallen to the ground in drifts of blemished fruit.

I loved this place, if only because it was so different from the corn maze-smiling scarecrow-fake pumpkin patch orchards you usually find in the Hudson Valley. It was a little hard to get past the produce, though. “There are some black spots,” said Mr. Apples. “When you get home, brush them with a cloth and the spots will come off.” 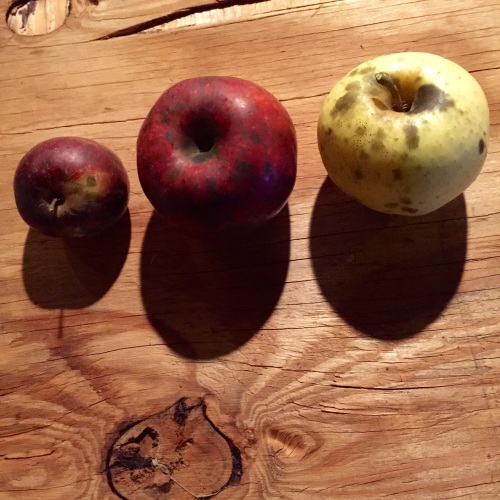 I can tell you that no amount of rubbing would take the spots off. “Organic style apple” was how he billed his product, and he said the spots were caused by humidity. They looked like they came out of Snow White. I bought half a bushel and will find some use for the poor things, maybe apple sauce.

After Apple Picking is Robert Frost’s fabulous poem about, yes, harvesting apples, but also about human frailty, a woodchuck and death, among other things.

But I am done with apple-picking now.

Essence of winter sleep is on the night,

The scent of apples: I am drowsing off.

It is so complex and wonderful that you must take yourself to the Poetry Foundation and read it.

Since I began working as an arborist, the image comes into my head quite often: the tantrumming trees in The Wizard of Oz hurling apples.

The fruit I saw today would be suitable for throwing. And that’s a good thing. Joni Mitchell: Hey farmer, farmer, put away your DDT. Give me spots on my apples but leave me with the birds and bees.

6 responses to “Feed the Tree”