Eat chicken, for one.

Questlove, the drummer and frontman for the band the Roots, has got so deep into the fried poultry business that he had some kind of a late night throwdown with Momofuko head honcho and chicken man David Chang on Late Night with Jimmy Fallon. Now the musician has opened a counter joint in New York’s Chelsea Market called Hybird that serves exclusively drumsticks, fried dumplings, biscuits and cupcakes. All the essentials for a balanced diet. 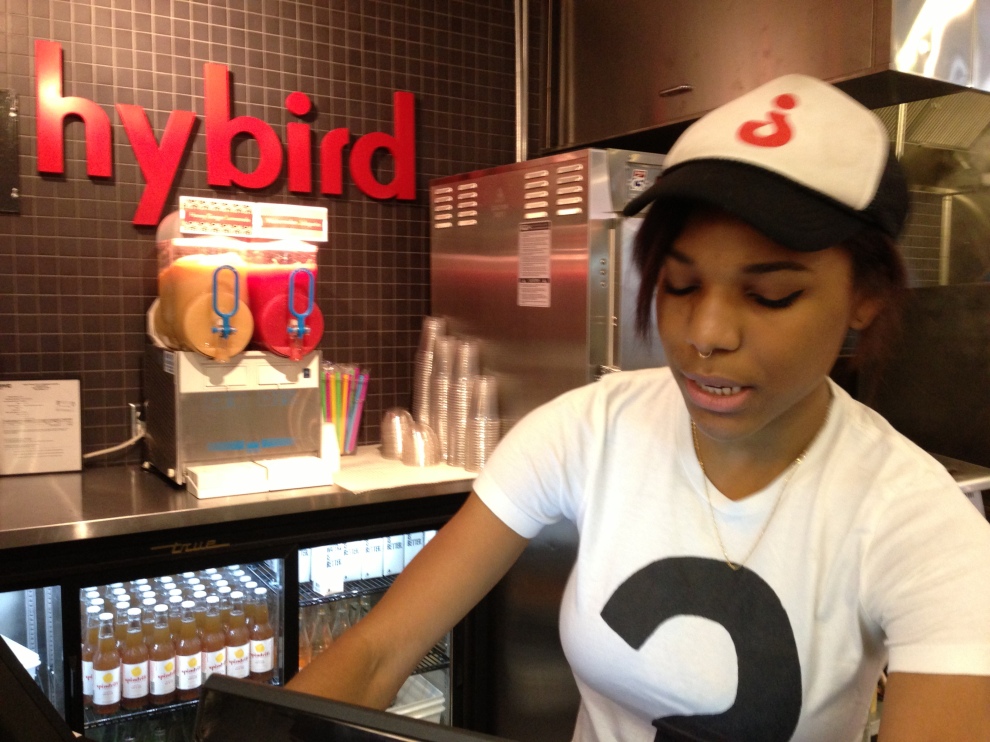 We got to the labyrinthine food concourse in midafternoon, ahead of the crowds, snaking through a corridor lined with dozens of teas, our stomachs rumbling.

The enormous Chelsea Market complex is located on the premises where the Oreo was developed and perfected, lending an air of sanctity to our excursion. 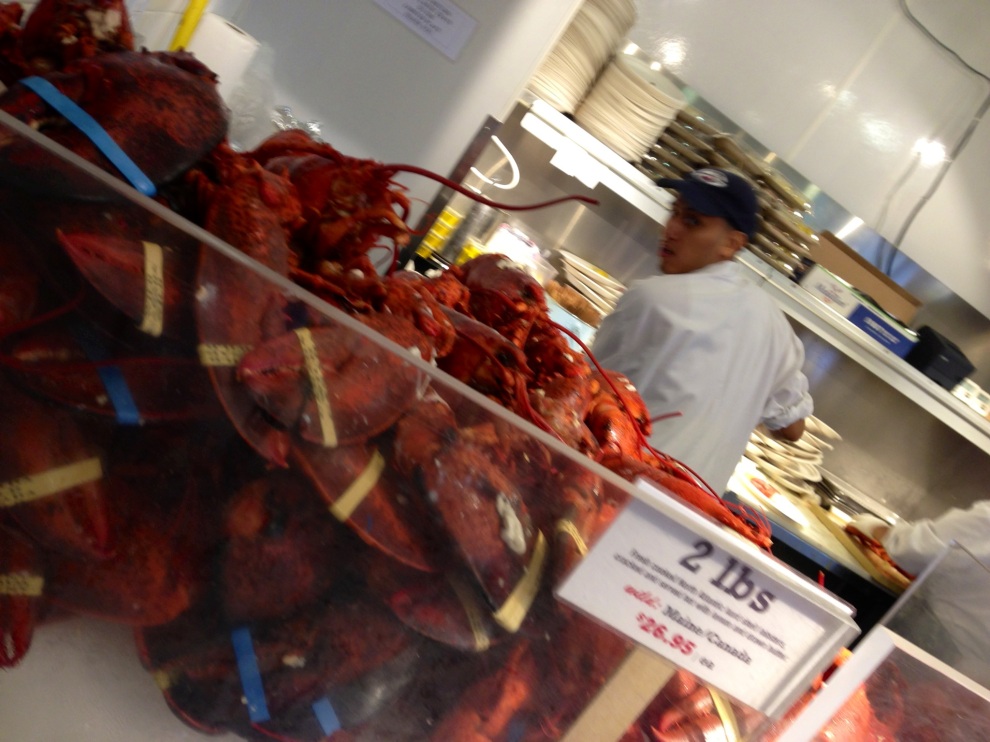 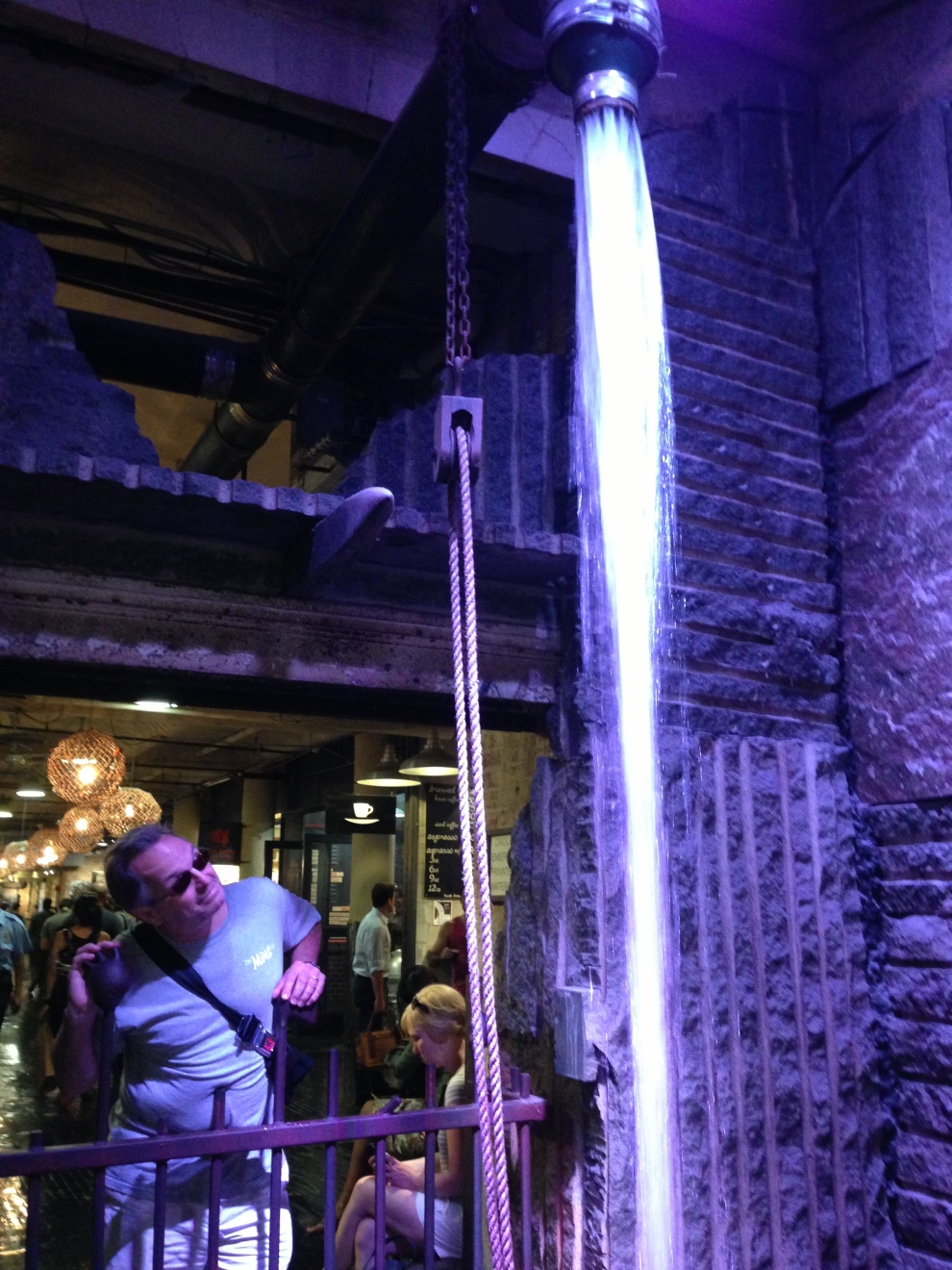 What it didn’t have before is this particular chicken. 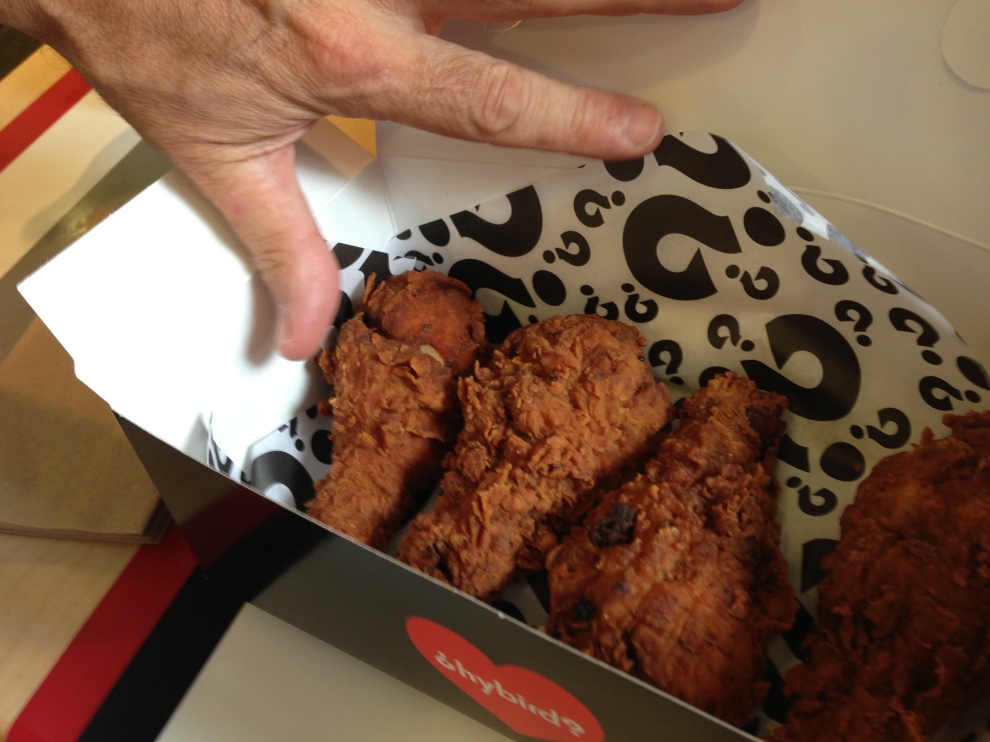 What is the seasoning, I asked Sammy, the guy double dipping chicken parts in a creamy paste behind the counter, when I managed to unstuff my mouth with chicken. 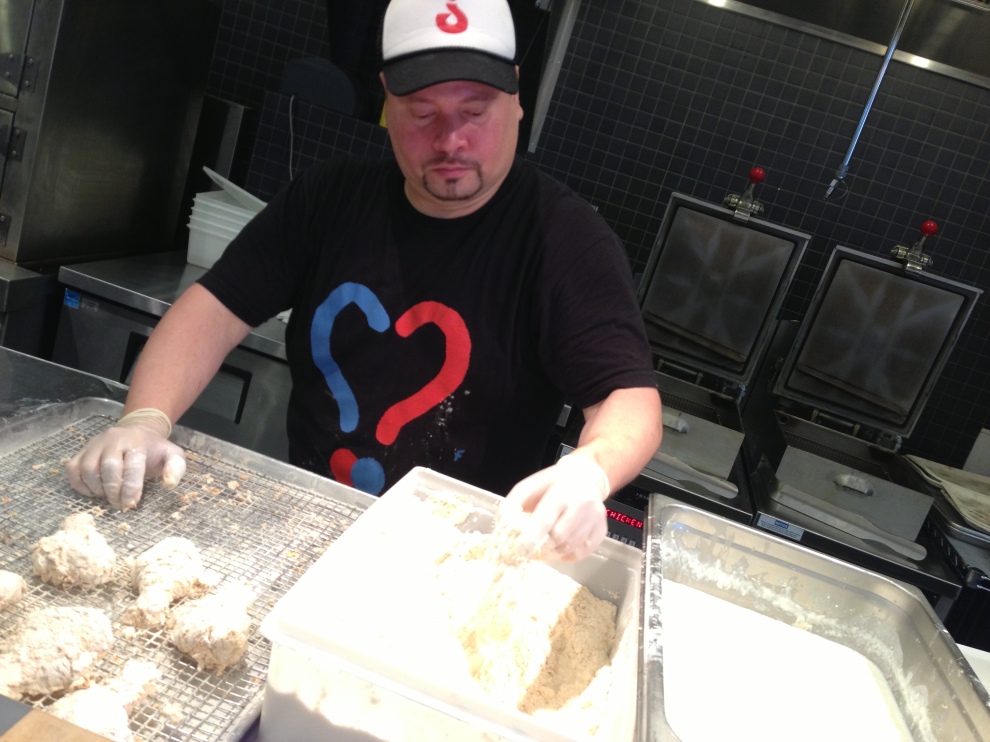 It’s a secret, Sammy said. A lady from Philadelphia comes in and mixes it up for us. She brings all the spices but she doesn’t tell us what they are.

I love a secret, especially when it tastes as good as this. The biscuit too was perfectly crumbly, smeared with honey butter, and we piled on further with crunchy dumplings that oozed out their sweet-savory crab filling when bitten.

Stencilled footsteps seemed to indicate where you should stand at Hybird, and naturally Gil was outside the lines. 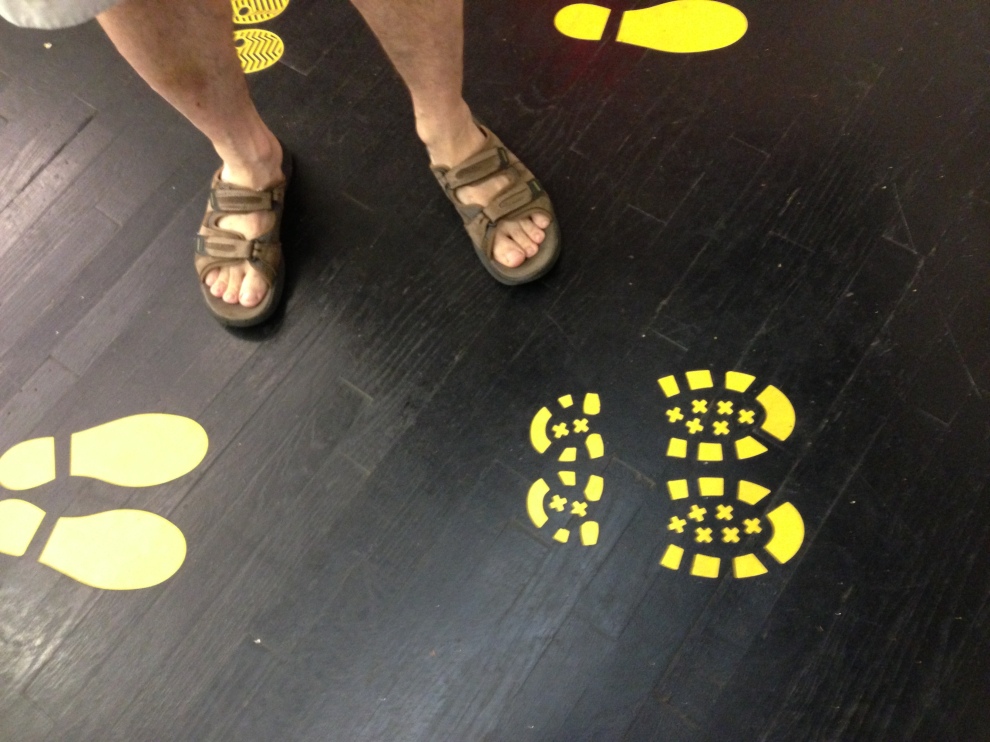 I saved the cupcake, whose flavor was described as “Sexual Chocolate,” for the car, a sexier environment than Chelsea Commons.

Nary a copy of The Orphanmaster in sight. It happens. I fell back on my motto, handily available on a postcard.

You never know who you will meet on a summer afternoon ramble around New York. In this case a young woman wearing a pair of the new Google glasses.

Wilma told me she’d just picked them up upstairs, in the Google offices, having won them in a contest. She said she was recording a video of me as we spoke.

Sated, Gil and I continued to the World Financial Center, in Battery Park City, directly across the Hudson from Jersey City. We were looking forward to a triple bill of bluesy rockers, or rockin’ blues players, depending on your perspective, on a public terrace that sits in the shadow of the Freedom Tower.

The sun shone so bright and hot that half the waiting crowd put up their rain umbrellas, a spectrum of colored and patterned domes across the concrete. New Yorkers are always more slovenly than they are expected to be, and serious exhibitionists. Women flaunted the briefest sundresses up to their backsides and sweat-slicked men ran shirtless through the crowd. In the harbor a stroll away, sailboats and yachts docked, and motor boats cruised in to check out the action. 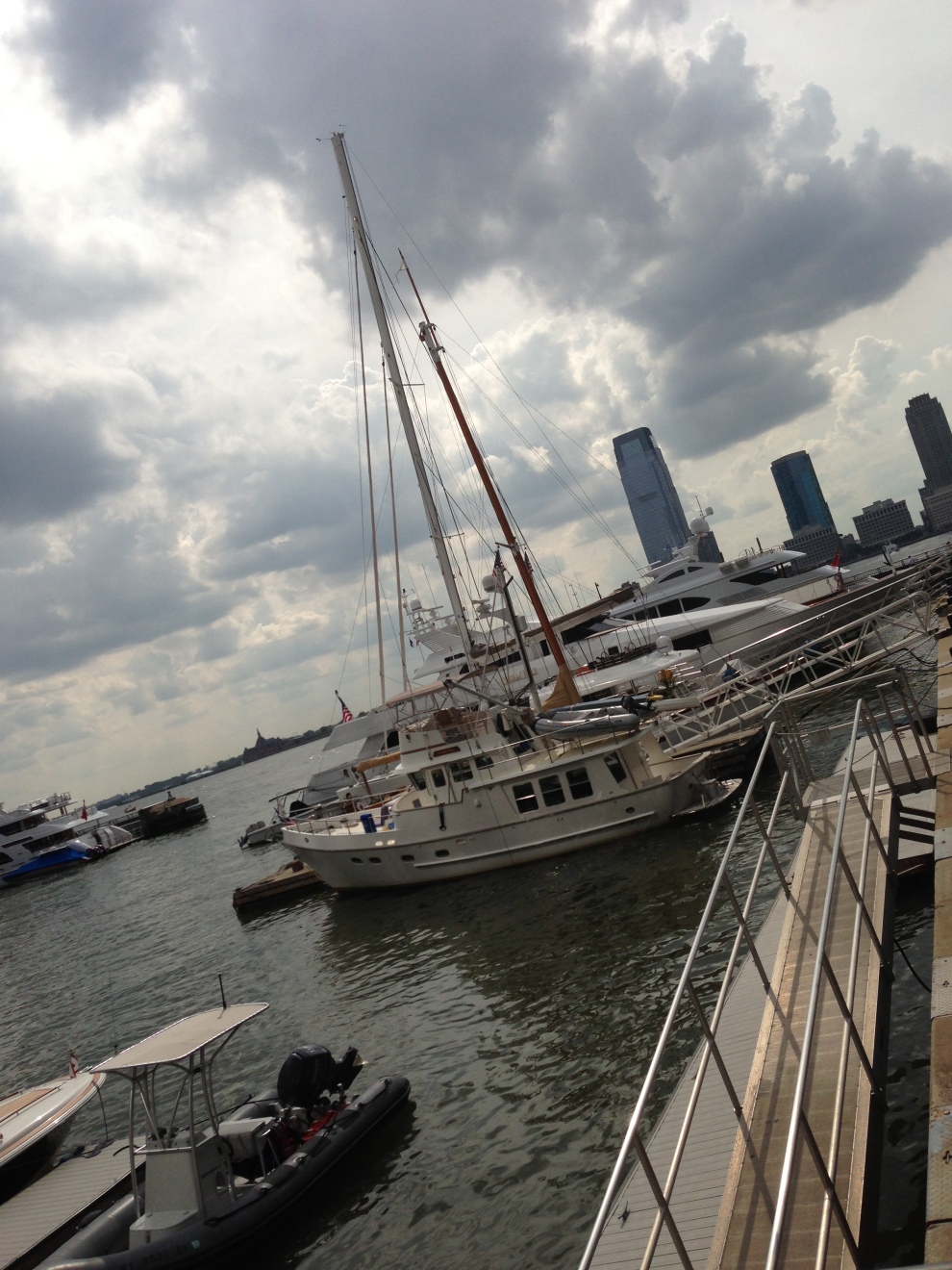 Alejandro Escovedo hit the stage with his sweet blasts of melody, punk rock in its roots. His song Sensitive Boys could make you cry, or was that the sun glare in your eyes. He brought on David Hidalgo to do a searing You Are Like a Hurricane. Alejandro called it the Canadian national anthem.

We met up with friends and family at the venue. My touselled buddy Sandra the artist-environmentalist noticed that the masts of the little boats were themselves rocking, pushed by the wind, in line with the beat of the tunes.

Los Lonely Boys, the Chicano rock band out of San Angelo, Texas, were tight. A trio of brothers, they call their music Texican Rock ‘n’ Roll. How can three guys make so much noise? marveled Gil.

The lead singer and guitarist Henry shouted above the applause, We appreciate it! We know you can be anywhere else!

And it was true of course, on this summer night, with this breeze and the salmon streaks of sunset glowing, in this fantastic city. We could be doing anything but we chose to be here because Heaven, their hit debut single from a decade ago, was so exciting.

Los Lobos followed, another American Chicano group, this one from California, with considerable chops that they took no time in putting out on the stage. They’d been around since the ‘80s, after all. The sun set, the klieg lights glowed, people wrapped their arms around each other and danced.

By the time we gathered our things, the skinny minx beside me who’d been flipping her skirt in time to the beat was sweetly reunited with her man. 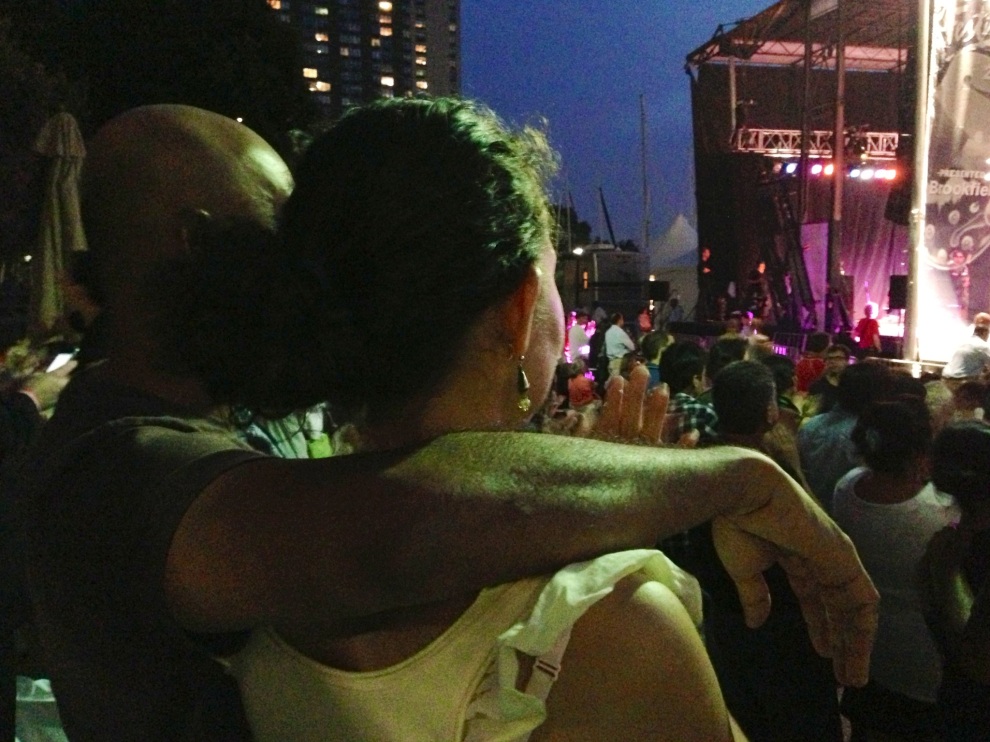 Love and music in sun-stunned, summertime New York City. A treat as scrumptious as fried chicken.

One response to “Blues Chicken”