In  Turkey, people are reading books. In public.

Which is amazing, considering the country’s recent history.

People are afraid of losing freedoms. And they’re finding a clever way to meet in public when demonstrations have been banned. Book clubs as free speech.

From Ataturk – which means Father of the Turks – who founded the Republic in 1922, all the way up to the present day, the country has had strong secular leadership.

Now the hardliners have come in. In Tacsim square the prime minister wanted to destroy part of a park for “redevelopment.” Somehow that struck a chord with the public and hundreds of thousands of people took to the streets.

The complexities of this story are better left for a political writer, but the numbers have already reached these totals, according to one source: 4,500,000 people provided their support for the Gezi Park Resistance; there were 603 protests in 77 provinces; at least 75 people were arrested; at least 1,750  injured; 3 people including one police officer died. There is an excellent visual timeline of the “ten days of resistance.” New developments are not promising.

As an alternative to the violence, the Turkish performance artist Erdem Gunduz chose to stand with his hands in his pockets, facing the Ataturk Cultural Centre in Taksim Square for eight hours.

Gunduz become the symbol of the resistance movement. Thousands of people emulated his action, standing still for minutes or hours around the country. “The Taksim Square Book Club” dovetailed with the still postures, and the books people are choosing form a reflection of their thoughtfulness in the face of this tremendous cultural upheaval. Albert Camus, The Myth of Sisyphus, about God and meaning. Gabriel Garcia Marquez’s Leaf Storm. Nineteen eighty-four. Turkish writer Tezer Oslu’s short story collection Old Garden-Old Love. When Nietzche Wept, a historical novel by Irvin David Yalom. Again, Nineteen eighty-four. 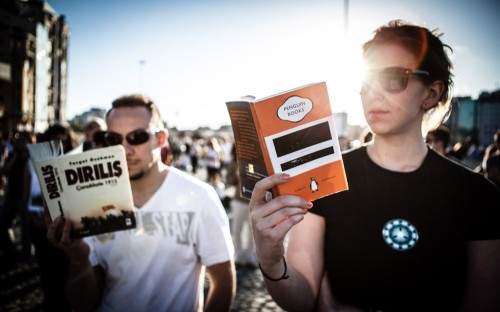 What would you hold?