Walled with dark wood logs, topped off with dark wood rafters, with dark wood planks underfoot, the Cabin can be a shadowy place sometimes. Especially when all outside is calling crazily that spring is here. I look out the window over my desk and see the bright glow of the marsh reeds, the heady blue of the sky, the sunlight cast over everything, and I can’t help but feel that the house I live in is… small. 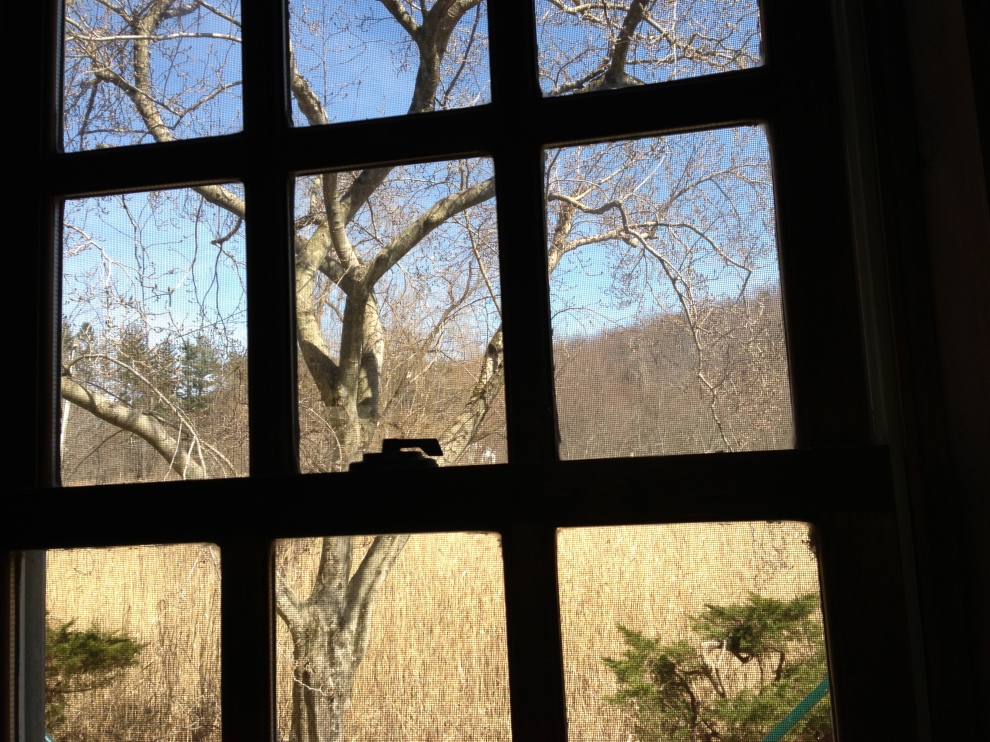 We have about a thousand square feet. Some of that number, I have to say, is stairs. I know people whose total window area measures larger. My friend Josefa tells me that how to live in so small a space is the way they do on ships, stowing everything when it’s not in use.

I never liked shipboard life. All our cubbies are full to bursting, plus we have out and available all the things we’re interested in at any one time. We scoot in between pieces of furniture, and sometimes have to tuck in our feet so they don’t get stepped on. Books clutter every surface. (Don’t say clutter though, that’s a negative, suggesting untidy or disordered – try “a wealth of books” instead.) I can barely see the surface of my narrow desk, covered as it is with slips of paper, notebooks, folders and stacks of books. Pots live out in the open in the kitchen, the cupboards won’t fit them. I just realized the aloe plant I proudly acquired and nurtured this winter has to be moved so the dutch door will open this summer. 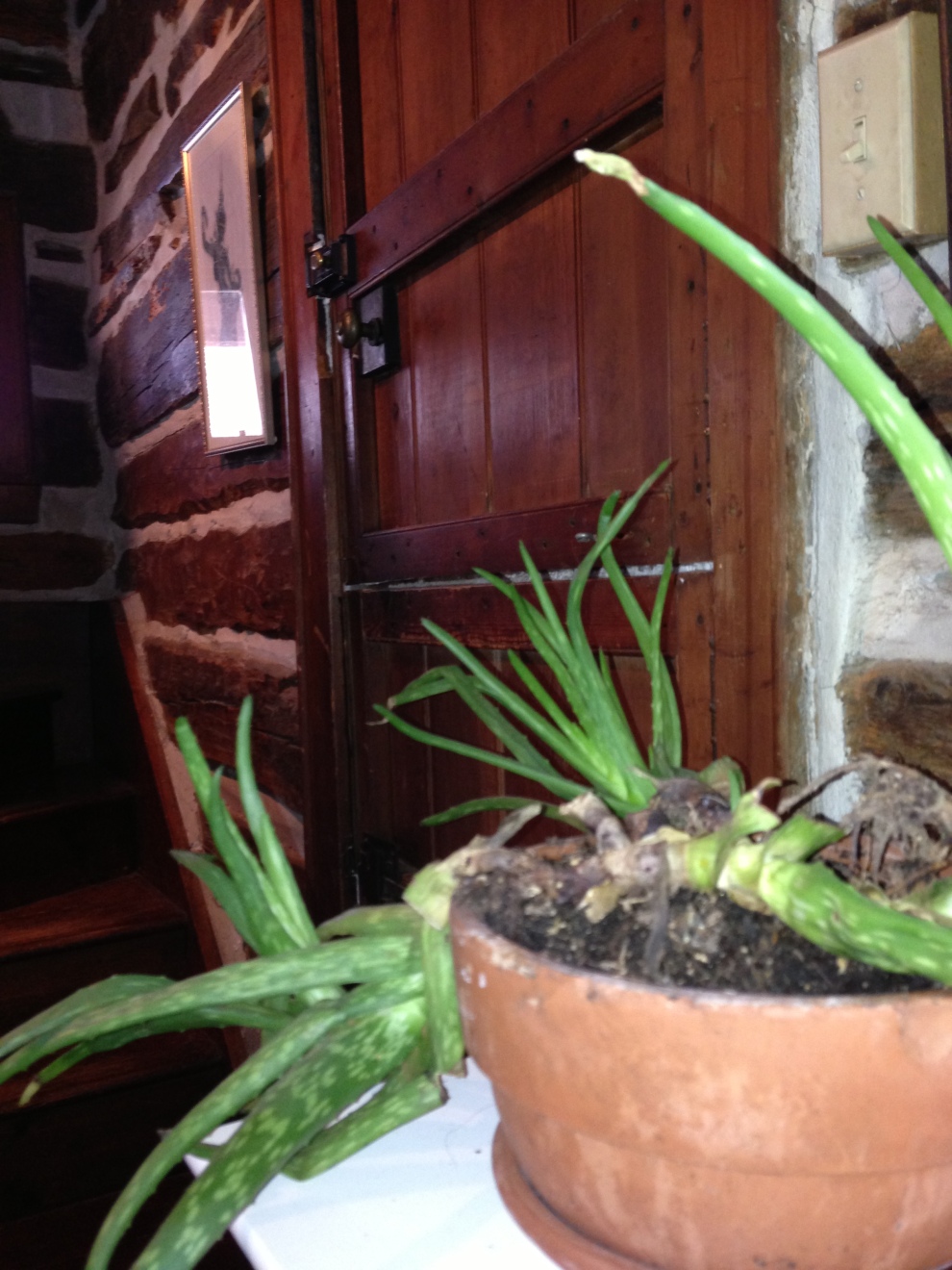 I like to write about peoples’ houses, and some of them have been big enough to fit the Cabin into many times over. Shadow Brook, for example, which the Stokes family built in 1893 in Stockbridge, Massachusetts. The rambling stone castle cost one million dollars to construct, and had an acre of floor space on each of four floors.

In Vermont a cabin built by a family named Hyde has stood since 1783. It’s a twin to ours, built during the same era, with similar materials in a near identical layout. 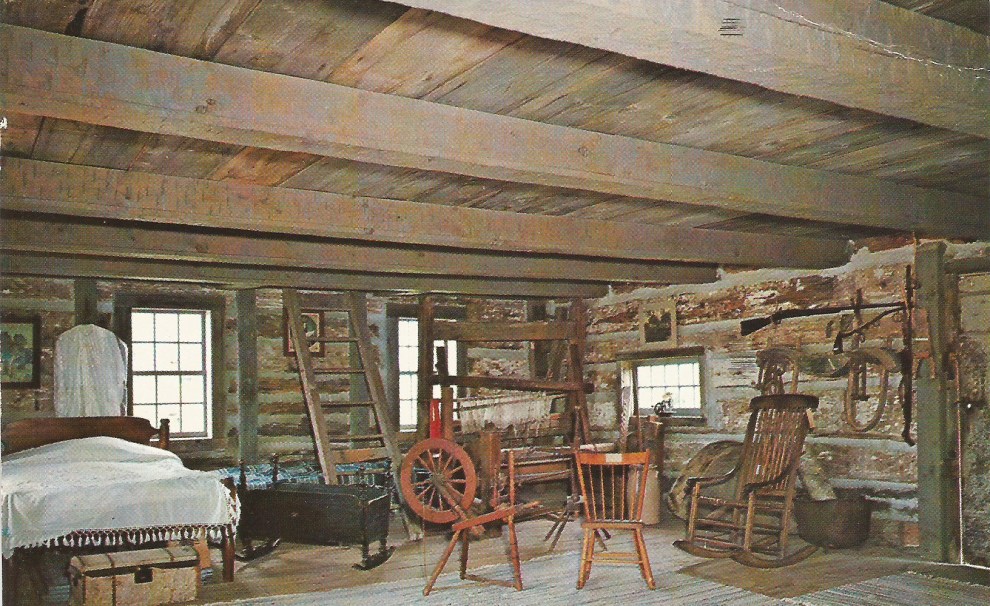 We do have another floor, also tiny, and a kitchen in the basement, neither of which was there when the Cabin first went up. It must have felt like such a haven when you came in with wet boots around 1800 to the fire roaring in the hearth and maybe a chicken on the spit.

Ours isn’t quite the tiniest home. I know because I’ve done a little sleuthing. 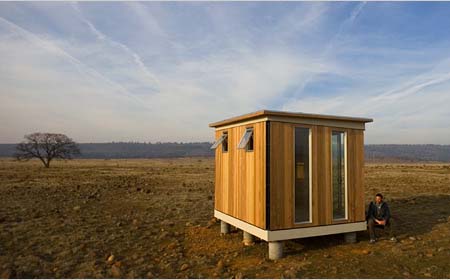 Last spring I visited a publishing convention in southern California, where I manned a table with advance copies of The Orphanmaster to be signed and given away. Just across from me, I noticed in between conversations, was a constant throng of people. When they cleared momentarily I saw that the author at that table was signing copies of Tiny Homes: Simple Shelter, a large-format book that was beautifully illustrated with pictures of places that some might say were suitable only for Tom Thumb.

At the book conference, every time I looked across the way there was the Tiny Homes author, replenishing the stacks that towered on his table from the cardboard boxes behind his chair. 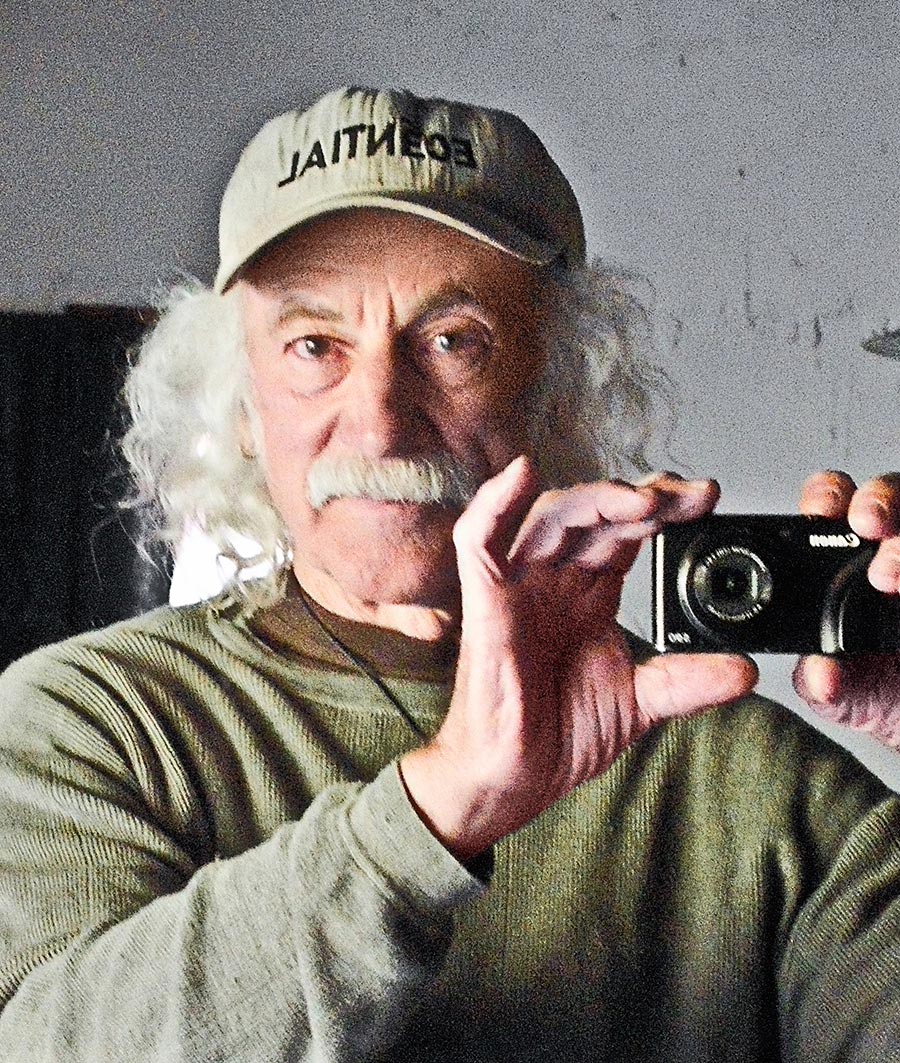 Lloyd Kahn, the author, was once upon a time the shelter editor of the Whole Earth Catalog and has spent his life building green structures out of interesting materials (sod roofs, poured concrete walls, plywood and aluminum geodesic domes), when he wasn’t surfing. At the convention, he also had adorable palm-sized souvenirs of his book, tiny books about tiny homes, one of which I took back to my own home. 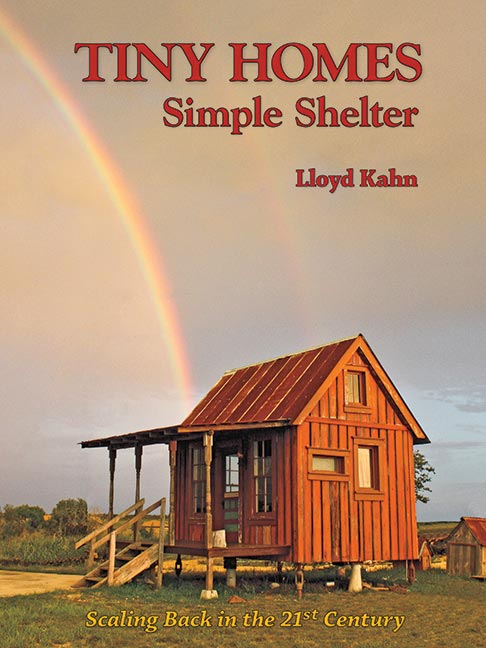 It made me wonder. The fantasy of a tiny home. All these people lining up for a glimpse into the peanut world presented to them by Lloyd Kahn. Who actually wants to live the tiny life? Besides Gil and me? 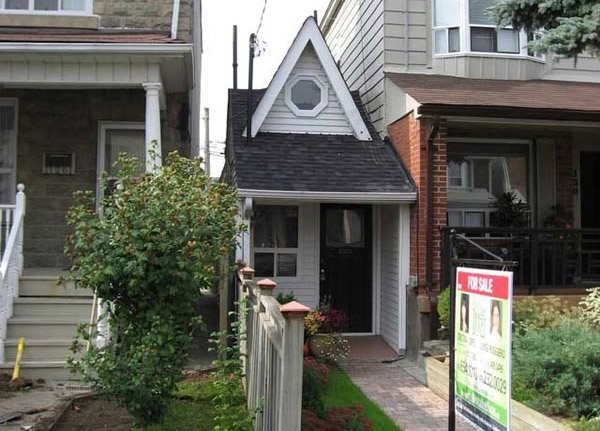 People who live in tiny homes see life as an adventure. 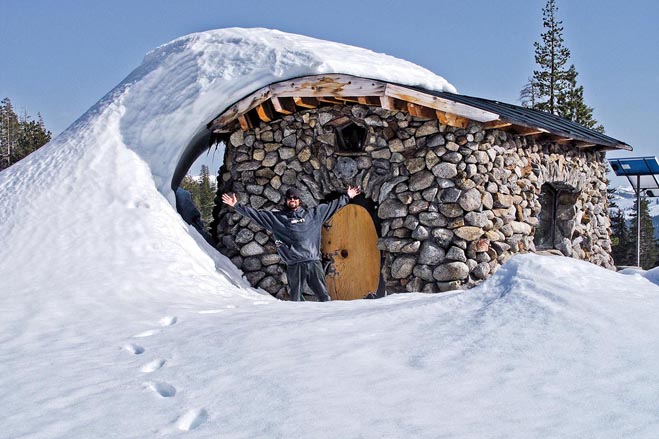 Edna St. Vincent Millay lived at 75.5 Bedford Street, in Greenwich Village, which was then and now Manhattan’s skinniest house. “Please give me some good advice in your next letter,” wrote the poet. “I promise not to follow it.” Her narrow domicile had only 999 square feet and was 9.5 feet across in the front. Last I heard it was on the market for 3.95 million dollars. 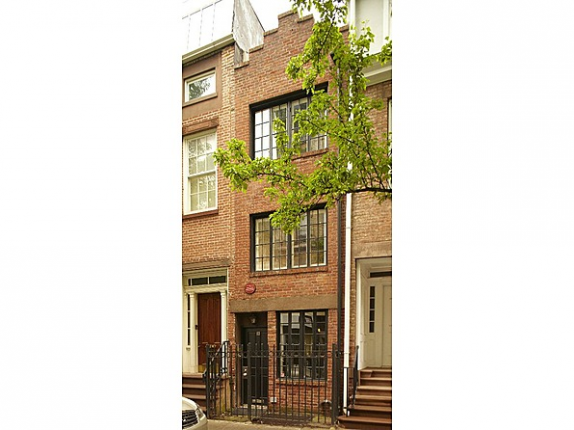 I checked out a web site for people who want to buy, sell and rent tiny structures. Tiny House Listings offers homes of 1,000 square feet or less.

Could anyone not love this caravan? A kind of giant beer barrel on wheels. 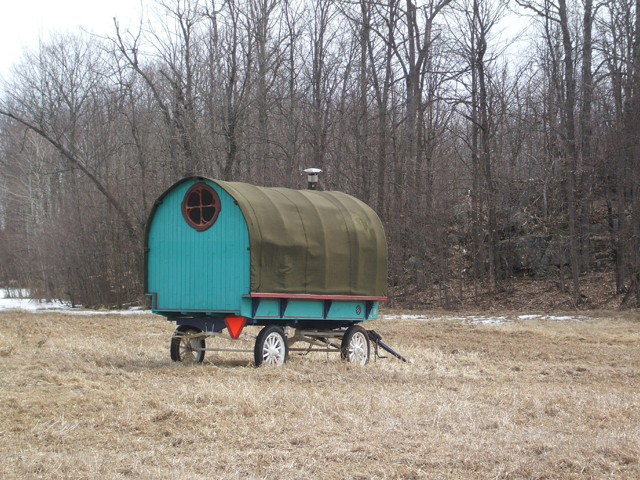 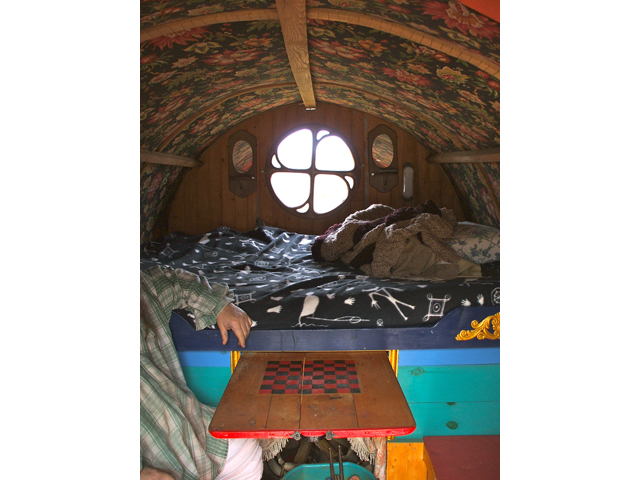 For a bit more you could have this hobbit house, an A-frame in Granite Falls, Washington. 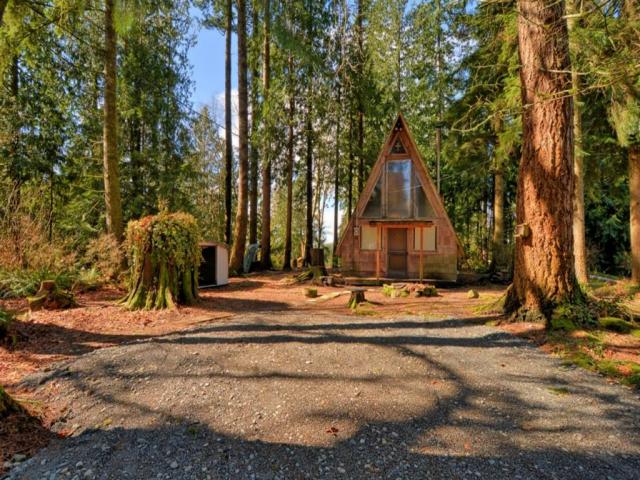 Or rent. For 400 a month you can stash your stuff in this green house’s cubbies. 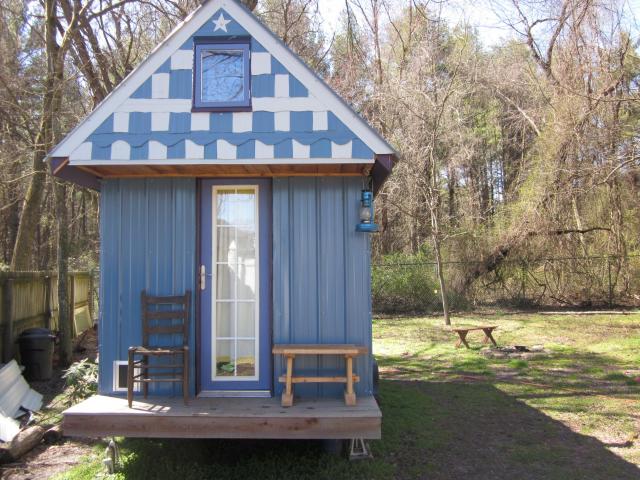 The web site allows you to dip inside and get the big picture, so to speak, before you commit to the Tom Thumb lifestyle. 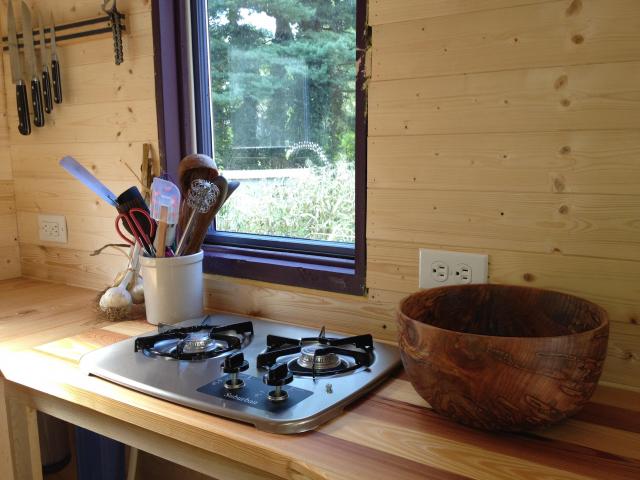 For a galley, it looks more spacious than the Cabin. Maybe it’s all that clean, smooth, un-lived-in pine.

One response to “Tiny Houses”