Getting a Head of Myself

I really wanted the headcheese. Or headcheeses. There were quite a few at the Polish food shop.

But we ended up with kielbasa, which hung high above the many other types of wursts on display.

I am the only one in my household that will deign to consume a pressed, jellied concoction of bits of pig’s head, heart and other rather downscale meats.

I wondered how the dish came about its name, since it has no cheese in it.

The chef Brad Farmerie gives this derivation: “The word fromage comes from the Latin word forma, which translates as a basket or wooden box in which compressed curds were molded to make cheese. Forma, and then fromage, became the word for cheese, but also remained synonymous with the concept of molding and pressing no matter what was being formed. Thus, the forming of a pig’s head using a mold is called fromage de tête and translates more to “pressed head” than anything to do with cheese, but we English speakers ignore a few of these minor details and use the direct translation to come up with the delightfully unusual ‘headcheese’.” Farmerie has a recipe on his site, along with  a vivid photograph of pig snouts rising up out of a steaming pot that I can’t bear to include here.

It’s a little hard to enjoy pork, I find, when you knew the pig. This summer we laughed at the hijinks of the piglets my nephew was raising in Wisconsin. They rooted where they shouldn’t and skipped about and were delightful pests if not pets. Not so many months later, we were the recipients of a tasty haunch – Gil cured and smoked it and we’re still eating the ham. But its savor, as fine as it is, can’t be separated from the memory of those young, peppy swine. In my mind, at least.

Pickles are a good, pork-free food. 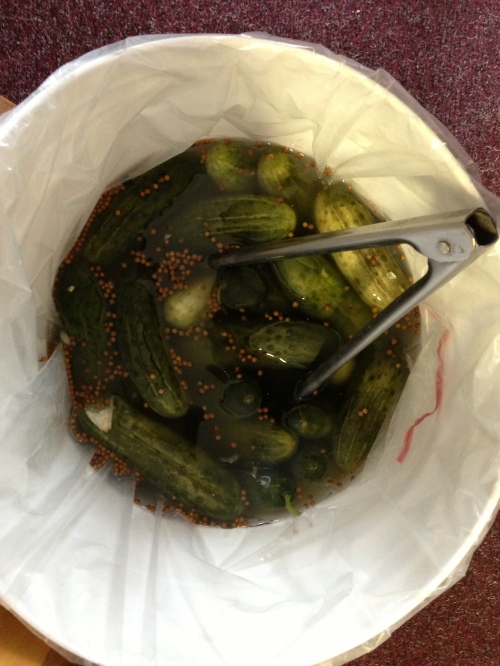 Mushrooms, too. Especially Milky Cap mushrooms, whatever they may be.

Today we stocked up on pierogi, saurkraut, and other fixings for a Polish feast. The Pole in me – my paternal grandparents’ line, who lived around Lodz – salivated, even though as Jews I don’t think my progenitors would have stepped in a store whose main product was pork.

There are a few things I don’t eat, but I am proud to say I create my own dietary restrictions, which I am free to break at will. Serve me an oyster today and I may decline, but next week I’ll scarf it down. Especially if it’s in the oyster stew from the Oyster Bar at Grand Central. I’m girding up to try escargots again, too, as long as they’re swimming in garlic butter.

It’s all good, as long as I have my slimming coffee to round out the meal.

One response to “Getting a Head of Myself”